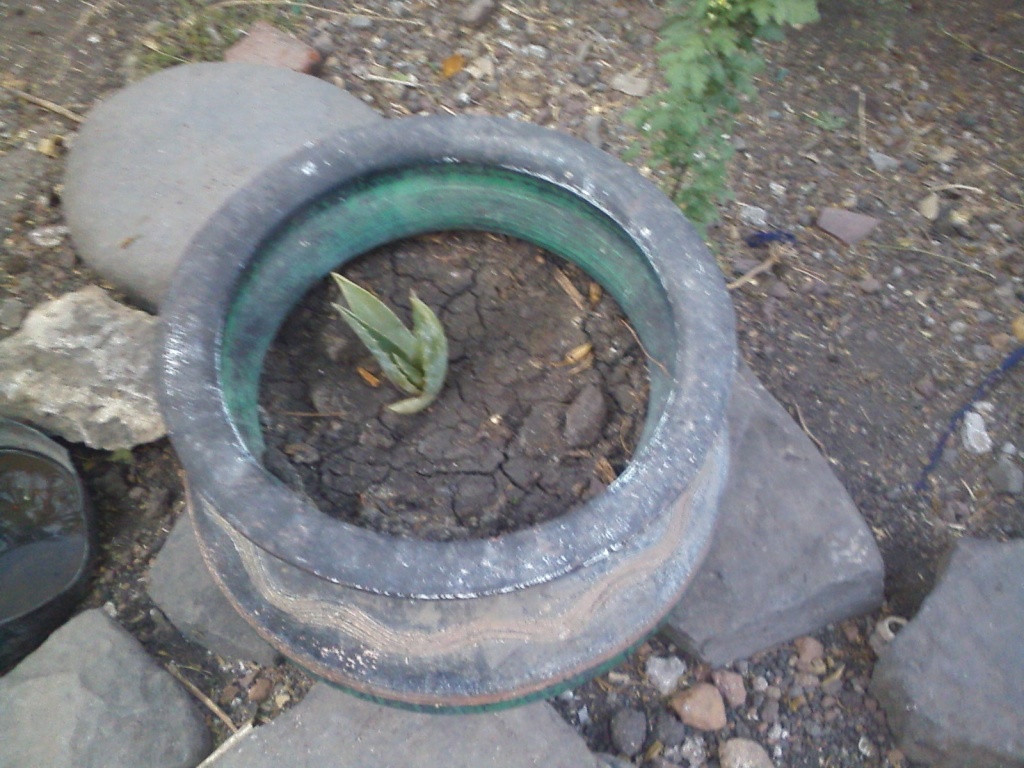 Even before moving to México, I had known that aloe vera could be used for burn treatments.  I now know that aloe vera (sábila) has more uses than that. Sábila has been used since the time of the Mayans as a miracle plant, treating everything from cavities and cancer to brujaría (witchcraft).  The most potent part of the plant is the clear gel found within its long spear-like leaves.  This gel works as an astringent, pain killer, and coagulator.   It contains beta carotene, Vitamin B, niacin, riboflavin, Vitamin B6, folic acid, Vitamin B12, Vitamin C, and Vitamin E as well as calcium, phosphoric acid, and iron.  Sounds like a breakfast of champions to me. Sábila can be used to boost the immune system, regenerate damaged skin cells, as an antibiotic, reduce arthritis inflammation and pain, and stop bleeding.  It can be used as a topical agent or ingested by being made into juices or teas, although having accidentally eaten a bit that was on my toast one day, I’m not sure how delicious a tea would be.  It has an acrid taste.

So there is some basis in it being a miracle plant.  My husband had heard that it could be used in treatment for athlete’s foot, so one day he cut what he thought was sábila (aloe vera) and rubbed the gel on his feet.  Unfortunately for him, he had mistakenly cut a leaf from the maguey plant and the result was an extreme burning sensation rather than the itch soothing he was looking for. Since then, he has gotten savvier in his plant identification and has used sábila successfully in healing animal wounds. (See Animal Doctoring) When my sister-in-law was being plagued by brujería (witchcraft) being caused by envidia (envy) she bought a sábila (aloe vera) plant and placed it at the entrance of her tortillería (tortilla shop) to absorb any bad feelings being sent her way. (See Battle of the Brujas) Sábila used as a ward against evil should be placed at the left of the entrance and would be even better if there were two plants, one at either side of the entrance. I even found a little prayer that can be used in conjunction with incense made from sábila, balsam, ground coffee and sugar.  It goes like this: Cruz santa y divina, bujas y brujos: Enemigos que piensan llegar a mí, estoy con Dios por el poder de Cristo, que ha dado en el huerto de la fe.Oh! Dios. Pido que alejes de mí las tristezas y ruinas que vengan hacia mí.  Dios soberano, líbrame de las penas y las traiciones, que bendita sea María y la hostia de la consagración.  María Santísima, cúbreme con tu manto, que mi cuerpo sea parte de cielo, por los tres dulces nombres de Jesús, José y María.  Con Dios y esta mata, sea la prosperidad en mi vida y en mí y en mi casa, Jesús, Joaquín y Santa Ana, líbrame de todo mal. If the plant wilts or dies, it means that someone has had envy or bad intentions toward you and the plant absorbed the negative. There is also a belief that if you plant a sábila with a coin at the roots, the household will never lack money.  Since my husband recently transplanted two wild sábila to our backyard, it’s a perfect opportunity to test this out.  We sure could use that bit of financial wizardry. My little guidebook Antiguo Formulario Azteca de Yerbas Medicinales also has a section devoted to sábila.  For back pain, the halved heated penca (leaf) should be placed on the part that hurts or in inflamed to relieve pain.   For bronchitis or cough, a tea can be made with a little piece of sábila, 10 eucalyptus leaves and 10 flowers from the bugambilia morada plant (bougainvillea) and drunk an hour before going to sleep.

As with all customs and beliefs that we have discovered among our many adventures and disasters in México, we tend to err on the side of belief rather than skepticism.  As they say “When in Rome…

Having as many animals as we do guarantees that some will fall sick on occasion, no matter how attentive we try to be.

For instance, there was that horrible week when the hens would get the hiccups then fall over dead, and we had no idea what to do.  It did eventually run its course, but we lost 5 chickens.

Then there was the sad event when our new puppy somehow managed to get on the other side of the wall and was accidentally stepped on by Beauty.  Sometimes the only thing to do is to sit by an animal’s side.

But in other instances, the illness or injury is completely treatable, if you know how.  My husband often calls me to “traer el libro” (bring the book) for me to do some on the spot research on a new symptom of one or more of our animals.

Our library is small and consists of Barnyard in your Backyard and Keeping Livestock Healthy, but for the most part, that’s enough. 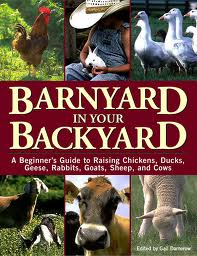 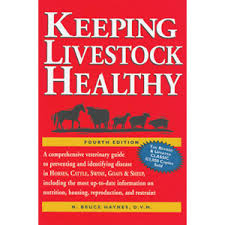 When our rabbits kept getting sore hocks, we changed the entire way we kept rabbits, from caged to free range, well, within our yard range anyway based on a section of the Barnyard book.  When the chickens looked droopy, my husband cut a hole in the wall so that they could forage in the goat and horse poop while those animals were grazing, and sure enough, the extra vitamins did a world of good, all based on the Healthy Livestock book.  When one of our nanny goats developed mastitis, we checked the books to see what we could do and did what we could to ease her agony until the infection cleared up.

In addition to our resource books, there are local folklore methods concerning the care of animals. Fortunately, my husband is not one of those men afraid to ask for directions, when it comes to the welfare of his animals that is.  Some of the information he gets seems to be a bit hokey at times, so we cross reference with our books.  If the treatment appears to have some sort of valid basis and not entirely dependent on the warts of a frog during the lunar eclipse, he often gives it a try.

My husband has treated swollen eyes with a spit of salt water.  The first patient was Duchess, the goat, who was accidentally hit by a slingshot stone. (Apparently, there was a passing squirrel my son was aiming at.)  A spit of water and the swelling was completely gone within the hour.  The second patient, Shadow the yeguita (female colt) also was struck by a misdirected stone thrown to scare her back from jumping a fence that was much too high for her young legs.  Again, the spit of salt water, my husband actually spits into the eye, and the swelling went down.

The most recent examples of this folklore animal medicine can be illustrated with the unfortunate injuries sustained by our horses, Beauty and Shadow.

Beauty came up lame one day and what appeared to be a superficial cut above her front hoof became a gaping hole overnight.  My husband thinks that she opened it with her own hoof while dancing. Yes, she actually dances continuously in her stall at night.  As it was on the bend of her foot, it could not be sewn up. He was, at first, dismayed and unsure how to help in the healing since she opened it anew every time she went out to graze.  He asked around.  One person told him to echar aqua de la mata de toro (bull’s weed water).  Another told him to cover the wound with hoja de sábila (aloe leaves). 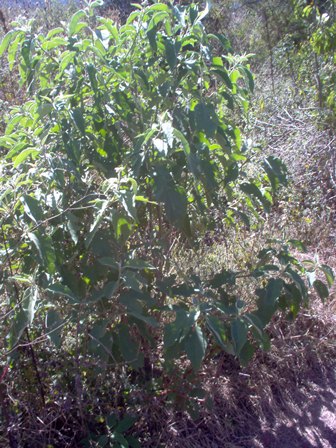 Now, I had never heard of mata de toro (bull’s weed), so I couldn’t be too sure of its effectiveness. However, aloe is a herb that I know to have soothing qualities for burns and endorsed its use.  Beauty’s treatment ended up being a periodic dash of Azul (Blue) for infection, a daily wash with boiled mata de toro (bull’s weed) and an overnight bandage of sábila (aloe).  The Azul we purchased at a local vet place, but the other two herbs grew wild in La Yacata, and it was just a matter of harvesting. Her wound is slowly healing, and we hope she will be back up to her regular dance routine soon.

Shadow also recently sustained an injury.  One day, she wandered a bit from where her mother was grazing and tried to leap a barbed wire fence.  She’s only 6 months old, so she really didn’t know any better.  A good section of her skin on her underbelly was ripped open, the fur hanging off in one big sheet.  Poor thing.  My husband called in a more experienced horse keeper for advice.  He brought a needle and thread to sew her up.  Of course, she wasn’t too keen on this procedure, so she had to be lightly sedated.  Even under anesthesia, she kicked out several times and had to be held down to get the stitches in.   This was quite a group project.  In attendance in the operating theater, a.k.a. Shadow’s stall, was the tailor, my husband and his father for front and back leg holding, my son, for head holding and nerve soothing, and my sister-in-law, the light holder.  I stood outside the stall and ran for things like clean water to wash with, alcohol to sterilize the needle, rags for blotting, etc.  Beauty, the anxious mother, was behind me looking on and expressed her emotions noisily every few minutes. It was over in about 30 minutes and took another 30 minutes or so for Shadow to recover from the sedative.

In the morning, my husband made a dressing from hoja de sábila and fashioned a bandage out of a costal (feed bag).  He heated the aloe leaves on the comal (tortilla pan) so that the juices would run well.  Then he cut the sharp edges off the leaves and sliced them down the middle.  The inner sides he placed up so as to be the part that touches the wound and tied on the bandage.  We also have been using periodic treatment with the Azul, which is an animal antiseptic, although it is more purple than blue and a round of penicillin and tetanus shots just to be on the safe side.  We are all hoping for a quick recovery for our little lady.

Attaching the bandage with the aloe vera poultice

I won’t say that we know everything about healing animals and we may yet discover that what we do on these occasions is not the best way to treat injuries, but we do what we can with what we have and have found that the natural remedies offered in our area often outdistance any man-made chemical when it comes to effectiveness.