The Show Must Go On

Who says life can be boring during self-isolation? Not me, that’s for sure. Our animals have all decided that they are circus stars or at least TV stars and there’s never a dull moment around here!

You already know about Jolina and her kids, who believe they are part of a circus routine, rolling out the barrel just 20 minutes after birth.

Now we have Mama Chicken and the Magic School bus.

Our broody hen finally hatched some pollitos. She’s been an attentive mother for the most part. She kept them safe and sound in the corral for a week. Then, suddenly, one day, we hear this clucking and peeping symphony. My son ran out there yelling, “She’s decided to take them on an adventure!” And sure enough, there they were, under her wing, peeping excitedly as they left the corral.

We aren’t exactly sure what Terry will do when confronted with these chicken nuggets on legs and we weren’t ready to risk it, so back into the corral they went. My son said that she was like the teacher on the Magic School Bus cartoon. “Ok everyone, get under my wings. It’s time to head into the volcano!” Although, they may have been headed through the digestive tract instead.

Then there’s Fuzz, who has decided in retribution for the arrival of Cocoa, he’d become Douglas Fairbanks. On several occasions, he’s tried to slide down the blue screen I have for work, much like the sails of a pirate ship.

Cocoa is not one to be left out in the starring role. He’s decided that every moment possible would be a WWF session. Fuzz is the competitor whether he’s up for a romp or not. Starting as early as 5 am, Cocoa is ready for round one!

The Puppers continue their gladiator reenactments every time my son heads out into the back yard. Those of us about to die, we salute you! BATTLE COMMENCE! George, of course, takes on the starring role as the head dog. I will vanquish you, Fred!

Red has been fitted with his first saddle. He’s too young to be ridden, but my husband has been having him run in circles with the saddle on so that he becomes accustomed to it. Lady has a new set of shoes and happily does a little tap dance every time her hooves hit the road. All we need now are the elephants, and we’re good to go!

Terry’s contribution to the Greatest Show in La Yacata is fairly dismal. Every day, without fail, he bolts from the gate and drags my son out the door, nearly dislocating his arm. That’s really is one and only trick. Too bad he seems unwilling to try some of these tricks!

So, with all our barnyard animals joining in, quarantine, or no quarantine, the show must go on!

Tagged as animals do the funniest things, having pets, homesteading, Pets, quarantine with pets 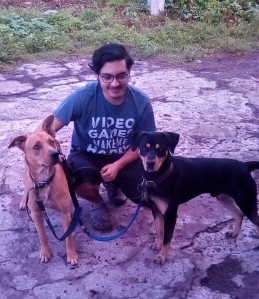 George on the left and Fred on the right.

The other day, it was raining, which is no surprise because we are in the rainy season after all. My son dashed out to feed the horses and left the back door open a crack. He was gone maybe five minutes and came back to find the door wide open and muddy paw prints all over the place.

He hollered for the dogs. Fred came dashing out from the garage so fast he slid on the tile like a cartoon. George came tumbling down the stairs with the cat’s food dish in his mouth. The fact that it was George who went upstairs puzzled us because Fred is the sniffer. He’s able to smell food like nobody’s business. George, as the head dog, then appropriates Fred’s find. But in this case, it was George who immediately headed upstairs.

After the dogs were outside and Fuzz’s food dish reclaimed, we followed the tracks to try and figure out the series of events that led to the Great Heist. It seemed Fred was sent as a lookout to the front door, while George went upstairs and found Fuzz stretched out on the bed. He must have taken a sniff or two of this recumbent feline, who paid him no mind. The muddy paw print on the blanket was left in evidence.

Then George grabbed the food dish and hurried back downstairs when my son called. So how did George know there was food upstairs? Was it a crime of opportunity, or had deliberate planning gone into it?

We’ve come to believe that George has been plotting this escapade for a few weeks now. You see, when Fuzz, his royal highness, isn’t happy with his food selection for the day, I drop the leftovers from the back porch to the dogs. I’ve seen George puzzling out how I come to be up on the porch and how to get there himself. With the opened door, George seized the opportunity and took it upon himself to get today’s leftovers (although Fuzz hadn’t properly finished with them yet).

We’ll have to be more cognizant of open doors now. Once a successful heist has occurred, from now until infinity, the two scoundrels will be casing the joint, looking to take another run at it. Meanwhile, Fuzz will lay there and observe it all.

Fuzz has been with us for about a month now. He’s gone from a small fluffy bit of fur into a much larger curious beast intent on practicing his pouncing skills every time one of us comes out of the bathroom. His larger size has increased his jump height as well, so nothing is out of reach anymore. We’ve tried babyproofing some areas, but who’d have thought the baby could get up on top of the piano at his size and age?

Fuzz has also been working on training us to meet his demands. He enjoys chin rubs and belly tickles at regular intervals. His food consumption has increased and his way of letting me know that he needs more sustenance is to bite my toes furiously.

He’s been pretty good about using the bathroom outside in his litter box. For a while, he was using my back porch planters as a giant toilet, but I’ve replanted it with spikey plants and that seems to have taken care of that.

He’s learned how to let himself in and out of the house should we be tardy about opening the door. When he wants to go out, he launches himself full force with a running start at it, as if he’s on platform 9 ¾ with a luggage trolley heading to Hogwart’s. He can open the door from the outside when he’s really determined as well. He shimmies his paw underneath and pulls. He doesn’t always get it open enough to dash through but the banging he makes is enough to wake me from even the deepest slumber and open the door for him.

This morning, we left Fuzz alone in the house for about 30 minutes. We came back to complete chaos. He had gotten into a bucket of car oil my husband left in the garage and tracked it throughout the house. This meant a whole-house double-time mopping session and a bath for Fuzz which he didn’t enjoy at all. Not all the stains came up and my daybed cover is ruined.

Our other animals are practicing their magic tricks as well. Terry chewed through his third leash in a fit of jealousy while we were walking the Puppers. Fred and George have discovered that if they team up with Lady, between the three of them, they can remove the bars that keep Lady in her stall so she can mosey on out for a sweet nispero leaf snack. They were so proud of themselves that my son didn’t have the heart to scold them. You should have seen their beaming faces and wagging tails.

Fred has adopted his own chicken pet. Perhaps it’s his familiar? The rooster had been pecking the living daylights out of one of our gringa chickens. She took refuge with Fred and George under the rain tarp one day. Fred wouldn’t allow the rooster to come in out of the rain. Since then, Ms. Gringa eats, sleeps, and cuddles up with Fred, her savior.