In this class, you’ll be able to explore the viability of adding one or all of 19 native Mexican plants to your garden. Each lesson contains growing and harvesting tips, historical and medicinal information, and a recipe or remedy so you can enjoy the fruits of your labor.

You’ll also receive the 58-page Wellness Garden booklet with plant studies and illustrations done by the talented Claudia Guzes AND the 38-page Works Consulted bibliography so you can conduct your own research.

After all, in the spring, a gardener’s fancy lightly turns to thoughts of plants, or so I hear. So, let the planting begin!

Mexico is one of the most megadiverse countries in the world. It is home to over 200,000 different plant and animal species. There are 707 known reptile species, 438 mammal species, 290 amphibian species and 26,000 different plant species. Mexico also has a great variety of ecosystems including desert, mountain, coastal, temperate and tropical climes.

You would think that because of its extreme diversity, Mexico would not be at risk for crop failures, food shortages and famines. Unfortunately, that isn’t true. Governmental policies, climate change and dangerous internal conflicts have had detrimental effects on the crops produced in Mexico in the past and present.

Historically, tree rings have indicated that severe droughts hit Mexico of the sixteenth century (1545-1600), 1752-1768,1801-1813, 1859-1868, and the 1950s causing food shortages in much of the country. Drought may have been the underlying cause of the political instability that destroyed pre-hispanic civilizations like those whose pyramids stand in Teotihuacan.

The Codex Ramirez records a drought that lasted from 1450 to 1454 which caused a mass exodus from the center of Mexico. The Aztec Empire had a supply of maize to distribute however by 1454, the famine was so severe that the common people sold themselves or their children into slavery in record numbers of which many were sacrificed to elicit help from the rain dieties.

The Spanish conquest did little to alleviate food shortages among the indigineous people of Mexico. Between 1521 and 1821, there were 88 drought periods. Although more advanced irrigations were set up by the Spanish, the crops were not evenly distributed among the inhabitants even as prices for meat and corn rose. In 1785, drought caused the starvation of more than 300,000 indigenous in Mexico. Historians have determined the colonial government was set up so that large landholders and merchants had the ability to price basic necessities out of the range of most of the population.

This type of governmental setup remains alive and well in Mexico. Increasingly over the years, Mexico has become more dependent on imported goods from other countries. During periods of low food production, as happens when there is an extended drought, importation rates grow to make up the difference but at a higher price.

The shift in the focus of Mexican agriculture encouraged by the government, from drought resistant corn and bean varieties to forage and vegetable production, has placed a large demand on groundwater available. Additionally, the expansion of cities has redirected large amounts of water that previously had been used for crops to meet the needs of urban dwellers.

Avocados are another crop that has periodic shortages, not because of drought, rather due to violence over control of the areas where this “oro verde” (green gold) grows. The state of Michoacan is the only one authorized to export this high-demand fruit. In 2018, the sale of avocados, mostly to the US, raked in more than $2.5 billion, which is more than the proceeds from petroleum.

Many farmers have given up growing other produce to concentrate on the more lucrative low-hanging fruit trees. Large areas have been cleared to make room for even more trees. Crop diversity is at an all-time low in the area. Growers are dependent on the avocado crop and yet are forced to give a large portion of their profits to the cartel or risk not being able to sell any of it.

A different kind of event that caused food shortages in many areas was the restructuring of the gas distribution method in January 2019. The newly sworn in president AMLO closed the gas line pipes that run throughout Mexico in order to stop theft. However, there were not enough other ways to distribute the gas and areas in the interior of Mexico were without cooking and gas for vehicles for nearly two months until more vehicles were purchased to move the gas. The gas shortage meant that food delivery was intermittent or non-existent in some rural areas.

Food shortages, whether they are short or long term, are difficult to manage if you haven’t prepared ahead of time. Here are a few suggestions on how best to get through.

Grow Your Own Food

Begin by growing some of your own food. If you have space, plant a garden. If our space is limited, try container gardening. Consider share-cropping to supplement your food supplies. Research which plants will provide food year-round or decide on two seperate planting sessions, one for the growing season, one for the dry.

In our area, corn is grown during the rainy season which begins in June. After the corn has been harvested, most areas are planted with garbanzo for a second crop instead of letting the field lay fallow until the following June.

I grow a number of herbs which provide me with delightful teas and seasonings. They don’t take up much space and aren’t a lot of work. We also have several fruit trees and a blackberry bush for seasonal treats.

Chickens, ducks or quail can provide meat and eggs and don’t require a huge area. Rabbits can be raised for meat and again don’t need a lot of space. Goats are better than cows for milk production. They can forage their own food most of the year. Sheep and pigs are other smaller options but tend to be more labor intensive in my opinion.

There are probably more food sources that you can forage locally than you realize. We can find nopales (cactus), tunas and pitayas (prickly pears), mesquite, verdolaga (purslane), mushrooms, and guayabas easily by just walking around our rural community. We can also trade for locally grown squash, tomatoes, corn, melons, and beans. We even have a neighbor who is an apiarist for fresh, organic honey.

Our area does not have any deer or turkey populations that can be hunted for food. However, there are squirrels, opossum, rabbits and pigeons which can be brought down with a slingshot and roasted over the fire. While these might not be your first choice in cuisine, it’s good to know there are options. We are also close to several large freshwater lakes, so fishing is yet another local food source for us.

During harvest season, stock up on the fruit and vegetables that are available. Because of the surplus, they are typically less expensive than other times of the year. Find a way to preserve these items either by canning, freezing or dehydrating.

Stock up on staples such as corn, beans, sugar, salt, and rice which can be stored in a dry, cool area for quite a long time. Can goods are another good way to stock up. Canned peaches, soups and other items can be bought and rotated out so they won’t reach their expiration date.

Hopefully, famine isn’t a disaster you ever experience living in Mexico, although it is an unfortunate possibility. Food shortages have happened before and will happen again. What better reason to take some time to prepare for it.

Filed under Homesteading, Safety and Security

Although in many areas, the gardening season is well underway, here in central Mexico, we planted in June and the corn is just knee high to a grasshopper (or maybe a little taller). Rainy season has been, well, wet and things are green and lush.

If you are like me, you are already looking forward to harvest and plotting how you might better improve your yield. Remember, we bought that lot and put up a wall this year, but didn’t get it finished in time for much planting. Between now and next growing season, my husband promises to have some raised beds for me to putter around in. WOOHOO!

So I’m delighted that the Gardening & Sustainable Living Bundle is up for a flash sale July 29 and 30. For these two day, you’ll be able to get 12 eBooks, 6 eCourses, 7 Printables and Workbooks for under $25. 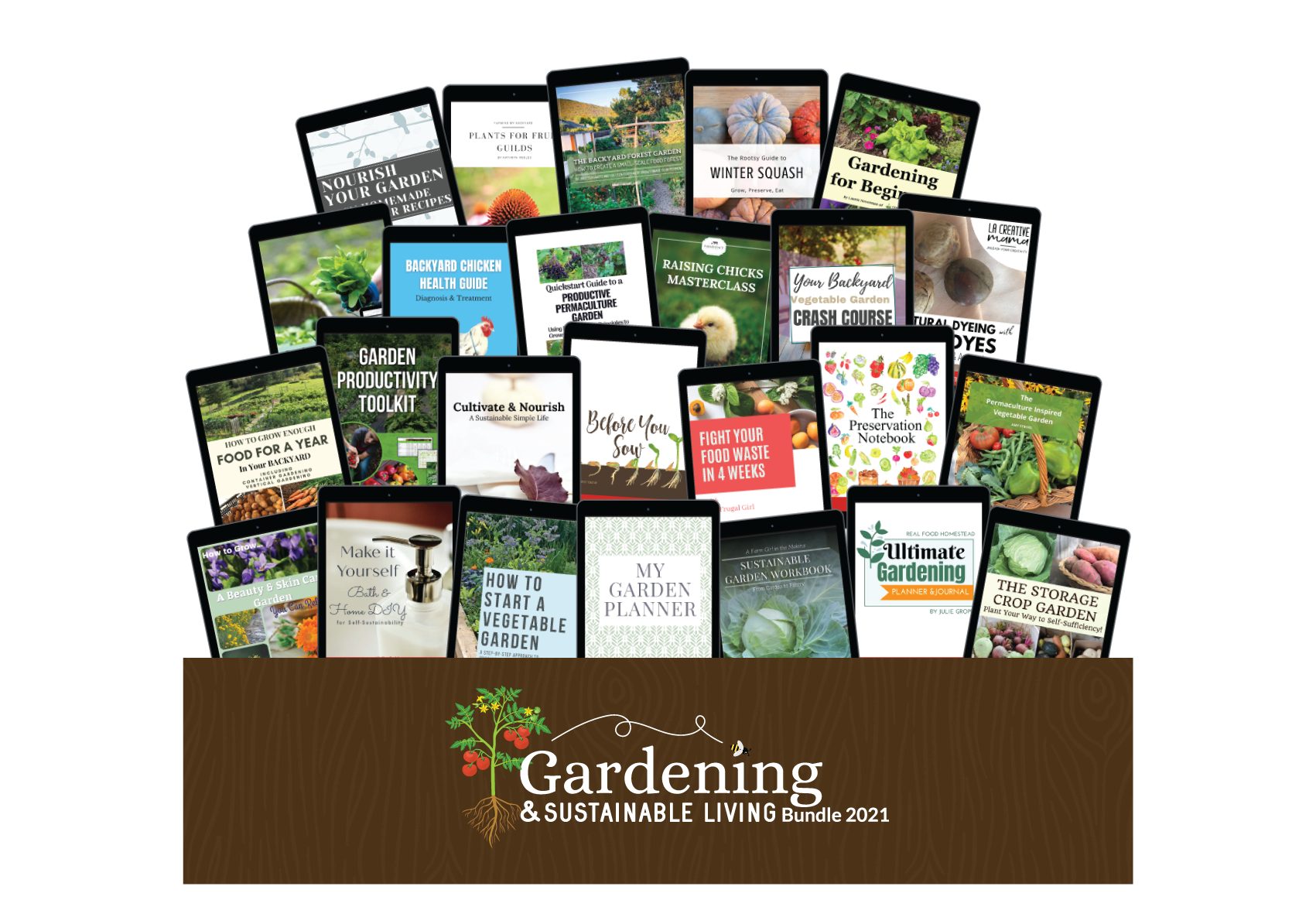 Looking at the breakdown of categories, there are 4 resources for getting started, 4 for planning, 8 devoted to growing food, and 9 resources on sustainability, which is the group I’m most interested in. The total value of this bundle is $582.80.

But wait, there’s more! If you purchase the Garden & Sustainable Living Bundle, you’ll have the opportunity to purchase the Herbs & Essential Oils Super Bundle too! AND that bundle includes my last herbal compilation Traditional Mexican Herbal Remedies, which is ONLY available through Ultimate Bundles. It includes 20 herbs, or rather 19 and miel sagrado (sacred Melipona honey) and their medicinal use by Mexican healers as well as scientific research on their effectiveness in treating a variety of ailments.

So if you’ve a hankering for gardening and herbs, this is the Ultimate Bundle combo for you! But remember, these are only available during the flash sale, so don’t dilly dally!

Learn More About These Two Bundles