No Quinceañera event would be complete without the party. Despite what you may imagine, it is a highly organized affair, well, at least until that last hour anyway. Remember, this tradition comes from formal presentation of a newly transitioned woman to society, dating back to 500 BC in Mesoamerica.

I was able to make short videos of the various activities at this Quinceañera, but the quality is not the best. I apologize for that. You’ll be able to see my gorgeous son though throughout! 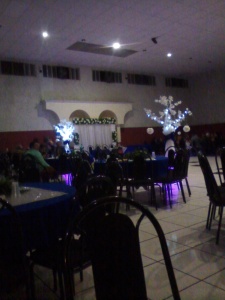 We arrived a bit earlier that the Quinceañera party. We wandered around a bit until we found tables that weren’t reserved. We were in the chambelan family section. Instead of sitting all at one table, however, each set of parents opted to have their own table for 8. Whatever! I did notice however that the resemblance each chambelan had to his father was marked and we could therefore easily identify the family of each.

Before too long, the Quinceañera and her escorts arrived and made their formal entrance. My son’s pants seemed to be the only one out of the four that were so tight.

After the formal entry, there was the Ceremony of the Change of Shoes. The Quinceañera’s shoes are replaced with high heels, symbolic of her change in position from child to woman.

After she had received her new shoes, the Quinceañera was crowned. She will always be a princess.

Following the chambelanes’ waltz, was the father-daughter dance. In this case, I thought the choice of Total Eclipse of the Heart an inappropriate song, but hey, I didn’t pick the music. The godfather also took a spin around the dance floor with his goddaughter, but I didn’t record that.

The dancing paused for more ceremony at his point. Next, there was the presentation of flowers. The Quinceañera received two bouquets of blue roses. Then she presented a rose to each and every person who was considered essential to the event, parents, godparents, damas, chambelanes. It took awhile, and several of those so honored were not present, but finally, it was over.
presentation of flowers

Following the flower bestowal was the Ceremony of the Last Doll. The Quinceañera was presented with a large doll dressed just like her as her final doll of childhood, based on a Maya tradition.

Also as a symbol of her new status, the Quinceañera was toasted with wine. At this party, only the godparents, parents and chambelanes received wine. The rest of us had to toast with soda.

Then followed the final waltz and exit of the Quinceañera and her escorts.

After a costume change, the Quinceañera, the chambelanes and the damas performed a modern dance sequence. The man of honor, the Quinceañera’s boyfriend, defended his lady love from the zombie like attentions of the unacceptable chambelanes. I didn’t think it was a fair fight. He whipped out a pistol and shot them at the end.

Finally, there was a solo dance by the Quinceañera. It was a bit hoochie-coo for a 15-year-old to perform in my opinion. But I’m not her mother.

Surprisingly enough, we were not served carnitas (pork) but fried chicken. It was ho-hum and certainly not worth the money I’d spent in costuming. After eating, there was a bit more dancing by the young adults.

As I sat there watching my son revel in the power of his youth and beauty, the music like a second heartbeat, I got a bit teary-eyed. How fast he had grown!

My son dressed for his kindergarten graduation ceremony.

My son dressed for his role as chambelan.

Part of my son’s duty as a chambelan (escort) was to attend the pre-party misa (mass). The church of choice in Moroleon is El Templo del Señor de Esquipulas. The church had been adorned with a few additional touches, like this white flowered lighted tree thingy. 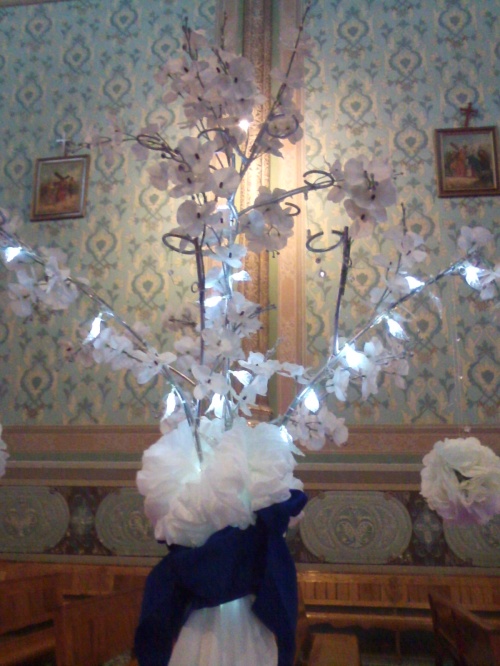 The ceremony began with the priest anointing everyone with holy water and a march down the aisle to stand before the altar. The Quinceañera had a special seat front and center while the court (chambelanes and damas) had seats to either side of her. Her parents and godparents were also up front.

I’m not Catholic, and although my husband is, he’s never attended this special Quinceañera mass, so wasn’t much help in explaining things. There was a sermon. The gist of it was that the Quinceañera was now an adult and able to make decisions as an adult, but as a woman of faith, those decisions should be in line with what the holy church dictates. The godparents passed a lit candle to her, representing their obligation of transmitting the flame of faith to the Quinceañera. The Quinceañera read from a red book that I assume is the particular holy book for such events. She promised her devotion and offered her heart to the faith.

There was some mention of La Virgin de Guadalupe, and I saw a bouquet of flowers in the Quinceañera’s colors of blue and silver at the foot of her altar.

There was some praying, some kneeling, some standing, some bell ringing and some sitting. I wasn’t able to understand it all with the acoustics in the church being what they were.

I did find the promises that the Quinceañera made above and some additional information on the mass procedure. (Misa de  Accion de gracias de Quinceañera, Quinceañera misa guia, Misa para celebrar los 15 años)

Then there was the call to partake communion. At this point, my husband’s latent Catholicism kicked in. He nearly jumped out of his seat with the comment that our son could not partake of the wafer. I just rolled my eyes. Our son certainly was astute enough to know that without being told.

The Quinceañera and her entourage marched back down the aisle, concluding the services. My husband and I took our leave. We headed to the centro (downtown) for some churros and cacahuates (peanuts) while the picture taking session took place.

About an hour later we headed to the party hall to continue the festivities.

My son was asked to be a replacement chambelan (escort) for a school friend’s Quinceañera (Sweet 15) party. Although he’s attended a Quinceañera before, this would be his first time actually participating in this traditional Mexican coming of age event.

Preparation began two months before the scheduled date. All members of the court (chambelanes, damas and the Quinceañera) had been taking dance lessons. As my son was a replacement, he began classes at a disadvantage. However, he was pleased to report after the first class that the dance instructor was highly impressed with his skills. Dance classes twice a week it was then.

The formal event required a suit. It was $450 pesos to rent, $650 pesos to buy. Not much of a difference really, but we went for the rental option on the basis that he was growing so fast that it wouldn’t fit in 6 months and it was silver, so not practical for other types of events. A week before the party, my son and the other guys went to the tailor to have their measurements taken. The suit was ready for pickup the day before the event. So we went and picked it up.

We peeked at it when we got home to discover that the jacket did not have the two front buttons. Hmm. A few frantic messages later, we were on our way back to the tailor’s for repair. Unfortunately, I didn’t have him try on the pants too. When he put them on, right before the event, he could hardly move. They had been cut too small. Well, there wasn’t any time for any more alternations.

Then there was the outfit for the modern dance section. The morning of the event, he was informed that he needed to wear jeans, a gray t-shirt, black shoes, a leather jacket, and sunglasses. Fortunately, he had all but the last two. I had just bought him a nice modern black jacket and could not understand why that wouldn’t be good enough. I certainly didn’t have the money for a leather jacket. He also didn’t have any sunglasses. So we headed to the market until we found a sunglass vendor. $70 pesos. We also found a vinyl jacket for $375 pesos. The total for this honor was racking up left and right!

He needed to be at the girl’s house at 5:00, so we all dashed about getting ready. We hopped into the truck. My son handed me his sunglasses, and they broke. ARGH! After we dropped him off, we headed to the mall to pick up some super glue. $11 pesos. We went to have our parking validated. In order to validate the parking ticket, we needed to spend a minimum of $50 pesos. I marched back to the store and bought a jar of peanut butter. $55 pesos. My husband repaired the glasses in the truck, and we headed to the church for the pre-party misa (mass).