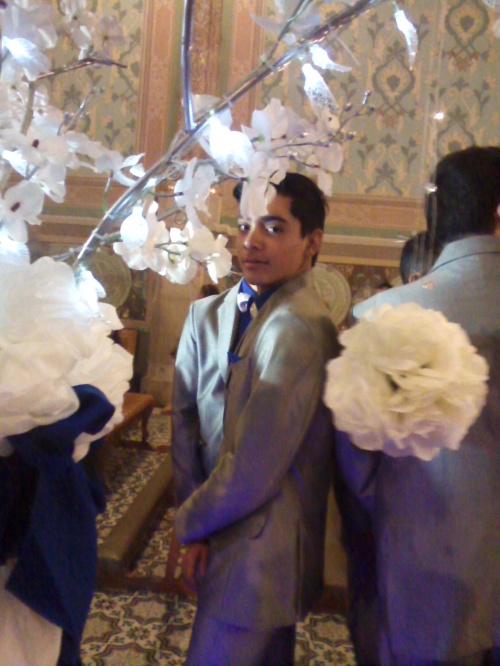 My son was asked to be a replacement chambelan (escort) for a school friend’s Quinceañera (Sweet 15) party. Although he’s attended a Quinceañera before, this would be his first time actually participating in this traditional Mexican coming of age event.

Preparation began two months before the scheduled date. All members of the court (chambelanes, damas and the Quinceañera) had been taking dance lessons. As my son was a replacement, he began classes at a disadvantage. However, he was pleased to report after the first class that the dance instructor was highly impressed with his skills. Dance classes twice a week it was then.

The formal event required a suit. It was $450 pesos to rent, $650 pesos to buy. Not much of a difference really, but we went for the rental option on the basis that he was growing so fast that it wouldn’t fit in 6 months and it was silver, so not practical for other types of events. A week before the party, my son and the other guys went to the tailor to have their measurements taken. The suit was ready for pickup the day before the event. So we went and picked it up.

We peeked at it when we got home to discover that the jacket did not have the two front buttons. Hmm. A few frantic messages later, we were on our way back to the tailor’s for repair. Unfortunately, I didn’t have him try on the pants too. When he put them on, right before the event, he could hardly move. They had been cut too small. Well, there wasn’t any time for any more alternations.

Then there was the outfit for the modern dance section. The morning of the event, he was informed that he needed to wear jeans, a gray t-shirt, black shoes, a leather jacket, and sunglasses. Fortunately, he had all but the last two. I had just bought him a nice modern black jacket and could not understand why that wouldn’t be good enough. I certainly didn’t have the money for a leather jacket. He also didn’t have any sunglasses. So we headed to the market until we found a sunglass vendor. $70 pesos. We also found a vinyl jacket for $375 pesos. The total for this honor was racking up left and right!

He needed to be at the girl’s house at 5:00, so we all dashed about getting ready. We hopped into the truck. My son handed me his sunglasses, and they broke. ARGH! After we dropped him off, we headed to the mall to pick up some super glue. $11 pesos. We went to have our parking validated. In order to validate the parking ticket, we needed to spend a minimum of $50 pesos. I marched back to the store and bought a jar of peanut butter. $55 pesos. My husband repaired the glasses in the truck, and we headed to the church for the pre-party misa (mass).