It’s important to remember that Maria didn’t live in the time of Walmart. Everything was hand-made by the women of her community. Was Maria particularly talented in textiles? Was she an excellent baker? Did she have other creative skills?  Why were these things never mentioned by those dratted bible writers?

Today’s Modern Day Maria, Lynne, meets the arts and crafts aspect of a virtuous woman as described in Proverbs. “She selects wool and flax and works with eager hands. She makes coverings for her bed; she is clothed in fine linen and purple. She makes linen garments and sells them and supplies the merchants with sashes.(Proverbs 31:13,22,24) 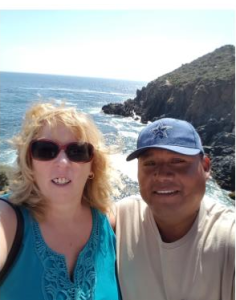 My name is Lynne and originally from the Oregon and Washington areas but now live just north of Ensenada, Baja California. We are fairly new to living in Mexico as it has only been 15 months. My husband and I met in Oregon and were dating other people but became good friends then later ended up together. We have been together for almost 19 years and married for 18. What is funny is his older sister’s children and mine were friends, such a small world sometimes.

My spouse was not legal and it had gotten to the point he was like in jail in our own home, no more driver’s license, only able to do odd jobs but took care of the house and yard. We were in limbo with the attorney as it took 3 years just to get data/information on my husband and decided life is too short to wait for possibly years with no guarantees for him to be able to get his papers and who knows how much money for not having a sure thing. Played with the numbers and determined we could sell the house and basically retire or semi-retire in Mexico, this would allow my husband the freedom to do as he wants without worries of immigration so we made the decision to move. I knew the final decision came down to me to actually move here but I was ready for us to move on to another phase in our lives even though he would end up having a lifetime ban from the US.

It has been a big change for us but not just from moving to Mexico as much as us being together all the time since I’m now retired or semi-retired (not sure which yet). Sometimes when things are not going just right, he will mention I was the one who wanted to come here but he is happy we did come. We care for each other very much but we both have our days. For my spouse, the change has given him freedom and for me, it has been a transition of working in a more stressful type environment for many years to not working. I’m looking forward to getting into my artsy/craftsy phase of life. 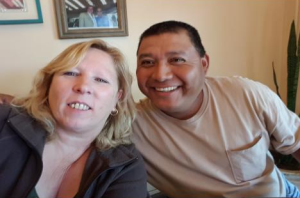 As to family and friends even though we don’t physically see each other very often I feel we make the effort to connect through Messenger or Hangouts via phone and video. We have set dates and times to video with the grandchildren along with talking to the kids, relatives and friends. When we do physically see people it is more quality time. I consider our move no different than if we had moved across the country. I would say if anyone, my mother has been the most difficult over the move. She constantly was making negative comments but over time this has stopped. I think some of it has to do with her seeing us on Facebook everything is going fine. I would say the hardest thing for both of us has been the family (kids and grandkids) not being physically around us especially my husband as we had part of the grandchildren almost weekly in the US, I can go visit while he can’t. We hope to finish getting through the passport process for my husband and see about a visitor’s visa to vacation in Canada so it will be easier for our immediate family to get together.

My spouse’s family are not located near here but have always gotten along with his siblings and children in the US. I have never met his mother or siblings in Mexico. He plans to see his mother for the first time in more than 25 years and the place he was raised this coming year. I’m not comfortable going since it is Guerrero which has had a lot of issues and he hasn’t been there in so many years to understand how it may have changed. 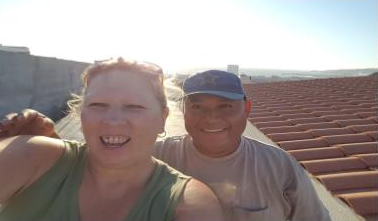 From the soon to be rooftop patio 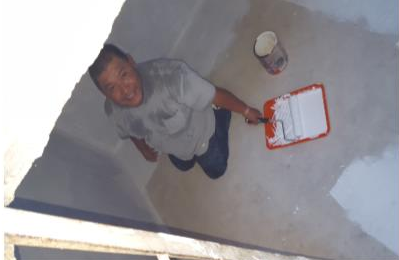 Sealing the inside of the pila

We were fortunate to sell our house in the US and buy/build our home. We are not sure what is next, I may do some part-time consulting in the field I was in – Geographical Information Systems (GIS) or sell some of the Arts & Crafts I enjoy creating. My husband is thinking of working independently as a plumber or handyman. We may look at some other options but are not rushing into anything. Whatever we decide this will supplement what we already are receiving.

The focus for the last year has been on the house but that is finally getting to the point we can start doing other things. We are craftsy people and enjoy little projects. Would like to see Baja and mainland MX over time, maybe do some house/pet sitting. I want to become involved in our community but not sure what at this time, up till now we have just contributed to different groups. I love the idea of contributing time to a group south of here that builds small homes for very poor families up in the hills.

For us, this is our next phase in our life together….

This is so worth it…