My son and his group of galanes (young men).

My son was recently invited to his first quinceañera party. What a milestone! While my son was not a chambelan (one of the male escorts) at this particular event, I’m sure that it won’t be long before he is requested to act as one.

His invitation spawned a flurry of activity on my part. I had no idea what he should wear and the uncertainty of whether he should bring a gift or not. So I went asking about. Since he was not a chambelan, he wouldn’t need a formal suit. However, church clothes would be appropriate. Well, he had grown out of his dress pants, so off to the store we went. We had to shop in the men’s section! Where did my little boy go? A pair of sensible black pants were purchased. Then he needed a shirt. After several options had been discarded, he picked the black shirt with striped sleeves. I think it was a good buy because he’ll be able to change it up a bit for future quinceañera parties (wear a vest, tie, open over another shirt, etc.Spanish young). His school shoes and socks were just fine–but he did need a belt. So we spent about 500 pesos on his outfit alone. Then there was the gift, a simple necklace, and the gift bag–so another 100 pesos or so. 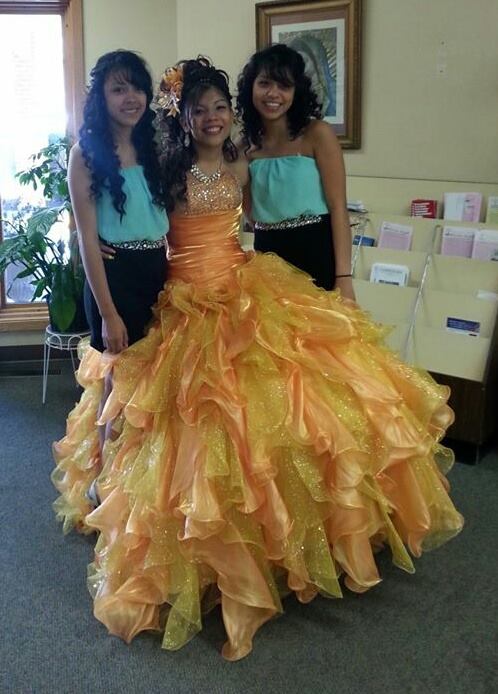 My beautiful niece in her quinceañera dress.

Traditionally, the quinceañera festival was a coming oyoung Spanish ladies. This custom was brought over to Mexico after the conquest and remains an integral part of a Mexican girl’s life. The traditional quinceañera gathering would have been the first time she was presented formally to the community as a woman, not a child. Her chambelanes (escorts) would have been eligible young men of her social class from which she would choose from and marry within the year, more often than not. While it’s less common these days for girls to marry before they turn 16, brides of 17 or 18 are fairly common, especially in the more rural areas.

I’ve had the honor of attending a quinceañera here in Mexico and was amazed at the ritualization of the event. Of course, I attended with my mother-in-law and that made the event even more memorable as you will see.

The day of the quinceañera, there is a formal mass in the big church downtown. I’ve been in several houses where a wall-sized picture of the quinceañera before the altar is displayed. It’s quite a thing to behold. After the mass (and subsequent picture taking session) there is a social event usually hosted in a rented salon (hall). The wealthier the family, the more lavish the event.

The guests are invited to arrive before the quinceañera so that she and her “court” can make a grand entrance. The first dance after the entrance is between the quinceañera and her father. Much like a wedding reception, there is symbolic of the passing of custody from father to the new “man” in her life as the father passes his daughter to her escort for the second dance. Following the escort dance, there are several other choreographed dances, performed by the belle of the ball and her court, before the floor is opened up to the general public. I was a bit surprised that the main song was  Total Eclipse of the Heart. I wasn’t expecting an English theme song for such a traditional event, much less this particular one, which seemed to me inappropriate for the innocence of a young girl’s coming out party (although it happens to be one of my favorite songs ever). But whatever floats your boat I suppose.

While these dances are being performed, the invitees are being served food. The standard fare in our area is carnitas (fried pork) which is not one of my favorites. At the quinceañera that I attended, my mother-in-law asked for several plates to go. Then she had another waiter bring her plates for now. Before too long, she had a pile of food in front of her stacked nearly nose high. She was ready to leave before the dances were even finished, and she asked for a two-liter bottle of soda to go. Then, of course, she needed a bag for all her foodstuff.

I was pretty embarrassed by this point. I come from an area where the leftover food is left to the host, not divvied up in doggie bags among the guests. Oh, but it didn’t stop there. She snatched up the tortilla basket, napkin and all–AND the decorative centerpiece from the table. I guess my surprise (or horror) showed on my face because she told me matter-of-factly that the hostess told her she could have one of the decorations. I imagine the hostess meant after the party was over though. Then my mother-in-law asked if I wanted one, thinking maybe I was jealous. No thank you.

This seems to be a fairly common practice, as ill-mannered as it seemed to me. As we were leaving the party, I overheard several older ladies debating which adorno (decoration) they were going to take when they left. My sister-in-law L. also has a number of centerpieces she took as momentos of various quinceañera and wedding receptions littered about her house. As she doesn’t have any tables, they sit on the floor in the corners of various rooms, gathering dust.

I refused to help my mother-in-law with her stolen goods and walked on ahead of her in some attempt to distance myself from her and her ill-gotten gains. I declined additional invitations she extended to accompany her to other events (well except for that party crashing Christmas posadas in December) after this.

My son had a far better time. He told me it was medium-fun. The music was loud. He danced with a girl. He received two compliments on his outfit (from girls) and was served a quarter glass of margarita, although the other boys were not. He thinks it’s because he has a mustache and the waiter thought him older than 13, which is probably true. They had tacos and were pretty good.

We picked him up at 11 pm, which was early for this type of event, but I reminded him he is only 13 and there is no reason he needed to be out later than that. I’m sure this is just the first of many such events in my son’s life!

Tagged as being a teenager in Mexico, coming of age party in Mexico, quinceañera, social events in Mexico, sweet fifteen party

7 responses to “Attending a quinceañera”