The Return of the Zombies

To add to the desolate wasteland landscape currently found in La Yacata because of the scorched earth from clearing burns, someone dumped a dead donkey near the house. Being curious, my husband decided to check it out.  According to his forensic examination, the donkey showed signs of having been hit by a car. While he’s not positive, he thinks it might have been the same donkey that was plowing the area where we sometimes sharecrop. His report included the fact that the guys plowing got progressively drunker during the course of the day while plowing so it wouldn’t have been too hard for an improperly tied donkey to wander out into the road.

I’ve already mentioned that the road past La Yacata has become quite deadly.  It’s almost as if there is a game of points going on–10 points for the old guy on his bicycle, 20 for the guy on the donkey, 15 points for loose livestock, etc. Since my last update, there have been 3 more fatalities (not including this donkey).  One guy, heading to La Yacata to work with the borrega guy, was hit by a truck and dismembered. The guy driving the truck tried to bribe his way out of being held accountable, but the witnesses wouldn’t let him go until the police arrived and arrested him. Doesn’t change the fact that a man is dead though.

Anyway, back to the dead donkey.  It wasn’t there 12 hours before large wild dogs and coyotes found the carcass.  Every night, the two factions snarled and barked and yipped over their meal. Puppy was terrified.  Nary a sound did he make in response, which isn’t like him at all. Even on our daily walks, he didn’t linger but stayed right next to me, especially as we passed the inflated corpse.

Sure enough, all this commotion attracted the attention of zombies. Segue creepy music….The zombie babies have returned. Remember how the three zombie babies were sent to live with the neighbor who had a cow that could provide them with milk since our goats and sheep weren’t able to keep up with their voracious appetites?  Well, the neighbor decided it was high time they started foraging for themselves and brought them to the barn that borders our property. My husband saw them and negotiated for one of the zombie girls. She came back to live with us during some video filming and caused me some anxious moments. Puppy wasn’t happy at all.  It seems that zombie girl thinks she’s a pet and just won’t stay in the animal area. Twice now, she’s tried to eat Puppy’s food and he’s bitten her nose. My husband was furious but I pointed out that it was only natural that Puppy would defend his food dish from zombie invasion. 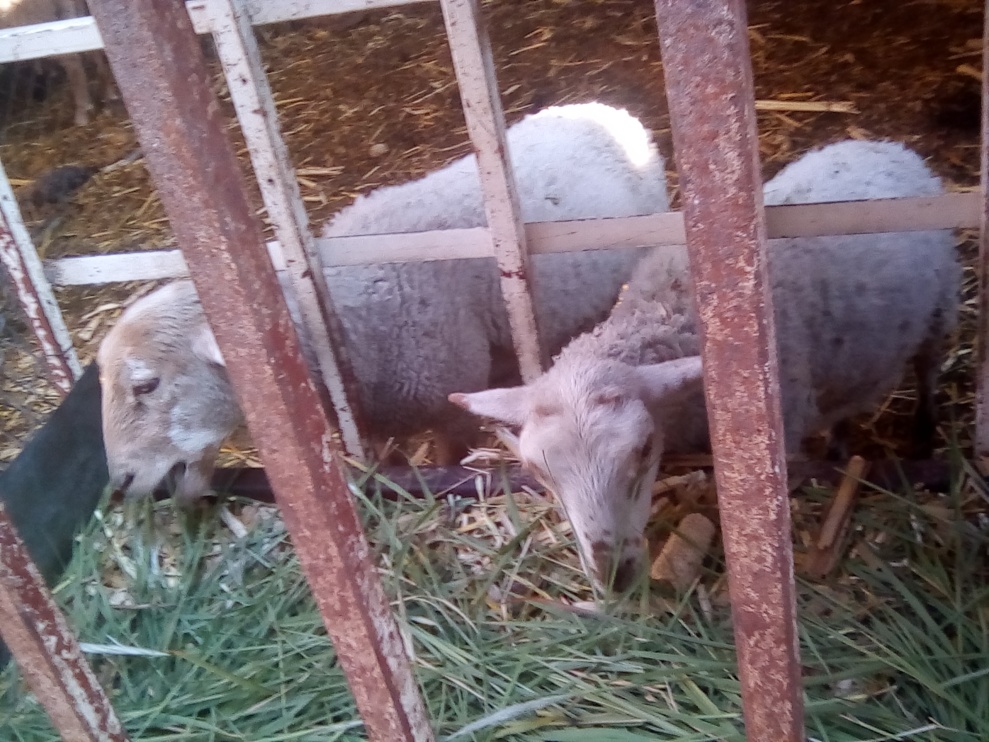 A bit bigger, much healthier, but still UGLY!

The next to return was zombie boy.  He and Oreo bump heads for the honor of being head sheep boy, but I’m pretty sure Oreo is going to come out on top in the end.  The third of the zombie trio didn’t return, but I’m fine with just two zombies. 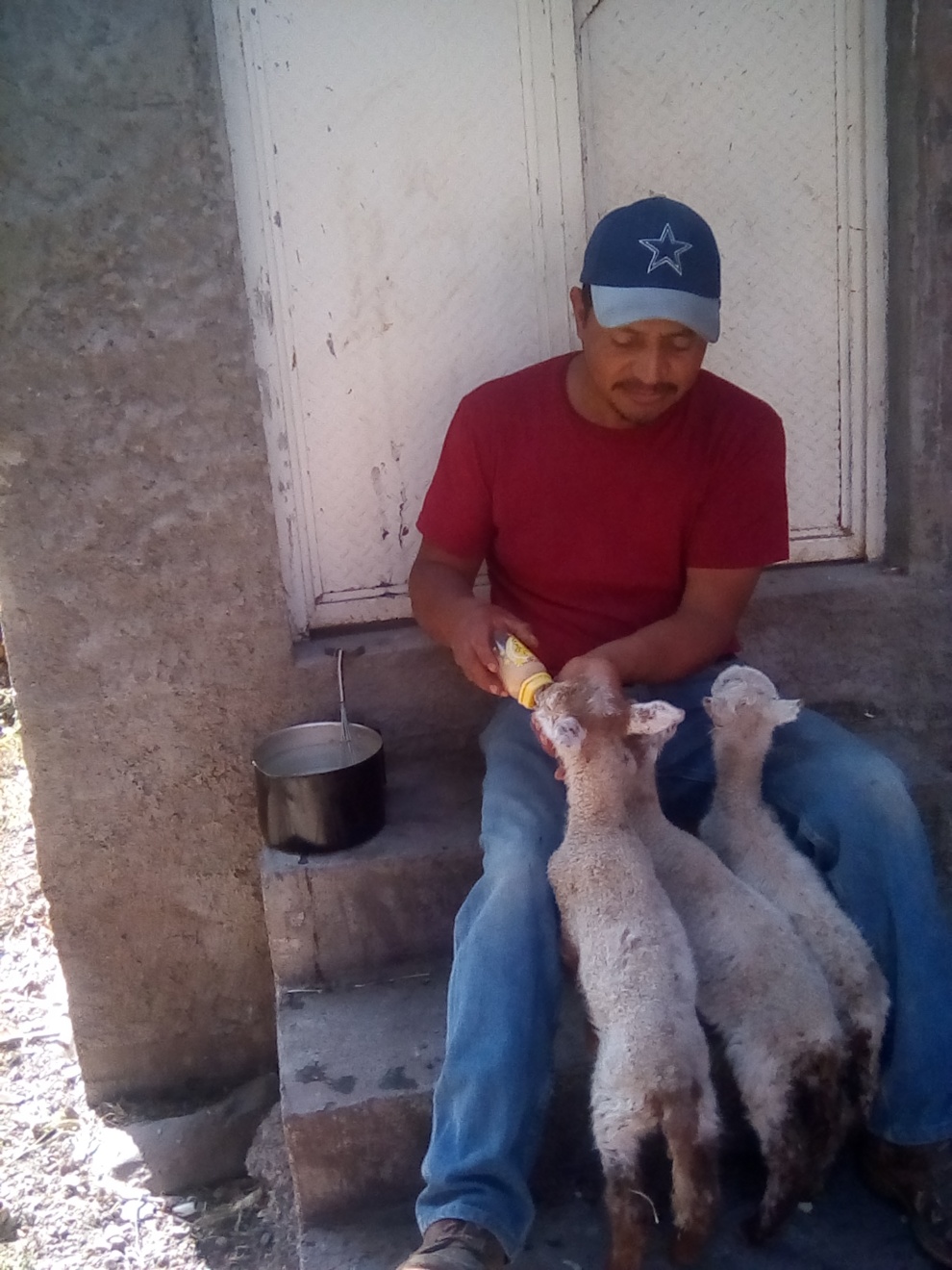 So the triplets made it through the first few days of life, which is saying something about the superhuman efforts Papa Chivo put into them. Bottle feeding didn’t seem to give them enough nutrients, so my husband borrowed a wet-nurse goat.  Unfortunately, the zombies had voracious appetites and the wet-nurse goat could not keep up with the demand.

Big Mama was forced to supplement a bit but didn’t have so much milk since Fuzzy was quite a big girl.  Our 3 goats were pregnant but not lactating.  Caramela the sheep was also pregnant but she’s been pregnant since we bought her.  I wonder if she’ll ever give birth.

Drastic times call for drastic measures. In hopes of getting more milk, my husband traded Cottonball, the zombies’ mother, and Baby’s Mama for this big brown ball of fur which promptly spewed out Oreo and Cookie, the lastest sheep to grace our pastures.  Although delighted with these little black boys, the arrival of twins didn’t help the zombie feeding situation.

Skunkette next to Skunk, the macho sheep, and in from of Mary with fleece not quite as white as snow. Brown Mama is lying down with Cookie in the back.

Then in the blink of an eye, my husband traded the zombie babies for this striped skunk sheep.  The zombies went to live with a guy with grandkids to bottle feed them and a milk cow to provide milk.  So it seems we have again averted the apocalypse in La Yacata.

So my husband got it in his head that borregos (sheep) are more profitable than goats.  It is true that borregos sold by the kilo are more expensive BUT they are a smaller animal, so overall there are fewer kilos to be had.  Disregarding my logic, he went ahead and traded our macho goat for a young borrega and her borregita.

I continued my naysaying despite the now physical presence of more borregos.  Borregos carry on something awful whether or not they are hungry. (See Separating the Sheep from the Goats They are more delicate healthwise.  (See Birth and Death)  They need more care than goats.  They don’t eat as varied a diet as goats so food during the dry season will be harder to find.  All to no avail.

The young borrega managed to come down with a BAD case of chorro (diarrhea) probably from the change of diet from her previous home to ours.  This affected little borregita because the mama’s milk all but dried up during her illness.  So three days after purchase, it was looking like borregita wasn’t going to make it.  She was listless.  She became weaker and weaker until she could no longer stand.  It was pitiful.  My husband debated whether it would be kinder to just kill her.

I objected.  Surely there was another option.  We’ve had orphaned babies before on our mini-rancho.  I convinced him to try and nurse her back to health.  We bought a bottle and some milk, mixed with suero (electrolytes) to feed her.

The difference was marked almost immediately.  The second day of bottle feeding she could lift her head and bleated to let my husband (now named Papa Chivo–yes she’s a borrego but Papa Borrego doesn’t roll off the tongue as well) she was ready for more milk. 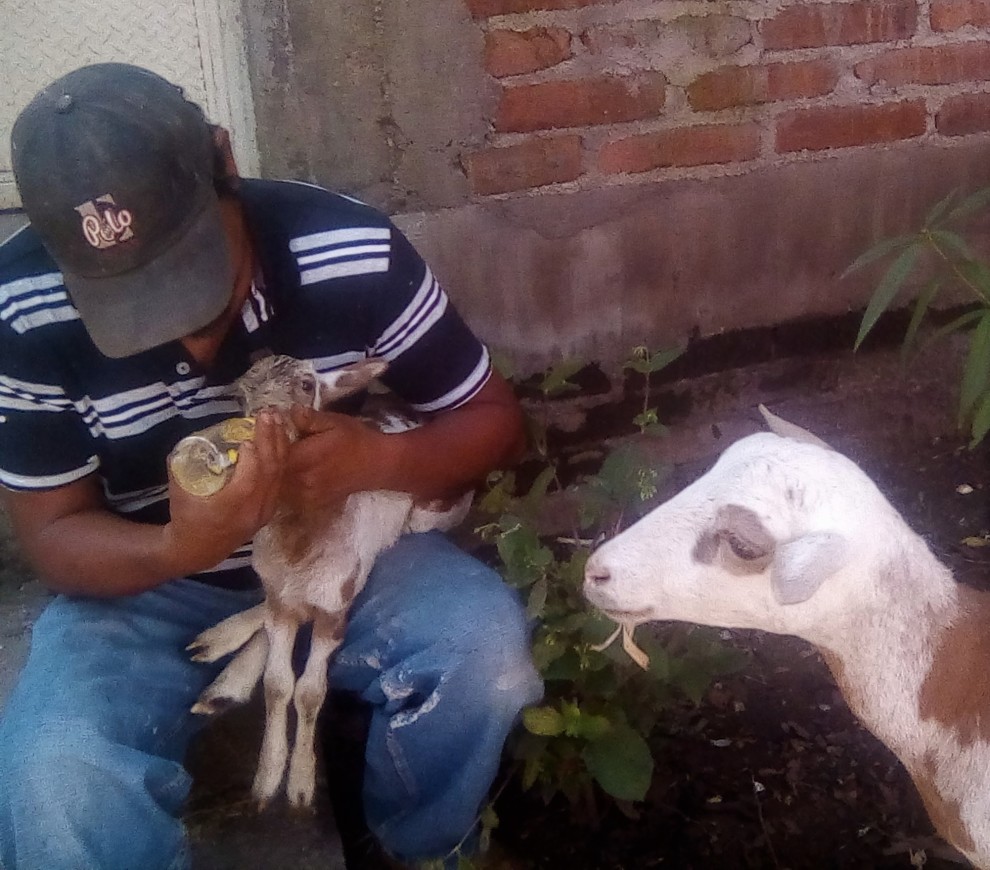 My husband and son alternated bottle feedings and the borreguita was christened Baby so that when she hollered in the middle of the night I could shake my husband awake and say “Go feed Baby.”  After about a week of milk, she started to show an interest in the paca (alfalfa bales).  So feedings were supplemented with a bit of alfalfa and some ground maiz sorgo mixed with milk like a cereal.

It took about a week for her to try and stand but as soon as she could wobble about she demanded to be taken out with the rest of the herd.  She couldn’t keep up, so my husband had to carry her.  She was content as could be munching on the grass she could reach while resting and watching the gang graze.  Mama borrega was happy as well.  She was a nervous Nelly when she had to leave Baby behind.  Maybe that’s what we’ll call her–Nelly.

We had every hope that Baby would make a full recovery.  However, one morning she was again laying on the ground bleating piteously.  She didn’t suffer long.  She died just a few hours later. 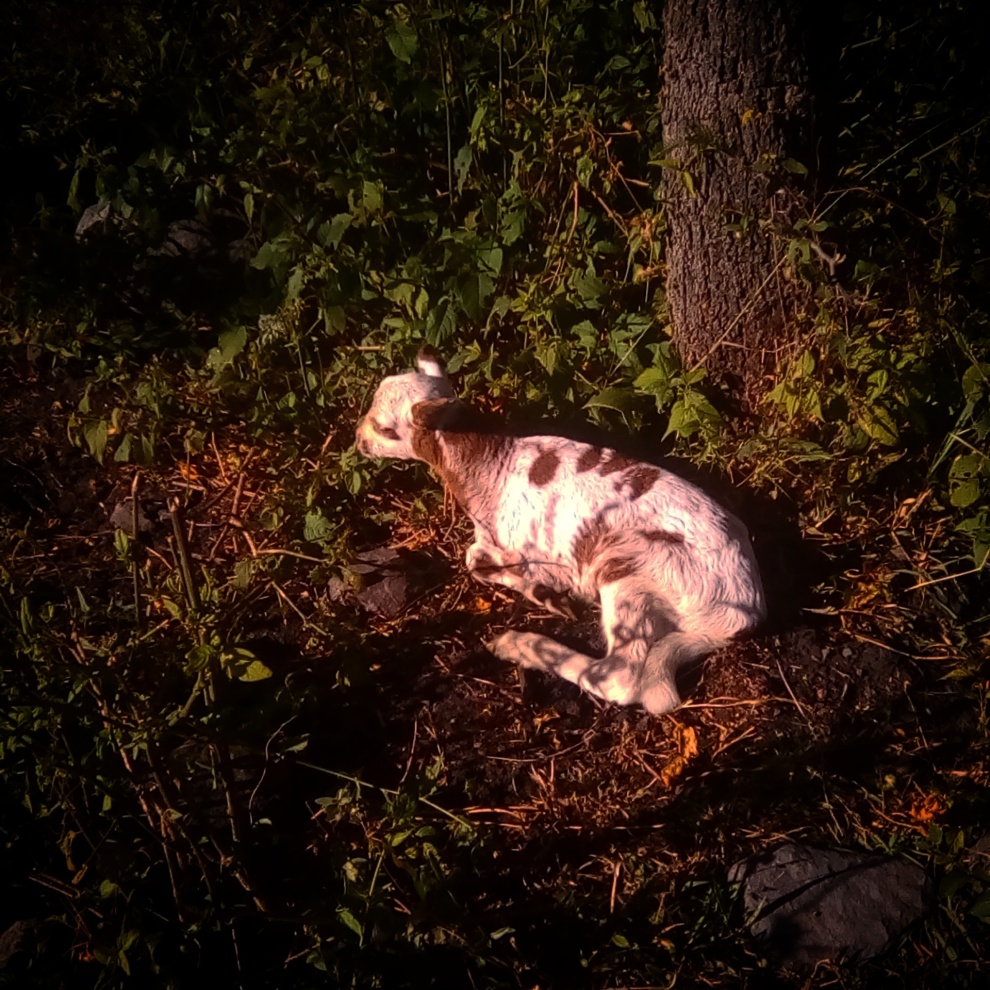