My son has had a dry cough most of the month of January. His aunt recommended an infusion made from gordolobo, ajo (garlic), limón (lime), canela (cinnamon) and sweetened with honey. Before I had him drink this concoction, I thought I’d investigate a little more about gordolobo.

According to my little Aztec medicine book, gordolobo (which translates to English as fat wolf) has the botanical name of verbascum thapsiforme sdahere and other common names of vervasco, Cirio de Nuestra Señora, and Flor de Gran Candelero. Gordolobo is often translated as common mullein which is Verbascum thapsus. However, based on the botanical names, it seems that gordolobo is a type of mullein but not common mullein, so the translation is not correct.

I went to this handy site called The Plant List for some verification. There I found that most likely verbascum thapsiforme sdahere is another name for Verbascum densiflorum Bertol, dense-flowered mullein. I can’t verify this is the same plant entirely because gordolobo is only sold dried at the market and I’ve never seen a flowering plant to compare it to photos of the dense-flowered mullein. Nor could The Plant List. It gave itself a rating of 2 out of 3 on identification confidence.

The Verbascum or mullein family has 360 species in it and it seems safe to say that gordolobo is a subspecies within that plant family. One study found that there wasn’t much variation between species when their compounds were compared. Therefore, it’s probable that many of the medicinal uses of common mullein will be true for the verbascum thapsiforme sdahere plant sold at the Mexican market.

Gordolobo has been used by the indigenous people of Mexico for centuries, long before the Spanish arrived. Besides being used for cough, sore throat, and respiratory issues, it is often used as a treatment for hemorrhoids and varicose veins.

Mullein contains triterpene saponins, volatile oil, mucilage, flavonoids and bitter glycosides. It’s been approved by the German Commission for the treatment of respiratory catarrh. It has anti-inflammatory properties and mullein tea, made from the flowers and leaves, has been shown to be beneficial for sore throats, hoarseness, bronchitis, tonsillitis and dry cough.

The flowers have sedative and bactericidal properties. Flower extracts have been shown to be effective when used as treatment against E-coli, Staphylococcus aureus, Staphylococcus epidermidis and Klebsiella pneumoniae.

Some of the remedies I found in my Antigua Recetario Medicinal Azteca were:

For croup, gordolobo infusion is used as a gargle.

For colds, make a tea from the flowers and leaves of three branches plus the branch of 1 malva (mallow) boiled in ¾ liters of water. This quantity makes three cups.

Essential oil made from gordolobo is recommended for angina pain. It should be taken three times a day before meals.

If gordolobo is used as an intestinal cleanse, fresh leaves should be boiled in milk rather than water.

The leaves can be applied as a poultice for burns, hemorrhoids and varicose veins. Five grams of gordolobo should be boiled in ¼ liter of water when making the poultice.

Another tea remedy for cough, lung infections, sore throat and bronchitis calls for two tablespoons of dried gordolobo in two cups of water boiled for five minutes. Cover and steep for five more minutes. The infusion is a yellow color, which isn’t surprising since the flowers are yellow. It doesn’t have any taste nor scent to speak of.

Gordolobo is a soft, wooly plant. It has been known to cause dermatitis when handled regularly.

Although gordolobo is the term most commonly used for mullein, in Mexico this name is also used for several other varieties of plants including Greater Burdock (Arctium lappa), Plume Poppy (Bocconia frutescens), Tapered Cudweed (Gnaphalium attenuatum), Pseudognaphalium chartaceum, and Coltsfoot (Tussilago). Be sure you identify the plant being sold to you before using it as a medicine.

Since my husband had also developed a dry cough, I mixed up a batch of the Garlic tea cold buster (garlic, lime and honey) and added some gordolobo to the mix. They both seemed to sleep better that night.

I’ve already mentioned that the bugambilia morada  (Bougainvillea glabra) can be used medicinally along with eucalyptus and aloe vera for cough treatment. Most often an infusion is used to treat asthma, bronchitis, whooping cough, and other respiratory conditions.

This lovely, bright plant, known as camelina in some parts of Mexico, has several other traditional uses as well. It has been used to treat dysentery, stomach pain, and skin blemishes.

Bougainvillea glabra is also known as the lesser bougainvillea or paperflower. The plant that appears to be full of purplish flowers actually has very small white or yellow flowers which are surrounded by colorful papery bracts. The video above shows a close-up of the actual flower.  The flowers of Bougainvillea glabra are used to treat low blood pressure in Panama.

The Bougainvillea glabra has anti-nociceptive and anti-inflammatory properties. The leaves are effective in preventing dopamine-depleted neurological disorders like Parkinson’s disease because of their antioxidant composition. The antioxidant component also has potential in the treatment of cancer.

In addition, studies have shown that other varieties of the Bougainvillea species, mostly the Bougainvillea spectabilis, have antimicrobial, antidiabetic, antifertility, antihyperlipidemic, anti-atherogenic, antipyretic, anthelmintic, amylase inhibitors, thrombolytic, and analgesic properties, leading to the suggestion that the bougainvillea glabra be studied further in the future. 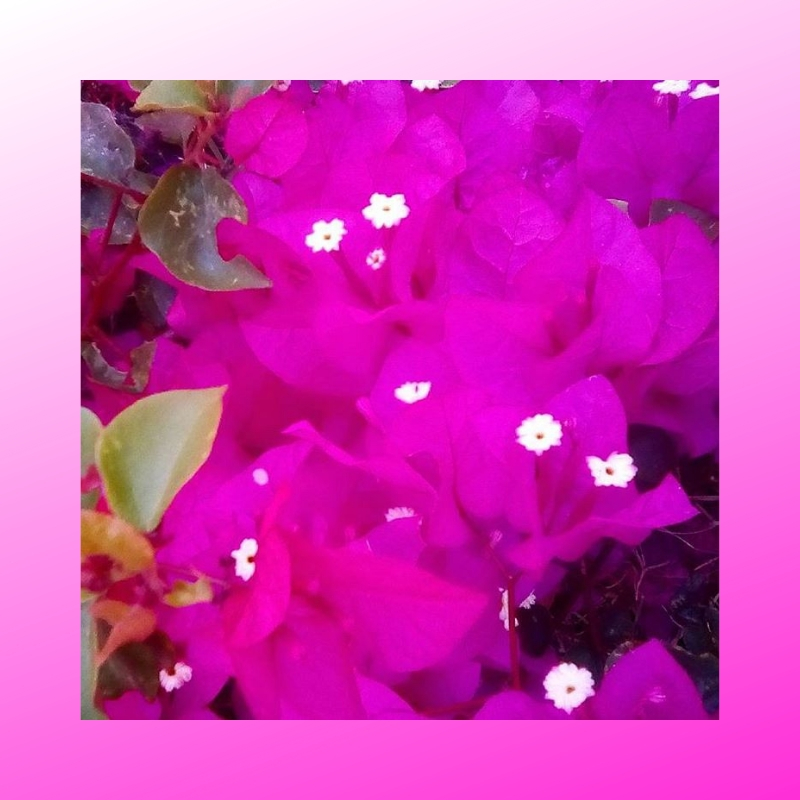 I’ve found a few recipes that use bugambilia for cough remedies.

Boil in one quart of water, reduce to simmer, then strain the herbs out.  Add limón and miel (honey) to taste. Sip as needed throughout the day.

Boil the herbs together, strain, drink hot or cold with cinnamon for flavoring.

Unfortunately, I haven’t been able to locate gordolobo in my area. I’m going to check with the herb seller at the tianguis in Uriangato next time I go. He’s got rattlesnake skin and armadillos shell, so the odds are in my favor he’ll have some.

I did prepare the simple infusion tea with just the bugambilia, however. It has a mild taste and a bright pink color. 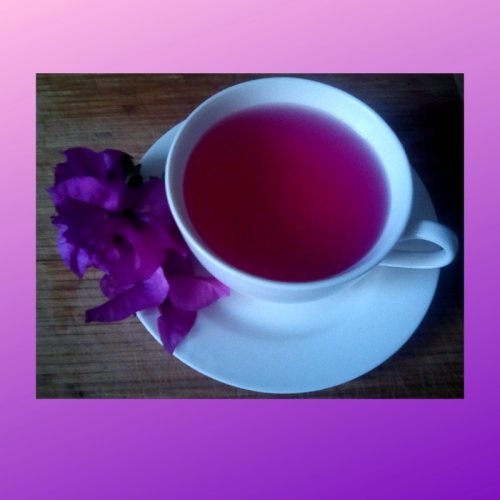