Since someone has decided to turn La Yacata into a post-apocalyptic wasteland by burning every single lot whether or not the owners gave permission, food for our herd/flock has been harder to find.  The goats are getting by because they eat quite a variety of plant stuff and are agile in their foraging abilities. The sheep, on the other hand, are finding good eats more difficult.

As rainy season doesn’t begin for another few months, my husband decided that some of the sheep needed to go in order to buy some food for the rest.  He went back and forth which should be sold, not really wanting to part with any of them. Finally, he decided the two newest additions would be sacrificed for the greater good.  Neither had names yet so we hadn’t gotten too attached.

The neighbor, who I call Best Buddy because he wants to do everything my husband does, also decided he was going to sell some sheep to buy some feed.  He wanted to sell 4.  So since my husband wanted to take them to Puruándiro, Michoacan to sell, he needed to get a “guia”, which is a permit for transporting animals.  He picked it up at the same place he registered the animals in January, the Asociacion Ganadera Local in Moroleon.  It cost 25 pesos. 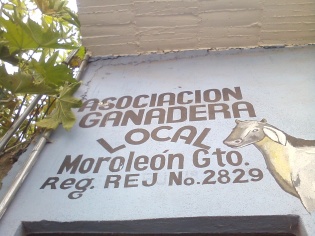 Since Best Buddy couldn’t leave any earlier than 8 am, I had plenty of time to take my walk with Puppy and feed the cats.  Then we were off.

Just as we passed La Calera, a truck with some goats pulled alongside us and motioned for us to pull over.  Curious, we did. They wanted to know if we were off to sell the animals in Puruándiro. We were. They offered to buy them for 33 pesos a kilo right then and save us the trip. Best Buddy wasn’t too happy with the price.  He had been told that in Puruándiro he could get 36 pesos per kilo. I signaled to my husband that we should take the deal.  After all, we weren’t experienced in the whole buying and selling done in Puruándiro and odds were we’d actually get a smaller price without knowing the ins and outs of it all.

Finally, my husband suggested we go and weigh the animals in Cerano, the next town, and then decide.  There is a bascula (weighing machine) there. This bascula is the type you drive upon with the animals and get weighed.  Then you take the animals off and weigh the vehicle again. The difference is the weight of the animals. So we pulled in there and said hi to my husband’s cousin who runs it. However, Best Buddy wanted the animals to be weighed separately since they had two owners.

No problem.  We followed them into town and stopped next to a telephone post.  The guys pulled out a scale and hung the animals from it, one by one. One sheep weighted 52 kilos and the other was 20 kilos. 72 kilos at 33 pesos a kilo was enough to buy food that should last until the rainy season starts.  Interestingly enough,  macho sheep are sold for 40 pesos per kilo, 7 pesos more than females. Since we have more machos than we need at the moment, this little tidbit will be useful in the future.

With the prices agreed upon and the animals loaded into the other guys’ truck, we followed them up the road to the bank so they could make a withdrawal.  Of course, there was the chance that the truck would take off with the animals and we’d be left whistling Dixie, but that didn’t happen. It turns out that the guys were from Cerano and knew my husband’s family.  I have no doubt that they took their new acquisitions to Puruándiro and sold them for 36 pesos per kilo.

Since cash runs like water through my husband’s fingers, we went in search of pacas (bales) of alfalfa immediately. We drove towards Yuriria and came across some pacas in lines waiting for transport.  We stopped and my husband hopped out to ask the guy if they were for sale. He wasn’t in charge, but the owner was just up the road on the tractor. So that’s where we went. After some negotiation, the owner agreed to 100 pesos per paca (bale). For comparison, most pacas in Moroleon are running 120 pesos right now and increase the further into the dry season it is.  My husband and Best Buddy loaded the truck up. 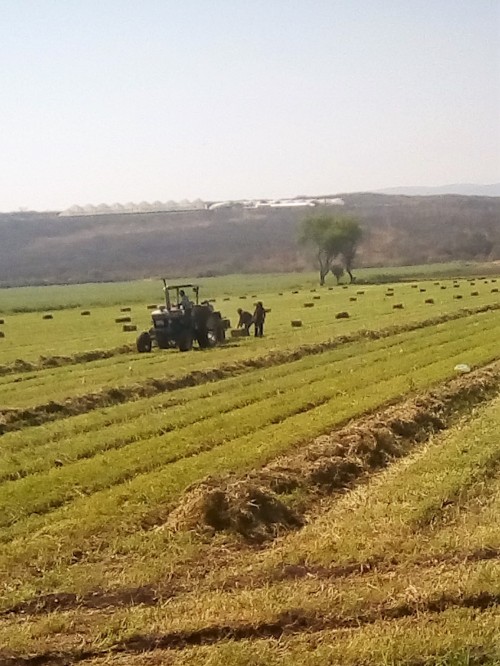 But we weren’t done yet.  We headed to this little town called Monte de Los Juarez (the hill belonging to the Juarez family). There, Best Buddy did some heavy negotiation with the lady who runs the store for 2 turkeys for 500 pesos. So with a full truckload of pacas, 3 adults and 2 turkeys in the cab, we headed home.

The next day, Best Buddy sold the turkeys he bought and our two that had stripped all our saplings bare in the course of an afternoon.  With more money in his hot little (or not so little) hands, my husband wanted to get some more pacas–this time rastrojo (corn stalk). We headed to the same area as yesterday but traveled further down the road.  Just past the town Juan Lucas, we saw a huge towering mound of pacas. We stopped and asked some guy walking down the road if he knew if those pacas were for sale. He said they were and hopped in the back of the truck to head to see the owner. After several whistles and shouts, the owner came to the door.  It’s not polite here to approach a door and knock. Whistling is proper protocol. Drives me nuts though. The owner hollered out that he’d be there in a moment.  He needed to put a shirt on. 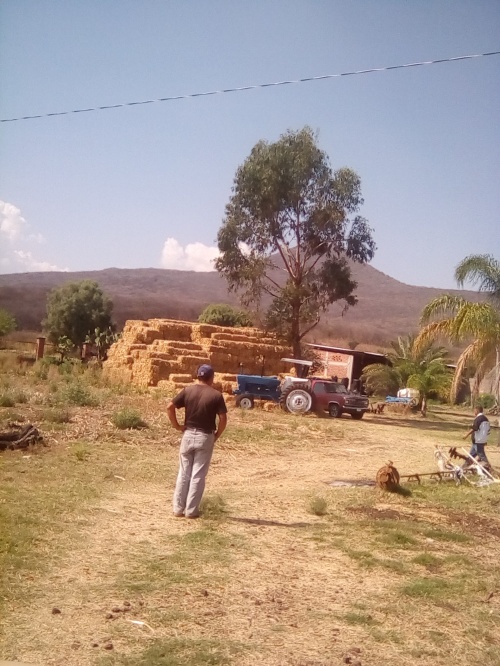 Eventually, he came out and the men conferred and pulled at their chins a bit before the price was agreed upon–13 pesos per paca.  In Moroleon, the average rastrojo paca is 16 pesos. The hitchhiker and my husband loaded the truck up. My husband gave him algo pa’la soda (a tip) and we dropped him off at his house.

On the way home, we stopped at a roadside stand in Ozumbilla.  DELICIOUS! While we were eating, a man with an ice cream tricycle began to hoot and holler.  We looked over and he was gesturing down the road and at our truck. It seemed the man wasn’t able to talk, but he wanted us to be aware that the Federales were heading down the road.  There’s a great deal of suspicion against the police in small towns and not without reason. We didn’t have anywhere else to park the truck, so decided to wait it out. Sure enough, a convoy passed not 5 minutes later with the entire town along the side of the road to bear witness to their passing.

Lunch finished, we headed home. We now have enough feed to last us close enough to the rainy season.  Hooray!

6 responses to “Selling Some Sheep”