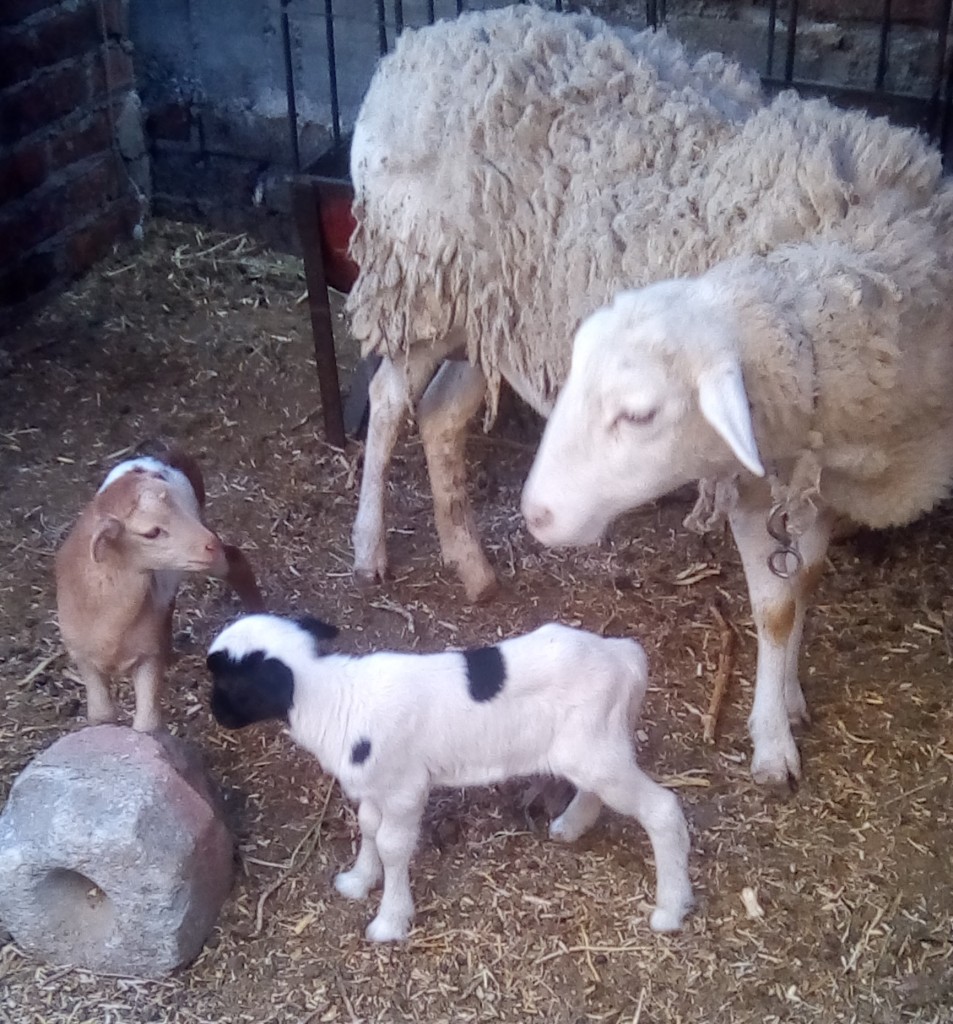 Apparently, the birth of the last pregnant ewe on our compound was the catalyst to sell, sell them all, for my husband. Of course, the outstanding debt on Cookie, the pregnant mare, was another incentive. Anyway, Preggers had two cute little lambs, a boy and a girl, but my husband wasn’t happy. They seemed to be more Pelehuey rather than Charol, meaning they didn’t have the fluffy fur of the mama and must have taken after the dad. Not like my husband has ever sheared the sheep we’ve had now for a year, so what difference does it make if they had fuzzy wool or not?

Anyway, mama and babies went to live with the neighbor down the road. They seem happy enough when I see them occasionally romping through the underbrush in La Yacat.

So then ALL the spare machos had to go. That meant the Borrego Boys, the Chivo boys, Salt and Pepper, and Payaso the one singleton in this bumper crop of twins, were loaded up in the back of the truck and headed to Puruandiro. Although it took all day, everyone was sold, most to become the head mucky muck of their own herds, since the macho needs a’changing every few years to minimize inbreeding. Some women I know subscribe to this philosophy as well, but that’s another story.

So that left Zombeta all alone in the back corral. I convinced my husband to move her to the front area so she wouldn’t die of loneliness. Her pitiable bleats were hard on my heart. He did, onto our “patio” that is Cookie’s corral as well. Zombeta was happy.

A few days later, he found a buyer for Zombeta and we are now sheep-free. She lives now at another neighbor’s who has sheep and seems well enough.

Then disaster struck. The mama of the triplets took sick. The whole side of her face swelled up. We went to the animal clinic who said it might be a tumor. Since it happened overnight, we thought it was more likely a bite from something. They gave us some pain medication and sent us on our way.

I suggested that it might be something the rats dragged in because boy do we have rats this year. They have even managed to find a way inside the house. No rat trap has been able to capture a single one. During the week mama goat was sick, my husband managed to kill 15 small mice, although some committed suicide in the water trough, and one HUMUNGOUS ROUS (rat of unusual size) outside, but, you know, there’s always more.

Mama goat died. We had quarantined her and the triplets to the back corral. We moved the orphans back to the main goat coral and bought some milk. Unfortunately, two days later, Spot died too.

Now we thought it might be ticks. When my husband checked animal ears, sure enough, monstrous ticks. He spent the afternoon plucking them out of the ears of goats, dogs, and horses. Then everyone got some powder in the ear and bath. That seems to have done the trick. No one else has died although this morning, it seems like Bunny, one of the triplets doesn’t want to eat. That doesn’t bode well.

We are trying to stay on top of these mouse and tick infestations and so far are ahead of the game. Now, we are just waiting for Cookie to have her baby, it ought to be any day now.