It’s that time again.  Walking in our backyard has become a hazard.  When you least expect it, heavy green fruit balls just might fall on your head.  So beware!

Our cherimoya, AKA chirimoya, chirmuya or custard apple, tree is loaded this year.   This strange name comes from the Quechua language and means “cold seeds” so called because the tree grows at altitudes of 1,300 to 2,600 m (4, 200 to 8,500 ft) and must have cooler weather periodically or will eventually go dormant.  There are several varieties of cherimoya.  The one in our backyard is the Annona cherimola.

You know a cherimoya is ripe when it has the consistency of a ripe avocado when squeezed, a bit mushy but is not yet brown and rotty. The peel and seeds are not edible.  In fact, the seeds are poisonous when crushed.  They contain small amounts of neurotoxic acetogenins like annonacin.  Dried seeds that have been ground into powder can be used to make a paste that can help get rid of hair lice.

Cherimoya tree bark extract is also dangerous.  If injected it can induce paralysis. I don’t know how anyone would have discovered that by accident, but it’s a useful fact to know. The leaves have long been used to treat hypercholesterolemia in Mexico and scientific study has confirmed that there is a basis for their use in treating high cholesterol. Cherimoya leaves have also been used traditionally in the treatment of diarrhea and dysentery and again, scientific studies confirm its use for those illnesses. 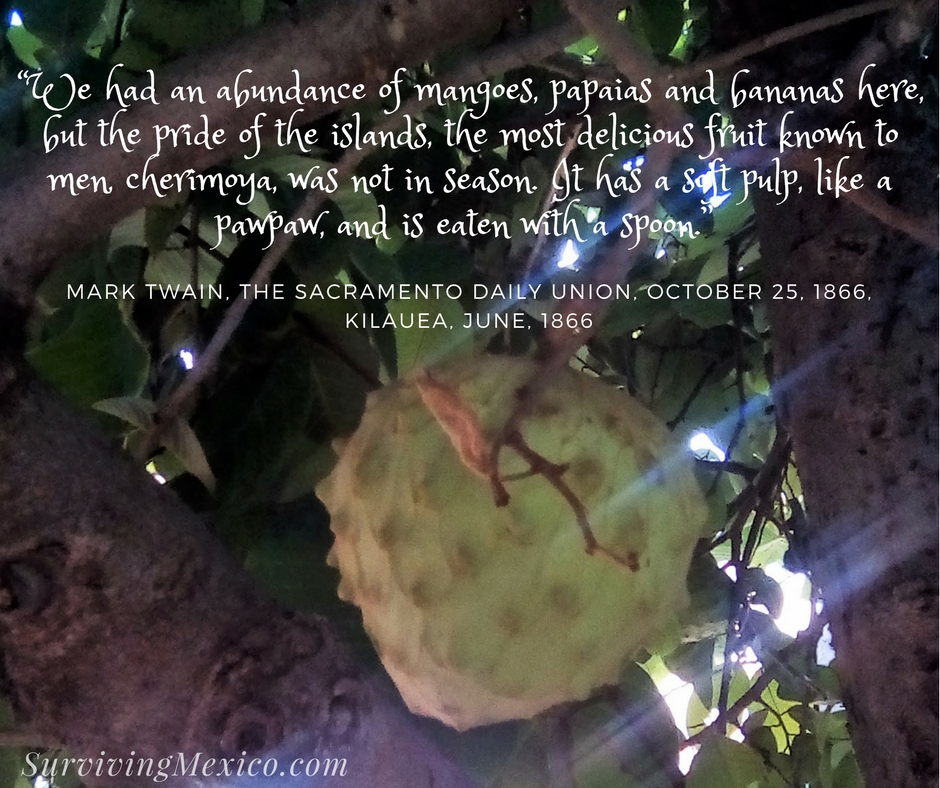 And oh, the taste!  Once you break open a cherimoya, the inside is creamy white. The riper it is, the sweeter and softer the texture.  While I’ve seen descriptions of the flavor ranging from banana to bubble gum, to me, it has a sweet, citrus flavor.  In fact, they are so sweet that I can’t eat more than one.

There’s more to these huge ugly roundish fruits than meets the eye. Cherimoya is an excellent source of Vitamin B6, Vitamin C, fiber, and riboflavin.  It’s been proven to help with depression and to be suitable for the treatment of oxidative stress related disorders including Alzheimer’s disease, Parkinson’s disease, Asperger syndrome, cancer, atherosclerosis, heart failure, myocardial infarction, Sickle Cell disease, autism, chronic fatigue syndrome, and even tempers the wear and tear of normal aging like wrinkles, osteoporosis and gray hair. Cherimoya has also been shown to be successful in the treatment of diabetes and gastrointestinal disorders.

The fruit is only in season a short time, in our area mid-September to November, so it’s best to eat what you can while the cherimoya is available.

Tagged as cherimoya, chirimuya, custard apple, health benefits of cherimoya, how to tell if a cherimoya is ripe