Continuing with my free Herbal Academy Materia Medica Course, I decided to try teas made from the other local herbs I was investigating.  (See Hibiscus Tea, Feverfew Tea)

Coriander, known as cilantro in Mexico, is used in an endless variety of local cuisine.  I love cilantro!  It has such a fresh flavor! I was amazed to discover that not everyone has the same reaction when eating cilantro.  Some people taste soap, metal or dirt instead of freshness.  Apparently, it’s a genetic thing. (See A genetic variant near olfactory receptor genes influences cilantro preference) How unfortunate!

Coriander has quite a number of health benefits.

Coriander Seed Tea is recommended for cystitis relief. Simply steep one teaspoon of whole coriander seeds for 5 minutes for each cup. Strain and add honey or sugar.

Cilantro (coriander) leaves are also jammed packed with good stuff.  It’s rich in antioxidants and dietary fiber and is a good source of vitamin K, which helps in building bone mass, vitamin C, and vitamin A.  Cilantro has been shown to bind the heavy metals arsenic, cadmium, aluminum, lead, and mercury together which helps the body eliminate them altogether.  Cilantro has also been proven to regulate the body’s oxidative defense systems which in turn protects us from oxidative stress. Cilantro has been shown to be as effective as valium in lowering anxiety and improving the quality of the sleep cycle.  Like the seeds, the leaves also lower blood sugar levels and help protect against cardiovascular disease because of its high potassium level.  Cilantro lowers total cholesterol and triglycerides. It can prevent oxidative damage associated with cardiac damage and prevent myocardial infarctions. Cilantro can help prevent colon cancer.

And that’s just the tip of the benefits iceberg! 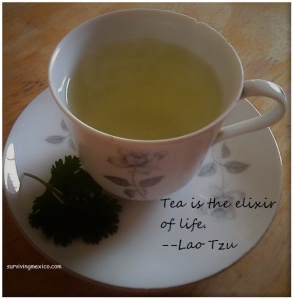 So in line with my herbal classes, I decided to make cilantro tea. The recipe calls for 2 teaspoons of fresh leaves per cup.  Steep up to 10 minutes.  Remove leaves.  Add sugar or honey.  I also added a bit of orange peel to the concoction.

I’ll be honest and say that the taste was ho-hum.  It tasted, well, like cilantro tea.  I think I’ll get all the goodness in solid form like maybe salsa, pico de gallo, on tacos with onion, and so on.  In any form, it’s a tasty part of our Mexican diet and not too difficult to grow.  I’ll post more information once I harvest my first batch this year!