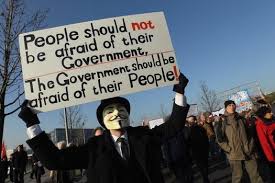 A revolution is a change in power when the population revolts against the current organizational structures, i.e government. And as such, revolution in Mexico is not an uncommon phenomenon.

Throughout the centuries, regional groups have vied for control of certain areas in Mexico, only to be toppled from within. The Spanish came to power in Mexico as a direct result of a general revolution and the decimation caused by smallpox pandemic. (See La Malinche, Surviving a Pandemic) The son of La Malinche and Hernan Cortes, Martin, headed the first failed revolution against Spanish rule in 1566. There were several insurrections over the centuries but nothing large scale until the 1800s. In 1810 Miguel Hidalgo united the people with his Grito de Dolores for another go at revolution (See May 8) After Hidalgo’s death, Jose Morelos led the rebellion and then Vicente Guerrero carried on the fight. Mexico finally gained its independence from Spain in 1836.

All did not rest easy for the fledgling Mexico. Texas rose up in rebellion and won its independence from Mexico in 1836 as well, substantially reducing the overall size of the newly formed country.

Free, and for me, sacred, is the right to think…Education is fundamental for social happiness; It is the principle on which rest the freedom and greatness of the people.–Benito Juarez

Without hardly a pause, Mexico plunged into a 3-year civil war from 1857-1860 over proposed reforms to the constitution and the ultimate power of the Catholic Church. In the face of such political instability, France was able to invade Mexico and set up a monarchy which resulted in yet another revolution (1861-1867) ending with the execution of emperor Maximilian I. (See Battle of Puebla) Benito Juarez was reelected in 1868. However, beginning in 1871 Porfirio Diaz led several rebellions which led to his “election” in 1877 and subsequent 30-year dictatorship. During this period, Mexico lost control of most of its largest businesses to foreign companies and the resultant repression of the underclass led to the revolution of 1910. Emiliano Zapata, Venustiano Carranza, and Pancho Villa served as commanders of opposing forces during this confusing revolution, while the US repeatedly attempted to invade during the 11-year chaos. 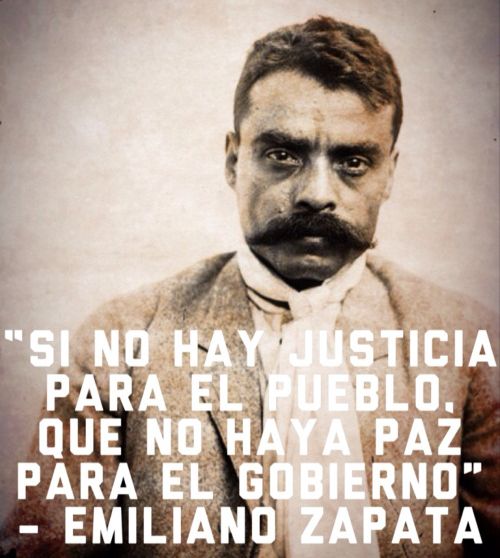 If there is no justice for the people, let there be no peace for the government. –Emiliano Zapata

From 1911 to 1932, the Mexican government was far from stable. There were 15 presidents during this time period, with some serving just a few months before being assassinated and one serving a mere 45 minutes before resigning. The sparks of revolution were fanned into flame again. The Cristero Rebellion occurred from 1926 to 1929 over the attempt by the federal government to reduce the power of the Catholic Church.

From 1940 until 1994, Mexico established 6-year elections. Strangely enough, each time, the PRI candidate won, leading to speculation on the overall impartiality of the election process.

Since 1994, Zapatista Army of National Liberation (EZLN) has been at war against the Mexican state. The Zapatista Revolution began as a protest against the signing of NAFTA which has done nothing for the Mexican people except widen the gap between the rich and the poor. EZLN also demanded democracy for the country where one political party (PRI) held power for more than 70 years. (See Politicking). 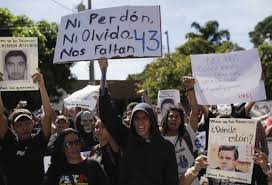 No forgiveness, Not forgotten, We are missing 43!

Even more recently, is the social movement for revolution sparked at the disappearance of 43 student teachers (See El Dia del Estudiante and La Llorona) in 2014.  As well as the teacher protests in Oaxaca against governmental education reform in 2016.

It remains to be seen whether a full-scale revolution results. 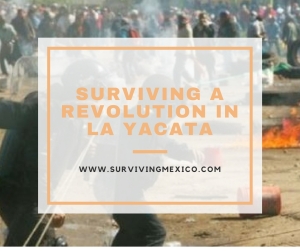 So how can you survive the next revolution?

Anonymous has some interesting suggestions in addition to the regular, run of the mill, Prepper be-prepared recommendations.

The first thing to do is be aware of a potential situation. There are always warning signs. Riots in urban areas, media cover-ups, censorship, unsubstantiated rumors and so on. Once you have established an area is ripe for revolution, do your Prepper thing, i.e. have food, water, and medical supplies stockpiled. Do not use drugs or drink alcohol excessively as they will make you vulnerable and you’ll need all your wits about you in a crisis situation. Do not trust the police under any circumstances. Document your experiences in order to report atrocities to international media but keep it discreet. Do not use your mobile phone as it will be monitored. Stay away from violent situations and urban areas.

So with so much history in revolution, rebellion and mass uprising, La Yacata is the place to be for the next conflict. After all, we’ve staged our own successful coup (See The Birth of the Revolution). We’ve learned not to trust the police (See Safety and Security and Justice for All? and Just another weekend adventure). I’ve become an expert on documenting my experiences (See Surviving Mexico Adventures and Disasters). We are on the way to becoming self-sufficient (See Building a dream, Constructing a life). We never have money on our mobile phones to make any incriminating phone calls. We are not in an urban area. And I stay away from drugs and alcohol at least so there’s at least one sane adult present at all times.

So in the event of revolution, I’ll see you here! 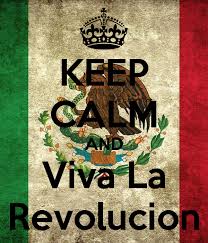