So another April A to Z challenge has finished and here’s what I think about that.  This year my blogging group and I did one challenge as a whole instead of 26 individual posts.  That took a lot of the pressure off and I was able to dedicate more time to other things. Even with less accountability, I found that I didn’t have the time I needed to devote to the challenge this year.  I felt like I only was able to visit a smattering of other blogs and comment on even fewer. I just had too much going on in April. Such is life I suppose.

Anyway, since this was an A to Z challenge, I thought I’d share the full alphabet our group wrote. There’s some great information in these posts so you should go ahead and check them out!

B–The Many Aspects Of Beaches In Baja

C–Catavina, The Beauty Of Rocks & Cacti

F–Family, Blood From A Far And As We Create A New One Here In Mexico

J–Jungle Living at its Best

L–Loving the Land of Limon

O–Olive Oils, Oh My What To Do!

S–San Felipe, The Land Of Gringos

V–Valle De Guadalupe, A Place Of Many Options

W–Wildflowers and Butterflies in Mexico

So until next year’s challenge—Hasta la vista Baby!

A to Z Challenge Reflections

Whew!  We made it!  Now you know that the best bug out location is found in central Mexico.  Let me know when you are ready to make the move.

Posting every day was an exhausting experience.  I have to be honest here.  I worked on these posts for about 6 months prior to the challenge.  Yep.  Sure enough. Even after having a draft ready to post for each of the 26-day challenge, it was a lot of work.  Some of the links I included no longer existed.  There were some typographical errors to fix.  Sometimes new information had come to light since I had written the draft (like that volcano crater forming just minutes from my home).   And then sometimes I just wasn’t happy with the draft and redid the post completely.  Facebook decided it would rather share my disclaimer image than any of the photos and graphics in my posts, so that was annoying.  Then I had some additional obligations and blog posts I had to SQUEEEEZE in during the month.  Well, I made it!

I expect reading daily posts was a bit overwhelming for you as well.  Did you miss any? I’ll post links at the end for you.

Part of the A to Z Blogging ChallengeA to Z Blogging Challenge was to read and comment on other participants’ blogs.  This year there was a Bingo board to help with the motivation.  Although I worked diligently at finding the Bingo squares (and sharing them on Twitter) I wasn’t able to get a Bingo.  Darnit!  I hate to lose!  I did read a number of good blog posts though in the process, so I guess it wasn’t a total waste.

Right now, I’m not sure that I will participate next year in the challenge.  I haven’t come up with a fabulous and relevant topic yet.  If you have any ideas, let me know, please!  I have determined to do a 31-day challenge sponsored by Writers Bra,  but don’t worry,  I plan on spacing the posts out over the course of several months.

Here are the links to all 26 posts in the series A to Z Reasons Why La Yacata is the Place to be WTSHTF (when the sh*t hits the fan). 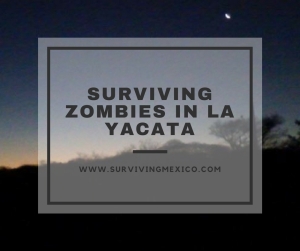 I have a love/hate relationship with zombies. I love to hate them. Really. So going into this post, I didn’t know much more about them other than they are resuscitated undead that can be stopped by a blow to the head. However, I did some zombie research and have discovered that the best way to survive a zombie apocalypse is to prevent from becoming a zombie because once you’ve been infected, well, that’s pretty much it for your higher thinking skills.

Therefore, as prevention is the key, I’ve listed the top 10 things that cause zombification, in no particular order, so that you can avoid them like the plague (no pun intended). 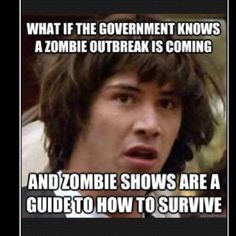 1. Pesticide use causes zombies. Do not breathe, touch or ingest anything with pesticides. Go organic. 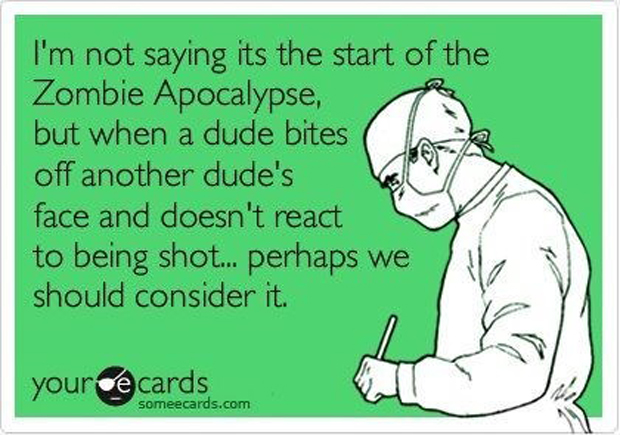 2. Steroid and synthetic drug use cause zombies. Do not use steroids or synthetic drugs. Find natural cures. Switch to marijuana. (I can’t believe I said that!)

Movies: The cabin in the woods

Articles: 23 Health Benefits Of Marijuana, All The Reasons Pot Is Good For You, Medical cannabis, Researchers Finally Confirm that Marijuana DOES NOT Lower IQ in Adolescents

3. Alcohol abuse causes zombies. Do not overindulge in fermented beverages. There is some research that suggests alcohol in moderation may be beneficial.

Movies: Days of Darkness, Night of the Living Dorks 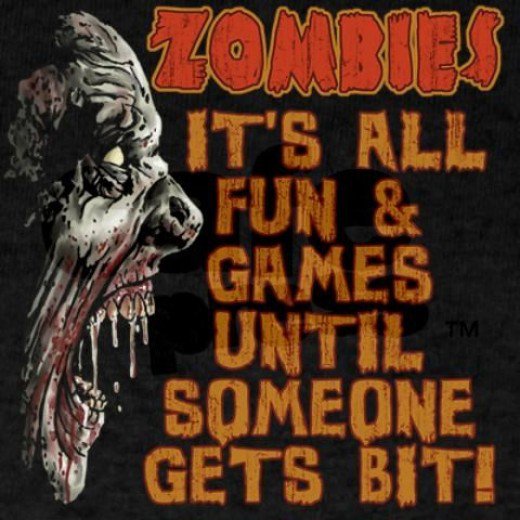 Articles: Does Soda Affect Your Brain?, 8 Negative Effects Of Soda On Your Brain , This Is Your Teenager’s Brain on Soda,  America’s soft drink addiction,  10 IRREFUTABLE evidence that GMO can harm you! , This is how GMOs damage your brain, Health Hazards of Genetically Engineered Foods, GMOs/Nanofoods, Girl, 14, left brain-damaged after eating KFC chicken twister forced into new court battle as food giant appeals $8m payout, Mad Cow Disease What the Government Isn’t Telling You!, Farmed Salmon – One of The Most Toxic Foods in the World, 10 Reasons To Avoid Soy At All Costs… , 20 Practical Uses for Coca Cola… Proof That Coke Does Not Belong In the Human Body, 9 Toxic Fake Foods Made in China Contain Plastic, Pesticides and Cancer Causing Chemicals

6. Drinking from an infected water supply causes zombies.  Avoid water laced with chemicals such as fluoride or pesticides. (See #1) Collect and distil your own drinking water. 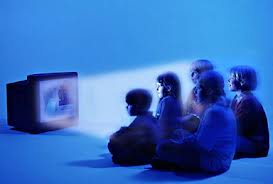 7. Watching TV causes zombies.  Get rid of your TV.  Media is a form of brainwashing.

Articles: Children who watch too much TV may have ‘damaged brain structures’, The effects of TV on the brain, Gray Matters: Too Much Screen Time Damages the Brain, 6 Brainwashing Techniques They’re Using On You Right Now, Research Study Explains How U.S. Media Brainwashes The Public , How We Are Brainwashed by the Media, Television is Turning Us Into Zombies

8. Receiving chemical treatment for a disease or a vaccine for prevention of a disease causes zombies. Use natural cures. Do not get vaccinated.

9. Being exposed to toxic, radioactive or nuclear waste in the air, soil or water, whether by accident or design, causes zombies. Stay away from test sites, nuclear reactors and leaking facilities. (See Surviving a toXic cloud and Surviving Nuclear disaster) 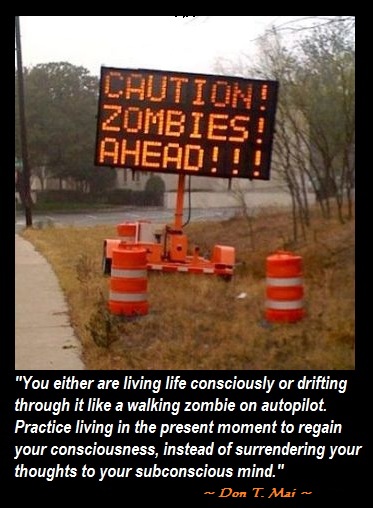 10. Aliens and asteroids cause zombies. There isn’t much you can do about this one, folks. (See Surviving UFO invasion). Fortunately, it seems the least likely cause of zombies.

Movies: Gangs of the Dead, Hide and Creep, I was a Zombie for the FBI, Invisible Invaders, Plan 9 from Outer Space, Zombie Self-Defense Force, Alien Dead, Battle Girl: The Living Dead in Tokyo Bay, Brain Dead, Days of Darkness, The Dead and the Damned, Germ Z, Night of the Comet, Slither, They Walk, Undead, Wyrmwood

Certain groups of people are especially at risk to becoming zombies. If you belong to one of these groups, it behooves you to take special precautions against becoming a zombie.

1–Being in prison places you at a higher risk of becoming a zombie. Stay out of prison. 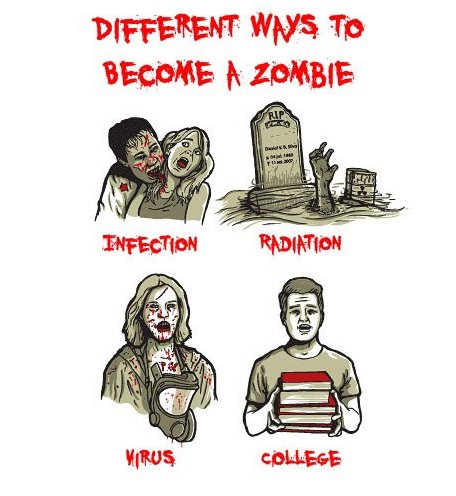 2–Being a college student places you at a higher risk of becoming a zombie. Don’t go to college. Self-educate.

Movies: Brain Blockers, Dorm of the Dead, House of the Dead 2, Night of the Creeps, Re-animator, Voodoo

Articles: 9 Ways Going to College Affects Your Health, Is a College Education Worth It? , 6 Disadvantages Of Going To College, 10 Disadvantages of College

3–Being a high school student places you at a higher risk of becoming a zombie. Unschool.

4–Being in the military places you at a higher risk of becoming a zombie. Do not join the armed forces of any country.

Movies: Uncle Sam, War of the Dead, Wasting Away, Zombie Strippers, Zone of the Dead, The Dead Next Door, Zombi 3

La Yacata is the best place to survive a zombie apocalypse. We collect our own water, grow our own food, do not have a television, choose natural health options, do not use pesticides, believe in self-education, live far from nuclear facilities, and have a rooftop sniper vantage point, should worse come to worst. Yes, it would be easier to give in and become a zombie, drink coke and eat hot dogs, but where would the fun be in that? When you see the danger you are in living in modern society, we’ll see you in La Yacata!

Filed under Carnival posts, Death and all its trappings, Health, Safety and Security