Surviving a Quake in La Yacata 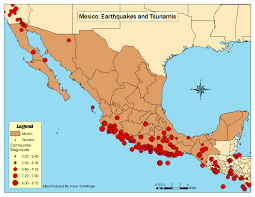 Mexico is located on three large tectonic plates(Cocos plate, Pacific plate, and North American plate) which makes it one of the most earthquake-prone and seismologically active countries in the world.

In 1985, Mexico City was hit with a series of earthquakes. The foreshocks, aftershocks and main earthquake with a magnitude of 8.1, caused somewhere between 5,000 and 45,000 deaths with many of the bodies never recovered, at least 50,000 injuries and left another 100,000 homeless. Mexico City was built an ancient lake bed, which further added to the instability of the area. Over the course of the destruction, 420 buildings collapsed completely and another 3,124 buildings were seriously damaged.

Odds are if you are in Mexico for a long enough time, you will experience an earthquake. We’ve even had tremors in Moroleon since we’ve lived here. It’s par and parcel of living in such a seismically active country.

So how can you optimize your chances of survival in the event of an earthquake?

Experts recommend staying indoors and moving to the interior walls, taking refuge under well-built tables or desks. Stay away from areas near windows, hanging wall objects, heavy furniture or fireplaces. The first floor of a building is safer than subsequent floors. On the first floor, the danger comes from being covered in rubble. On other floors, there is the additional danger of falling and then being covered with rubble, exacerbating injuries. Although the professionals like to say that since the 1985 earthquake, buildings in Mexico have been redesigned and reinforced to withstand earthquakes, we all know how permits are bought and sold and contractors skimp on materials to pocket just a little more.

If you are outdoors during an earthquake, move to an open area where you are less likely to be hit by falling objects, such as buildings, trees or power lines. Stay away from bridges and keep alert for sinkholes. Personally, I think outdoors would be much safer in the event this natural disaster. Fortunately, La Yacata has quite a bit open space, thus putting it at the top of a survival environment in the event of an earthquake.

8 responses to “Surviving a Quake in La Yacata”