In the Beginning. . . The Birth of the Revolution

There are simple things, every day, that take your breath away.

When we moved to la Yacata, the encargado Chuchi, the person in charge of it all, assured us that it would be a matter of months before the area would have basic services such as electricity, running water and sewer. The pipes were laid, the water storage tank for the community was installed and the posts were in place, with transformers. Six years later, we still do not have any of these services. Furthermore, the water storage tank has rusted, the sewer pipes are not regulation size AND the posts we put so much store by, were never registered with the electric company and most likely stolen from other areas and planted here.

The colonos (colonists) of La Yacata convened and determined that in order for any progress to be made, we would have to do it ourselves. Additionally, the presidency of Moroleón, had on various occasions, made it clear that while Chuchi was in charge, there would be no assistance from their offices.With that ultimatum in mind, the assembly determined to vote a new mesa directiva (committee) to continue the work necessary in La Yacata. The first voted into office was J, son-in-law of one of the first property owners. J made it clear that he didn’t have excessive time to donate to this cause, but the vote was cast in his favor. Secretary was voted as el plomero, a plumber-electrician who has lived in La Yacata with his family for more than 5 years. El plomero also stated he had limited time to give but would do what he could. I was nominated for treasurer, but objected, mentioning that in case I needed to open a bank account, my immigrant status might cause problems. This objection was dismissed on the grounds that I could open the account for La Yacata in my husband’s name, who was then voted as my vocal, hence no real impediment to my accepting the post. But I objected again, really not wishing to have such a responsible post. However, my objections were overruled with this reasoning–I was a gringa and a woman, therefore was the least likely of the bunch to make off with the money collected. No lie! I objected a third time, saying that my Spanish was not adequate and was again overruled. Numbers were the same in either language, so problem there. The vocales (understudies) were voted as el taxista, (taxi driver), and el profe, (a retired teacher) and my husband, a bricklayer.

This make up of the mesa directiva was insisted upon by J.  He felt that we should include people who live in La Yacata, such as el plomero, my husband and myself and people who visit La Yacata on a regular basis, such as el taxista and el profe, and a representative of property owners that did not frequent La Yacata as often, such as himself.  Of the 5 members, el profe, J and I had university educations.  The others were not-so literate.  Again, this was representative of the property owners, some being professionals with investments to protect in La Yacata, some being campesinos (farmers) whose every penny went into the purchase of one of these lots for themselves or their children to someday take up residence there.

A request for a cooperation of $50 pesos was made in order for us to purchase necessaries to begin operations and pay for ads in the paper or radio announcing future meetings.  This was given freely with a mere notation of the names and a promise of receipts when we purchased a receipt book. (In due course, each person who contributed was given a receipt for their $50 pesos signed by me, newly elected treasurer). 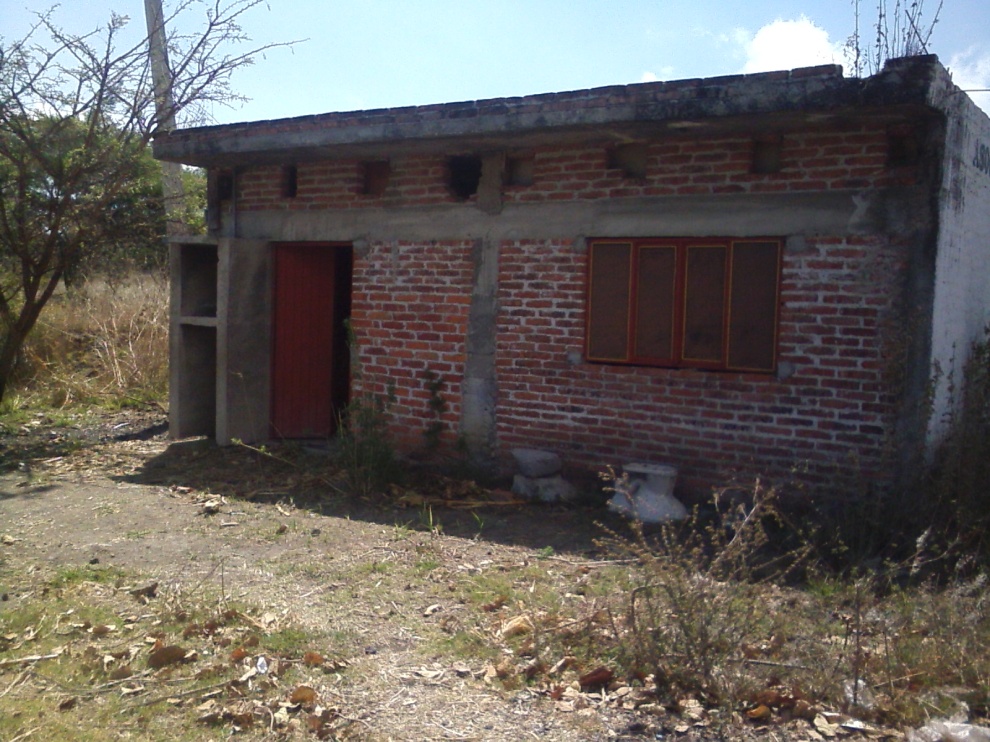 This is the building that holds the water pump that supposedly connects to Moroleon and the water tower.

We began with our official meetings of the mesa directiva as all revolutions must, in secret.  As I was the token woman, in some form of strange notion of chivalry, our meetings were located at our house.  This meant that our meetings were often conducted by candlelight since we had no electricity, which added an eerie feeling of revolt.  This also meant, that as the sole woman, I was expected to whip up some refreshments for the hungry menfolk, although I worked more hours than most of them.  And being me, I was the most vocal about what our needs were and what our plans should be, causing some discomfort to my introverted husband.  But what must be said, must be said, without sugar coating.  (Or perhaps it was that my command of the language was still lacking and I said things bolder than need be.)  Either way, my role was both hostess and team leader during these meeting. 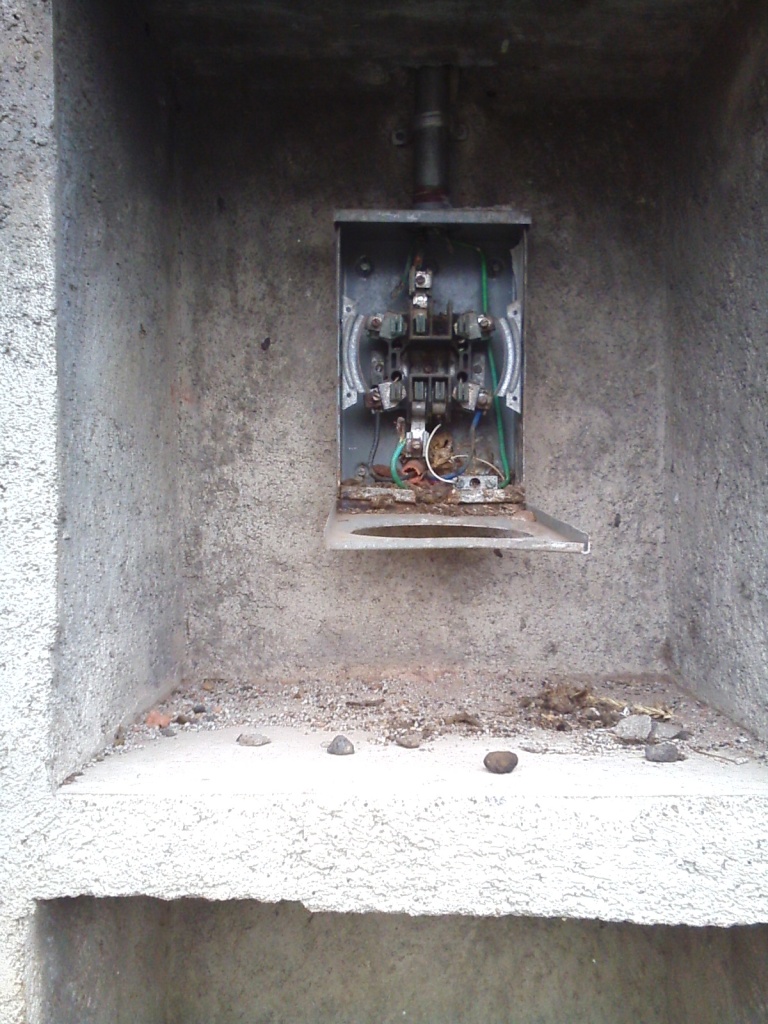 This is the electric box outside the pump house. All the copper wires have been stolen.

Within the next 6 months, individually and in groups, representing La Yacata, we went to the pertinent offices to see what could be done about the situation.  Agua potable (water) said that water could be run up to the right hand of god if the price was right. (Basically asking what our mordida would be.) Desarollo Urbano (the town planning commission) said that not in 20 more years would La Yacata have an adequate drainage/sewer system and we should sell our lots and get out now, buying somewhere else.  Ayuntamiento, the office that grants the permit to change the zoning from farmland to residence, has denied us this document stating that La Yacata is not fit for human habitation, although 10 families are currently living there.  The president at the time of Moroleón himself did not want to get involved because of personal problems with Chuchi.  And Chuchi did not want to give up the reins and has put obstacle after obstacle in our way. 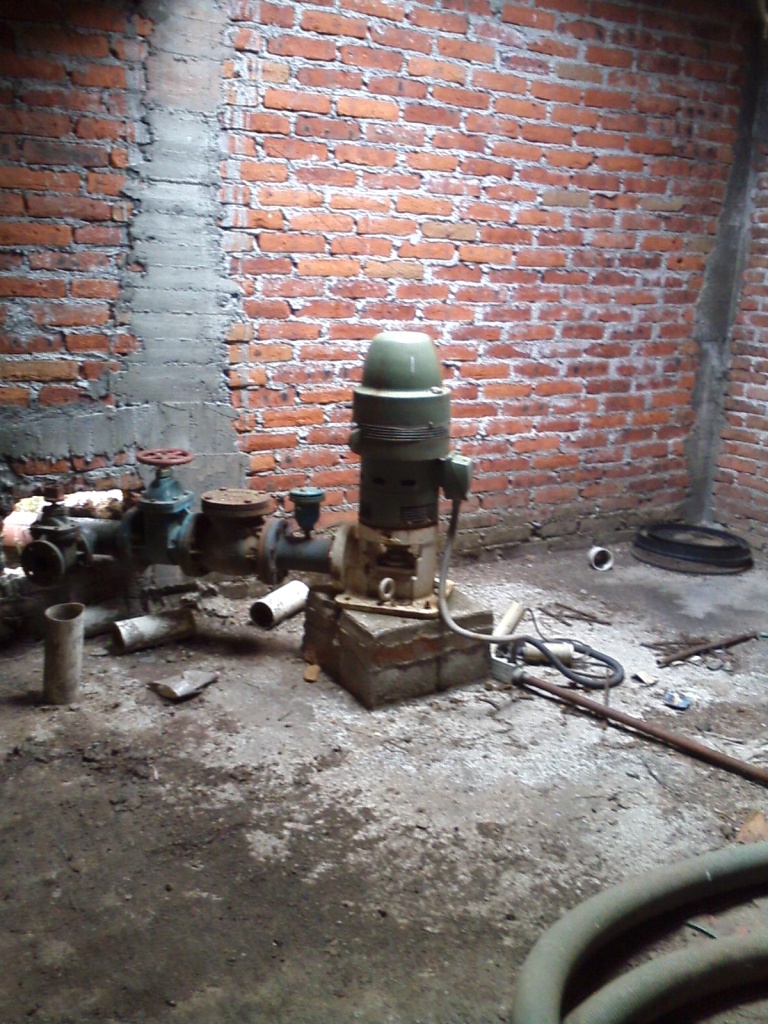 This is inside the pump house at the entrance to La Yacata. The pump is still there, but all the pipes connecting the pump to anything have been stolen.

10 responses to “In the Beginning. . . The Birth of the Revolution”