Lady and the Plow

My husband decided that he’s going to do some sharecropping again this year. He hasn’t the past few years because it’s really a lot of work and little gain. But, since we have these animals to feed during the dry season, it helps to have a small stockpile of fodder to hold us over.

The rainy season doesn’t officially start until the third week of June. This year, being 2020 the year of unpredictability and all, we’ve already had several light showers of rain in May–which hardly ever happens. So most of the farmers have been out barbechando (readying up) the fields.

My husband tried to get a guy with a tractor to plow the area he had permission to plant on. It has lain fallow for about 5 years. The tractor guy did one row and called it quits. He said it was too rocky and he didn’t want to damage his equipment.

So then he tried to get another guy who has two horses to plow up the field. That guy said he was too busy with his own fields to hire out.

Now, we’ve plowed before. Fiona and our previous horses Red and Beauty, have done excellent work. However, my husband sold the plow. Actually, he sold the plow three times, after buying it back twice. Currently, we have no plow. So he rented one from a neighbor for the week for 200 pesos.

He hitched Lady up to the plow and away they went. My husband was absolutely delighted with her performance. In fact, he was so delighted, he set her up a new stall in the back yard. She has more space, isn’t together with the goats so Jolina isn’t jumping in her food dish, and can be entertained by Fred and George’s gladiator antics.

Unfortunately, she stripped the guayaba tree of its leaves overnight and keeps knocking over the rain barrel. She also has been biting the wood on the bars around her corral. My husband was worried that she had a vitamin deficiency or some other issue, but when I looked it up, most experts believe horses bite the wood of their enclosures because they are bored. We all know that Lady is too smart for her own good. Remember how she kept opening the door for the goats?

Lady’s new area doesn’t have a gate yet, just those bars that you have to slide all the way out for her to come out. My husband keeps saying he’ll get to it, but he’s got other things on his plate at the moment. He went on a caminata (community horse ride) last week to Los Amoles (and brought us home a cold) and is going on another one this week (and will probably bring us home another virus). As a result of his “busy-ness” none of the quarantine projects are finished yet, including Lady’s new stall. (Can you tell I’m just a tad bit annoyed?)

Anyway, it rained this week, so some seeds went into the ground. We’ll see how Tlaloc treats us in La Yacata this year! 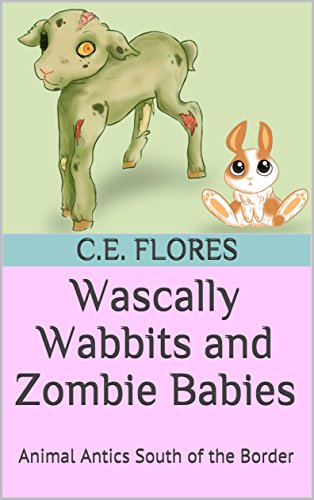 Since we’re practically bursting at the seams with our animal population, we had to move Lady from her stall to the patio to make some extra room for the new kids. The result of the move was a seriously injured Lady.

What it looks like happened is she lay down in the night to sleep. When she stretched, her hoof went under the fence, which wasn’t a problem while she was on the ground. However, when she got up, it got stuck on one of the bars of the fence. She panicked and pulled up, and the bar went through the top of her foot and embedded itself about 2 inches into her nail.

We heard her thrashing about around 6 am. I don’t think she had been stuck too long, maybe 15 minutes or so. When we came out to investigate, we were shocked she hadn’t screamed, because it looked pretty bad. My husband was feeling woozy just looking at it.

I held Lady’s head, stroked her flank and talked to her throughout the whole ordeal while my husband cut the wires on the fence. That wasn’t enough to get the hoof out, so he had to use a saw and cut the bar several inches above where it entered her foot. Once that was cut, she could stand but still had this 6 inch metal bar in her foot.

My husband tied a rope around one end and had my son pull straight up on it while he held down the hoof. In a few minutes, the bar was out and the wound was bleeding profusely. My son pulled so hard that when it came loose he gave himself a black eye. My husband also cut his arm on the wire in the process. Personal injuries aside, we distracted Lady with some alfalfa as my husband sprayed some “azul” antiseptic on the wound. Infection is something we definitely want to avoid.

The Puppers wanted to help their big doggy friend (or at least that’s what we think they think the horses are) and tried to lick the wound. Since it already had some antiseptic on it, we didn’t want that. So Terry had to head to his doggy day care up the road (the backyard of my sister-in-law’s house) so the Puppers could be in our backyard since George and Terry still aren’t friends.

Terry wasn’t thrilled to be alone in the dark up there, but desperate times call for desperate measures.

The next day, my husband brought home a tetanus shot for lady. After reading the directions and understanding that we had to wait 21 days after the application para sacraficio (sacrifice), we headed out to administer the shot. As my husband is afraid of needles, he told me he’d cover Lady’s face and I would give the shot. Fine. I attached the needle and was all ready, but my husband didn’t think it was tight enough. He took the syringe from my hand and pressed the two sides together–ejecting all the medicine in the process. So much for the tetnus shot.

She’s sad and depressed, but still up to her old mischief. She managed to unhook the latch on her restraint by pressing it against her food dish. Then casually wandered over to the barrel full of corn and popped the lid, helping herself to a cob or two. I watched her do this from the front porch. When I called my son to latch her restraint again, she lifted her hoof to him showing him her injury. She got two more cobs of sympathy corn from him.

Still, she’s been off her feed lately and is looking positively scrawny. Fortunately, the wound in her foot hasn’t been infected and is starting to scab over. Poor Lady.

In order to bring the vehicles and licenses up to speed, we needed more cash. So one of the horses had to go. It was a toss-up between Lady and Cookie but my husband was leaning more towards Cookie because Red and Lady are best buddies.

The chicken feather guy made an offer for Cookie. As soon as I heard that, I vetoed the idea. Absolutely not. I’ve seen how malnourished his animals were. My husband said that no matter whom we sold Cookie to, she might be mistreated. I pointed out that with the chicken feather guy is was 100% sure. So no deal.

I think the chicken feather guy wanted Cookie because there is a distinct possibility she is pregnant with his stallion’s colt. Odds are Lady is also pregnant, which means if we didn’t sell one or both of the mares, we’d have 5 horses next summer. We don’t have space for the animals we have now, let alone FIVE horses.

Then an interested party in the next village over offered 5 goats in exchange for Cookie. I again vetoed that deal. We don’t have room for the 10 goats we have now, much less 5 more. And we need cash for the vehicle permits. Did my husband think we could just take a goat down to the office and settle up? No, not happening.

Finally, one of La Yacata guys offered $300 USD for Cookie. We knew the guy, we knew where Cookie would be stabled, and we knew she’d be fine. Since my husband paid $10,000 pesos for a pregnant Cookie earlier in the year, it was a substantial loss. Of course, we kept Red who in a year or so will be valued quite a bit, so it might work out in the end. Maybe.

I also vetoed the payment being in U.S. dollars since then we’d have to run around and try to get the best exchange rate, wasting valuable time. So, the guy went and had his money exchanged himself. At 18 pesos per dollar, my husband received $5,400 pesos. A fabulous deal on a perfectly good mare for the other guy. Not so much for us.

The money was surely burning a hole in my husband’s pocket because he went immediately to the Honda distributor to order some parts for his motorcycle. They ought to be here next week.

We also went to ask about the cost of all the paperwork we need to do for my new Kymco, his Honda and Butch the truck. It’s going to cost a pretty penny. But first, I need to renew my license to have the Kymco put in my name.

So back to Red. The first night he was extremely upset. He couldn’t be put in with Lady because he’d try to nurse and she wasn’t having any of that. So being all alone in his stall upset him. When we opened the door the next morning, he ran over to Lady’s stall. She reassured him with nose kisses and gentle mane grooming. He calmed right down.

But when the herd went out for the morning foraging, he became agitated again and ran around for a while. He eventually gave up the search for his mother and settled by Lady to graze.

The second night was easier. Papa Chivo went out several times in the night to make sure he had enough feed, which kept his agitation to a minimal.

That afternoon, however, there was the rooster incident. When my son went out to check the water supply for the animals, the rooster, FuzzyFoot was lying on the ground in Red’s stall dying. He had me come out and as we watched FuzzyFoot died.

Certain that my husband would blame the dogs, we tried to figure out what had happened. It’s possible Red kicked the rooster or maybe laid down on him by accident. We were sure that it hadn’t been any of the dogs since there were no bite marks, scattered feathers or blood.

When my husband got home just a few minutes later, we gave him the news. He thinks the rooster may have eaten a scorpion and thankfully agreed it wasn’t the dogs. Of course, now we need a new rooster to greet the morn’ and encourage the egg-laying.

Our dogs really disliked FuzzyFoot. When he would crow, all three dogs would set about howling in perfect harmony or at least what they believed to be harmony. So now that he’s gone, the mornings are quite peaceful.

Red carried on for another two nights, but then seemed resigned to his fate. As long as he can check in with Lady and has a full barrica (barrel) of feed, he’s ok. We’ll just have to wait and see if Lady presents with a foal next year, which will again put a strain on our animal living quarters. By then, Red will be a young stallion.