This is what La Yacata looks like most of the year.

Mexico is prone to droughts. Many areas are desert, but that doesn’t mean they are uninhabited. (See Also Chihuahuan Desert, Sonoran Desert, Indigenous Desert People)

Mexico experienced severe droughts in 2012 and 2014, not so very long ago, and it’s likely to happen again.

Lake Chapala, one of the primary sources of freshwater for Mexico City, is drying up. Rivers have been known to just disappear as well.

As a result, Mexicans overall are very water conscious. We, in La Yacata, hold water as sacred as it takes such an effort to get it to our house. (see Water Woes) After I read some articles about how to conserve water, I realized how much I have changed as regards to water consumption from when I lived in the U.S. Most of the suggestions in these lists were second nature to me now. (See also Emergency Preparedness, 100 Ways to Conserve Water, Drought Tips)

So here’s how we conserve water in the kitchen:

We don’t have a dishwasher since we have no electricity. That means everything is washed by hand in a very precise manner. I soap up a sponge and then use it on the pile of dirty dishes, stacking them to the side of the sink. Once I have a pile, usually of the same type of dish, I move them back into the sink and rinse, sometimes with the tap, or if the water is really low, with a scoop from a bucket of water. Then I put them on the drying rack to dry. I only do as much as can be stacked. The rest can wait. Anything crusted on gets another pass with the sponge and might be left to soak. Pots and pans are also sprinkled with water and left to soak, sometimes until the next load is done which might not be until the next day. Any food particles are caught in the mesh strainer and thrown out to the chickens for a bit of a treat.

We also have the one-glass rule. We only use one glass for the three of us to drink water from. It sits under the tap of the garafon (water cooler) to catch any drips. It may sound unhygienic and we don’t hold to that rule when anyone is sick, but it sure does save on dishes.

When we boil something that needs the water dumped out, we often use that water on our plants once it’s cool. Waste not, want not!

Conservating water in the laundry room:

We have a hand pump which brings the water from the ajibe (dry well) to the second floor. Our wash water is reused with most of it heading back down to the back yard for the fruit trees. Water left in the bucket is used to water the indoor plants or as mop water then used on the plants. (See After Ecstasy, the laundry)

Conserving water in the bathroom:

We have a shower instead of a tub. Our showers are short, less than 10 minutes typically. Days that the hot water heater is out of commission, they are even shorter. Brrr! We make sure there are no leaks from the showerhead, faucet or toilet, ever. A drip left all day could be the difference between having water tomorrow and not. We always turn the water off when brushing our teeth–who leaves it on anyway? We have a fingernail brush to scrub our hands before we turn the water back on to rinse. We use our towels, one per family member, for a week unless they are super dirty. That keeps the laundry amount down and isn’t the idea that you use a towel AFTER you’re already clean to dry off?

One suggestion on the water conservation list that we do because it’s customary here in Mexico is to throw the toilet paper into the wastepaper can rather than into the toilet. The reason that’s done here is to prevent clogged pipes. Most of the water pipes (our house included) are embedded in the cement floor. There isn’t any floor space underneath. So in the event of a super clog, a plumber could not get under the house and open the pipes. Another suggestion on several conservations lists is flush less often. Our house rule is “If it’s yellow, let it mellow. If it’s brown, flush it down.” That’s probably more than you really want to know about our hygiene habits, though!

We don’t have toy water guns or a pool. We collect rainwater in barricas (barrels). When we change the animals’ water, we use old water on the fruit trees. We monitor the amount of drinking water our animals have. For the horses, we don’t leave a bucket of water in the stall because it’s likely to get spilled and spilled water is wasted water. We don’t wash our vehicles. Yes, that means sometimes they are pretty dirty, but it will eventually rain. We don’t have a lawn. Anything that grows in our backyard is already pretty much drought resistant, other than the fruit trees. We have cactus, feverfew, Klip dagga, aloe and a few other native plants that grow whether or not we water them. We don’t irrigate our crops which means we don’t plant until the rainy season starts. In the event of drought, we won’t have too many crops, but that’s the risk we take.

Of all our off-grid accommodations, I’ve always felt that our water system has been our weakest aspect.  La Yacata has no natural running water, like a stream or underground spring.  There is no connection to the main town water line either.  (See Water Woes)  Therefore, we have to pay for a water truck to make deliveries or go and get it ourselves from nearby towns that do have natural water supplies. Those nearby communities also have areas where we sometimes go to wash our clothes, thereby saving our own precious water. We also are able to fill our tinacos (water storage containers) and garafones (water cooler bottles)and bring them back to our house. 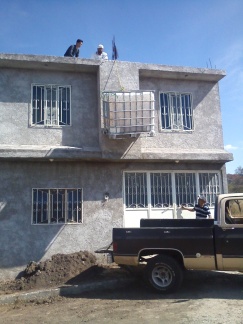 This past winter, we decided to upgrade.  First, we removed the portable water storage container from the back porch.  We gave this to my father-in-law to add to his overall water storage capacity.  He has quite a number of goats that need water daily.  This required an up and over approach.  My husband, his brother B, and my son lifted it up to the roof, then lowered it into the back of the truck.

Run off from the roof 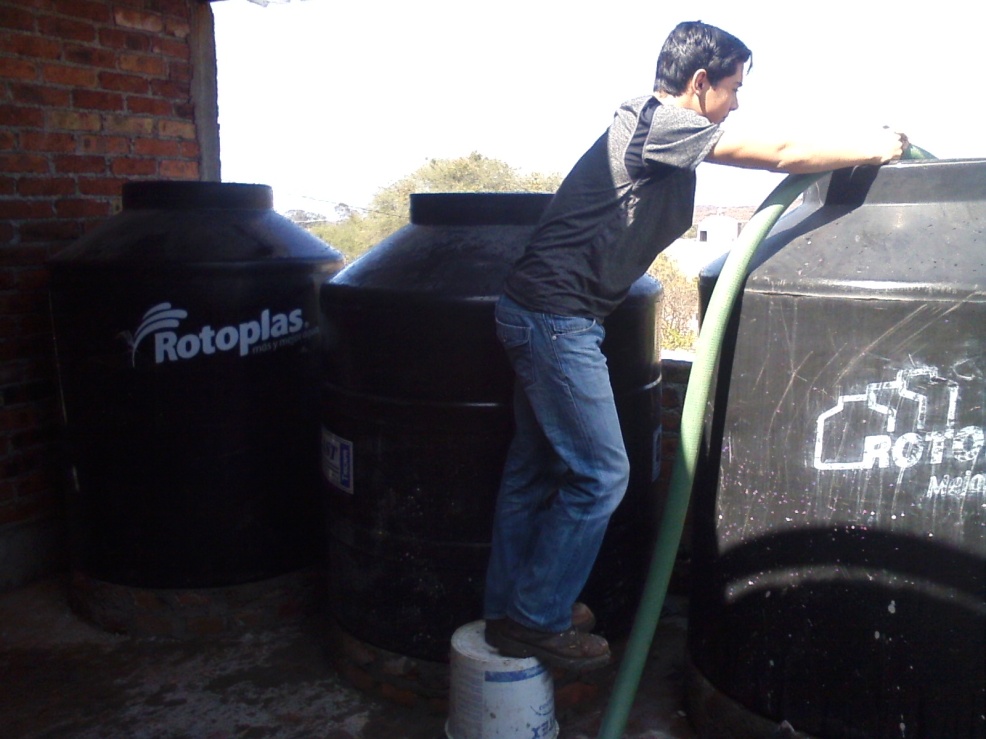 Now that there was a bit more space, we purchased 2 new 1100 liter tinacos (water storage containers).  My husband made bases for them with bits of brick.  He connected them to the copper pipes that lead to our downstairs bathroom.  Then, he connected a pipe from the roof to catch falling rainwater in the rainy season.

This added 2200 liters to our overall water storage capacity bringing our total to about 8000 liters with the first tinaco (water storage container) and ajibe (dry well).  A full order of water is 10,000 liters.  So now we can order a full truck and share with my father-in-law or with B to complete the order.

As you can see, we do just fine in La Yacata in regards to water conservation and would be able to survive longer in the event of drought because of that, even with water hard to come by. Amazingly enough, drought allows for some interesting phenomenon here in Mexico. In 2015, drought caused the water level to drop 82 feet in the Nezahualcoyotl reservoir, revealing the ruins of a 16th-century colonial church, Temple of Santiago. Who knows what other things might be found?

Would you like to learn more about surviving in Mexico?