Uriangato, the neighboring town that also believes itself to be a city, has an incredible community festival in September to honor their patron saint, Michael the Archangel. It begins on September 19 and is followed by 8 days of activities, finishing with an event called La Octava Noche on September 29.

From September 19 to September 28, each household lights a small bonfire with ocote wood (a type of pine native to Mexico) in front of their homes each night. These fires are called candiles literally translated as lightings as they are said to light the path of San Miguel Arcangel during this novena (9 prayer days). 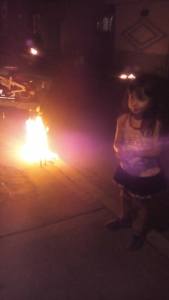 I have to say that the first time I witnessed this event, I was startled. It’s quite a sight, fire after fire, street after street. Of course, it’s origin is prehispanic.

From what I understand, this local tradition was associated with the god Curicaueri, whose name in Purepecha means great fire, and who was credited with the foundation of the state of Michoacan. (Uriangato is a mere hop, skip and jump from the present day border of Michoacan.) Curicaueri was considered the oldest of the gods and was honored by the lighting of bonfires with ocote wood.  Some of this long ago origin remains in the form of indigenous dancers that perform during the events.

There are peregrinaciones (pilgrimages) over several days usually in the form of parades made up of local civic groups.  The parade route takes the pilgrims to the Parroquia de San Miguel Arcángel, the main Catholic church in Uriangato. 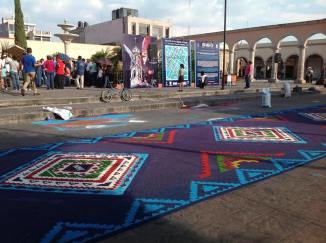 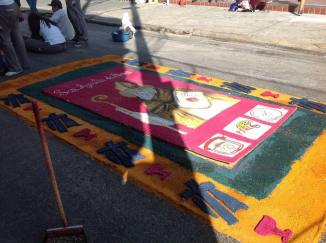 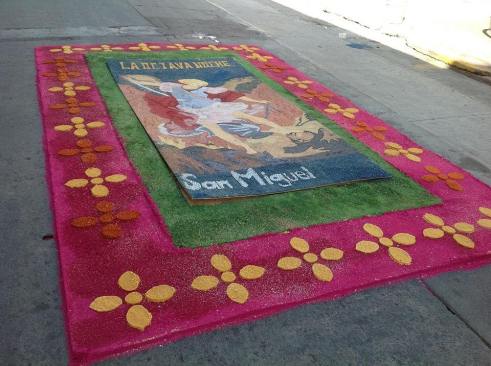 The other major event associated with this festival is the creation of tapetes, floor mats. These are labourously created with colored sawdust, seeds, and flowers along the roads in Uriangato. They usually take the form of a variety of Catholic images and are tread upon by the passage of the image of Michael the Archangel on October 6, known as La Octava Noche (the 8th prayer day in the novena). The tapete tradition is said to have begun in 1966 and each year becomes more and more elaborate.

The custom to take out the image of San Miguel and walk through the town at night, in a similar fashion to El Senor de Esquipulas in Moroleon, began after the Spanish conquest. It seems that only the Independence War and the Cristero War kept the procession from well, proceeding. It starts and ends, naturally enough, at La Parroquia de San Miguel Arcángel and covers an area about 5 km long.

The image is carried by different groups of volunteers with rest and prayer stations found along the route. This year, the image has been covered in protective glass, which better protects the 50 ornate vestments from the elements.

Here are some of the outfits. 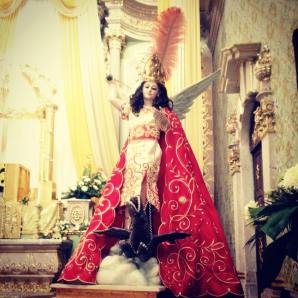 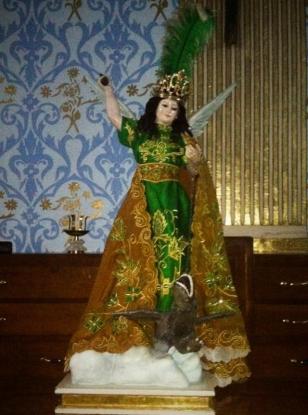 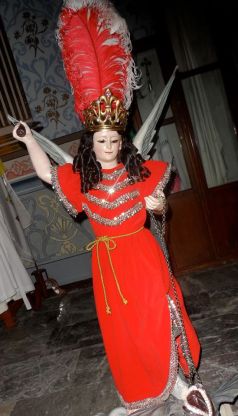 It really is a unique festival and should you happen this way during the holy celebration, it is definitely worth checking out.