Chocolate, from the Nahuatl word xocolatl meaning bitter water, is a gift from the gods.

Legend has it that the god Quetzalcoatl stole and gave the plant that provided a special drink meant only for the gods to his chosen people, the Toltecs. He asked Tlaloc, the rain god, to water this plant and Xochiquetzal, the goddess of fertility and vegetation, to tend to it. Quetzalcoatl picked the pods, roasted the kernels and taught the Toltec women to grind it to a fine powder. The women mixed it with water and whipped it to a bitter, frothy drink called chocolatl. Such was its sacredness, it could only be enjoyed by the priests and royalty.

When the gods discovered Quetzalcoatl’s theft, they were angry and plotted the destruction of Quetzalcoatl and his people. Quetzalcoatl’s enemy Tezcatlipoca came to earth on a spider’s thread and disguised himself as a pulque vendor. He came across a worried Quetzalcoatl and offered him the drink of happiness, the fermented agave drink. Quetzalcoatl drank until he was drunk. He did the happy, happy joy dance outside his temple. His people didn’t know what to think of his strange antics and lost respect for their god. Eventually, Quetzalcoatl passed out. (See Maguey)

The next morning, Quetzalcoatl woke up with a heavenly hangover. When he realized that his people had abandoned him, he left, heading towards the evening star. He saw that the gods had transformed the chocolatl plant into the agave plant which had intoxicated him. He walked all the way to the sea. Just before he left the shore, he planted the seed that he held in his hand, the seed that he had stolen from the gods. This seed became the cacao plant and the last gift Quetzalcoatl gave to his people.

Or so the story goes.

Blood, maize, and cacao play a hand in the creation of mankind in the story of Ixcacao, a Mayan fertility goddess.

Cacao beans ground to chocolate can be traced back to the Olmec civilization, about 1000 BCE. As the story above illustrates, chocolate was considered just sacred as maize. Mayan artifacts often picture maize and cacao gods together. During rituals that involved the cacao gods, priests would lance their earlobes and cover the cacao with their blood as a tribute to the gods. 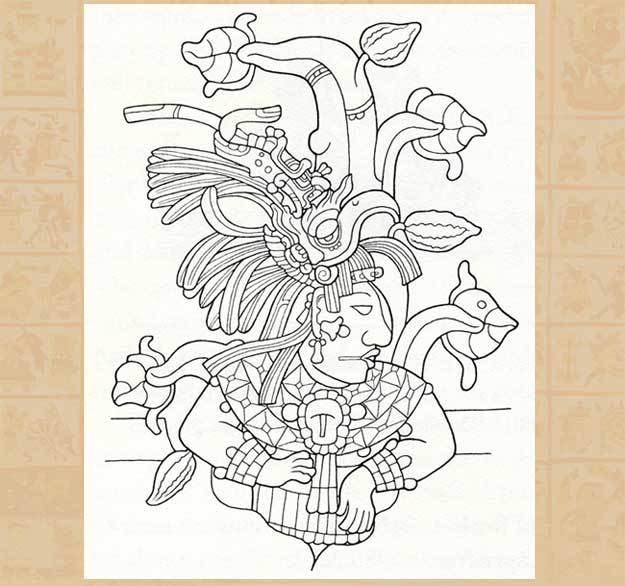 This is a representation found on the sarcophagus of an 8th-century Mayan ruler, Pakal of Palenque.  It shows Pakal’s mother, Lady Sak K’uk being reborn as a cacao tree.

Even the trees themselves were considered sacred bridges between heaven and earth. In especially holy circumstances, a deceased ruler might even be reborn as a cacao tree.

Cacao was also an important part of the marriage ritual among the Mayan. A man who wished to marry would invite his intended bride’s father to his home. He would serve his future father-in-law a hot chocolate beverage as they discussed the marriage arrangement. The bride price and dowry were often paid in cacao beans as well. 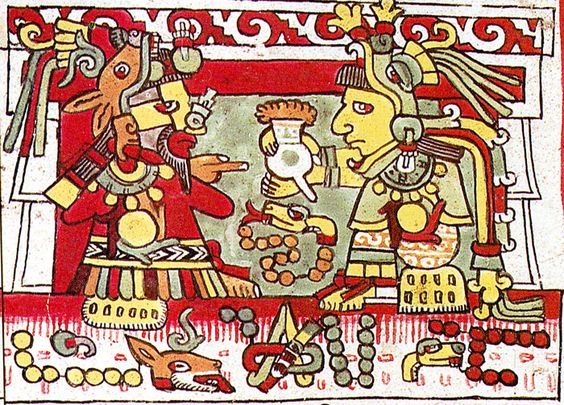 The wedding of Lord 8 Deer Jaguar Claw and Lady 13 Serpent as pictured in the Nuttall Codex.  The bride has poured and served a cup of chocolate to complete the marriage ritual.

The Aztecs collected their tributes from conquered groups in the form of cacao and often used it as a currency. So valuable was the cacao, that one hundred beans could buy a canoe full of fresh water or a turkey hen.

The rain god Chac and the moon goddess IxChel exchanging cacao as depicted in the Madrid Codex.

During rituals to appease Quetzalcoatl, the Aztecs would give the intended sacrifice a gourd full of chocolate mixed with the blood of the previous victim to calm their nerves. Another, less icky drink, made with chocolate called chilate, was believed to give the drinker strength, and thus included in soldiers’ rations, and to have aphrodisiac properties.

The Aztec ruler Moctezuma II, as royalty, often enjoyed the sacred drink. Bernal Diaz del Castillo, a foot soldier with Hernan Cortes, wrote his observations “From time to time they served him [Montezuma] in cups of pure gold a certain drink made from cacao. It was said that it gave one power over women, but this I never saw. I did see them bring in more than fifty large pitchers of cacao with froth in it, and he drank some of it, the women serving with great reverence.”

The Spaniards weren’t overly fond of the frothy, bitter drink. Jose de Acosta described it as

“Loathsome to such as are not acquainted with it, having a scum or froth that is very unpleasant taste. Yet it is a drink very much esteemed among the Indians, where with they feast noble men who pass through their country. The Spaniards, both men and women that are accustomed to the country are very greedy of this Chocolate. They say they make diverse sorts of it, some hot, some cold, and some temperate, and put therein much of that “chili”; yea, they make paste thereof, the which they say is good for the stomach and against the catarrh.”

An Aztec woman pouring chocolate to make it frothy as pictured in the Tudela Codex.  The Aztecs drank their chocolate beverage cold.

Remember, whatever recipe you use, the best chocolate drink is made in a clay olla (pot), mixed with a molinillo, and served in a clay cup.

Chocolate also has its place in Mexican dichos (sayings). After giving birth, a woman “merece el chocolate” (deserves chocolate). It is customary for a new mother to receive a cup of hot chocolate every morning for 40 days to aid in recovery. (See Candlemas) (See Three Kings Day)

One of the most famous Mexican sayings is “estar como agua para chocolate.” Literally, it means to be like water used in preparing chocolate which is HOT. Passionate, angry, boiling over with emotions.

Cacao is used as a base for other traditional Mexican delights, like mole.  Stay tuned for more information!