Did you know that the Maya didn’t make tortillas before 900 CE? The reason archeologists believe the tortilla is a more recent addition to their diet is that no comal has ever been recovered at any excavated sites of periods before 900 CE. So what did the Maya eat? TAMALES!

Tameles were foodstuff in the Aztec and Maya civilizations as far back as 7000 BC. The Maya even had a hieroglyph for tamales. Since a tamal is individually wrapped, it was the perfect portable food. They were often carried by warriors, hunters and travelers as a sort of meal on the go. Tamales could be reheated over the fire or eaten cold.

A tamal (notice there is not final “e” at the end of the word in singular) is made of masa (corn dough) steamed in a corn husk or banana leaf. The wrapping is not eaten, but we always save our wrappings for the goats. It can be filled with pretty much anything, meat, cheese, fruit, vegetables, chili etc.

The Aztec had their favorite fillings. Tamales were often filled with turkey, flamingo, frog, axolotl (salamander), pocket gopher, rabbit, fish, turkey eggs, honey, fruit, squash or beans. Festival tamales were a cut above the rest. Tamales wrapped with amaranth leaves stuffed with greens and served with shrimp sauce were made for the Lord of Fire Xiuhtecuhtli. Tamales filled with beans and chilies were made in honor of the god “Smoking Mirror” Tezcatlipoca. The “Old God” Huehueteotl was honored with shrimp and chili tamales.

Tamales at festivals were passed around in baskets and always held in the left hand. Bad luck would come if you eat a tamal that had stuck to a cooking pot. Aztec women were forbidden to eat these tamales. A pregnant woman who ate a stuck tamal might have pregnancy complications, the child would cling to her womb just like the tamal clung to the side of the pot.

The Maya often had tamales filled with toasted squash seeds, squash flowers, beans, iguana, turkey, deer, and fish. The heart of the deer was used to make tamales for special festivals. They also had unique, elaborate tamales, rolled together and filled together like a jelly-roll, displaying spiral designs when cut. Often the tamales were wrapped in chaya instead of banana leaves or corn husks. 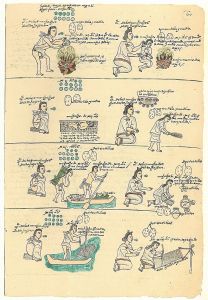 Traditionally, food preparation was the domain of women. The ties began at birth when the umbilical cords of infant girls were buried under the grinding stone, symbolizing their future occupation. Girls learned at the knees of their mothers from a very young age so that by the age of 13, girls were responsible for grinding maize and food preparation. (See Codex Mendoza)

Women, young and old, participated in the extended tamal preparation in what was called a tamalada.

In Historia general de las cosas de la Nueva España, Bernardino de Sahagún described what he observed in a tamalada in preparation for a festivity.

“Among the ashes was the labor of the old women. They made tamales using dried grains of maize; …they made tamales of meat. Some cooked tamales in an olla. Some washed the maize grains which had been cooked in lime. Some carried and drew water, or poured it. Some broke up, ground, and pulverized cacao beans. Some mixed cooked maize with chocolate. Some cooked stews, or roasted chiles—different kinds of chiles. All night they remained there. Vigil was kept. They kept watch. There was constant awaiting of the light. They sat holding vigil and chattering.”

So how does one make tamales?

The beginning steps to preparing the masa are identical to making tortillas. (See Tortillas)

First, the dried corn is removed from the cob. 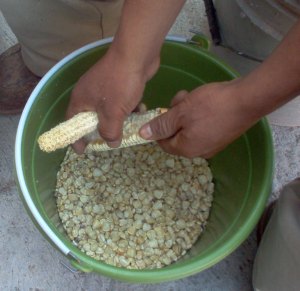 Removing the corn from the cob.

The corn is then sifted to remove stones and dirt, then poured high so that the wind takes any chaff left over. Next corn is then boiled until soft with lime and the husks removed.

Pouring to remove the chaff.

This is called nixtamalization.

The softened and peeled corn is then milled. Many tortillerias offer this service as hand grinding with a metate takes much longer. The resulting doughy mix is called masa. 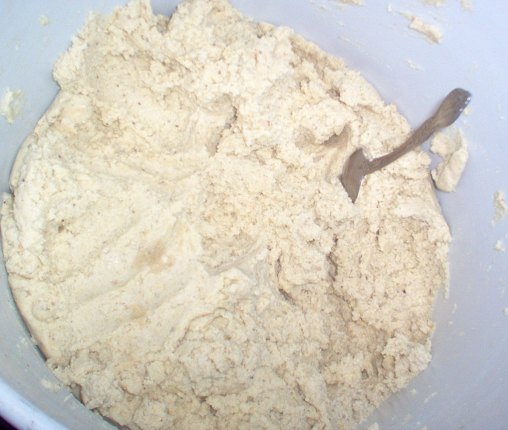 Add melted manteca (lard) or vegetable oil to the masa and mix it until the dough is pasty.

Corn husks can be bought already dried and flattened.

In addition to the masa (dough), the wrappings need to be prepared. If you are using dried corn husks, soak them in hot water until they are pliable. This could take up to 30 minutes. Drain and then pat dry.

Blend the boiled and deseeded chiles.

Strain the chiles into the meat. 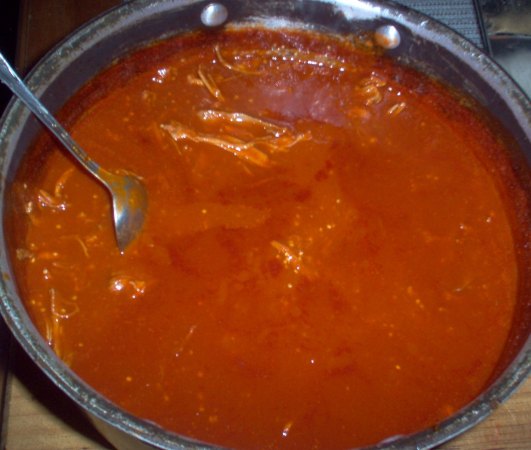 Add the tomato and tomatilla sauce as well.

Prepare your filling. For El Dia de Candalaria, we made pork tamales with chile.

Fold up and stand on end. 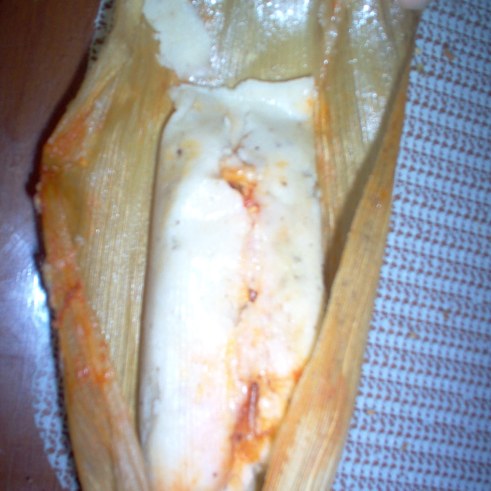 In order to form the tamal, take a softened corn husk and spread the masa into a flat rectangle shape. Add the filling in the middle. Roll the husk and fold up it up at the end. Set the tamal upright in a steamer pot with 1 to 2 inches of water in the bottom. Cover and steam on medium-low heat until the dough pulls away from the corn husk. Enjoy!

Only one person should meter mano (put his/her hand in) to load the tamales into the pot, otherwise, the tamales will spoil, or so is the common belief.

The zacahuil tamal, a specialty still made by the Huastecan people, is 3 feet long, weighs about 150 pounds and uses most of the leaves of a banana tree to wrap. It is baked in an oven or in the ground rather than steamed.

As with any other integral part of life, there are several expressions using tamal/tamales found in Mexican Spanish.

The idea of infidelity comes into play again with the expression “Hacer de chivo los tamales” which literally means making tamales out of goat but means you are about to be betrayed by or betray your romantic partner.

Another is “El que obra mal, se le pudre el tamal“, literally, he that works poorly, causes the tamal to go bad. In other words, what comes around, goes around.

Or how about this one–“Para todo mal, un tamal. Para todo bien, tambien.” For everything bad, console yourself with a tamal. For everything good, celebrate with a tamal. With the variety of tamales available, there’s a flavor for every occasion. I’ve also heard this expression with mezcal replacing tamal. That will work too!

And one more–“El que nace pa’ tamal, del cielo le caen las hojas” He that was born to make tamales, the leaves fall from the sky. Once you’ve found your destiny, everything falls into place.

Bet you didn’t know the tamal was so profound, did you?

The Write Tribe Festival of Words #5