November is harvest month in central México. The corn has been stacked to dry, and the squash piled high. The winter crop, garbanzo(chickpeas), has been planted and if the rains hold off, by now, it should be about 3 inches high.

But the harvesting isn’t done. Maiz sorgo is also ready to bring in. This grain plant is a favorite of chickens and pigs. (See Miss Piggy didn’t bring home the bacon). It isn’t a crop we plant since humans don’t typically eat it, so we have to obtain it through other means.

Therefore last Sunday, we headed towards Cerano to see what we could see. And lo and behold, there was the maquina (thresher) mowing through the fields of maiz sorgo. My husband excitedly pulled off the road and leaped out with his costales (grain sacks) and machete. 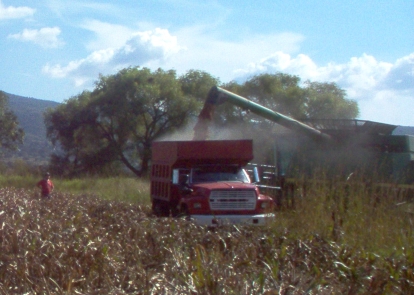 He asked the people in the fields if he could apepinar (glean). It is a courtesy to ask, but nearly never is it denied. Gleaning, if you aren’t already familiar with the term, consists of collecting the fallen crops that la maquina (thresher) didn’t get. It isn’t difficult, but it is tiring going up and down the rows looking for leftovers. The trick is knowing where the thresher is going next to be one of the first to stake your claim.

We followed la maquina (thresher) for a few hours and came home with 4-5 costales (sacks) of maiz sorgo. Not too shabby, but certainly not enough to last all winter. 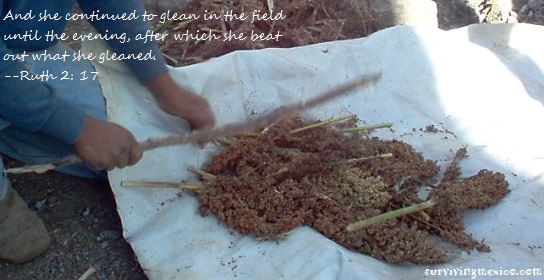 The next step is to thresh the grain heads so that the little seeds can be stored better. This involves some heavy stick beating. After that, we give the chaff to the goats and scoop the seeds into a barrel. If there is enough, we take the seeds to the molinero (miller) and have it ground to dust. If there isn’t, we feed it as is to the chickens as part of their homemade “scratch” (grain mixture).

Being a gatherer isn’t such an onerous life as you might think and an important part of our harvest.

One response to “Alternative Farming–Gleaning”