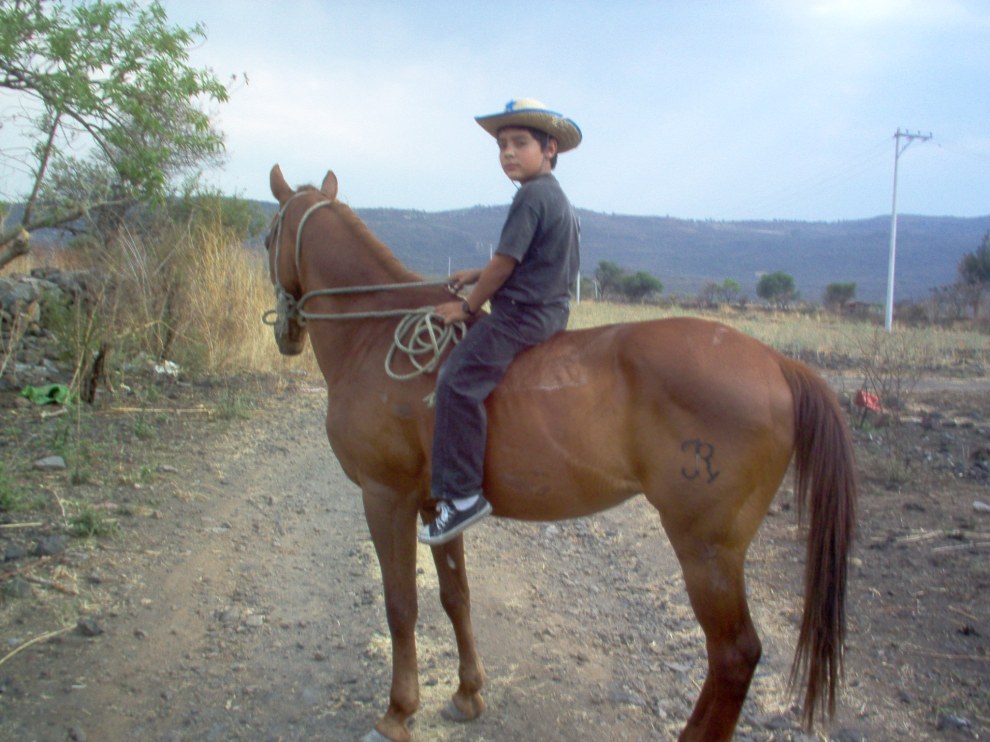 My husband got it into his head awhile ago that he must have a horse. After all, as a youth in Cerano, he was never without his horse. Not long into his search, he found one that the owner was willing to barter for 5 goats and 3000 pesos. Deal done lickety split. Red was a quiet gelding, not much trouble at all at the beginning. He altered his pace to accommodate his rider. For my husband, he did handsprings and danced. For my son, slow and steady up and down the road. And for me, little a pony trot around the block. Everybody was pleased.

However, owning a horse was not without problems. First, there were mounting expenses. A horse needed a bridle, reins, a saddle and new shoes.

My husband on Red.

Then having acquired a horse, my husband went in search of his lost youth. This caused some problems because he was now a married man with responsibilities, not a charro prancing about for the young ladies to admire. These solitary rides irked my son and I since he left us to do the other chores around the house and we never got a chance to ride.

My husband’s solution to this second problem was to get a second horse. Without ready cash, the problem was how. He heard about herds of wild horses in Los Amoles, and he and my son spent more than a week on daily treks looking for them. They did stumble across a small herd one day, after crossing a lagoon on the motorcycle, water up to their waists, but couldn’t get near enough to catch one, although they felt that the glimpse was well worth the adventure and the dip in the water.

A neighbor heard about my husband’s quest and took him to see an acquaintance who was selling his horse in Salvatierra. My husband was twitterpated with his first sight of Black Beauty. We didn’t have any money, but my husband scrounged and saved and sold his tools and the toolbox to come up with a deposit. That just goes to prove that anything can be bought on layaway. Two weeks later, Beauty was home and in season.

Our own Black Beauty.

And it couldn’t just be any stallion for Beauty. My husband went hither and yon and found one to his liking that also fit the budget. Stud fees vary on the quality of the stallion and the owner’s whim. But having obtained one, all the men in La Yacata came to watch the maquila (breeding). Then there were the endless discussions on whether the stallion ejaculated and whether Beauty was pregnant afterward. Honestly, not something I spend my afternoons discussing, but hey, whatever floats your boat I suppose.

So then there was the stud service fee, new shoes and, of course, a second saddle and bridle even though we hadn’t finished paying for the set for Red yet. At first, expenses did not include food as it was the rainy season and there was free grass aplenty for fodder. However, it’s a horse of another color during the dry season. Horses eat like, well, horses and now we had two.

But, to our delight, now with two horses, we could go riding as a family. My husband on Beauty, me on Red and my son changing out between us.

Riding about was not without perils. There are the low hanging branches of the thorny mesquite trees to look out for and hidden craters that may have been dug out ages ago for someone’s ajibe (dry well) that may cause a horse to stumble and throw the rider. Then the horse may decide that he or she is a racehorse and that turbo speed is called for to win this imaginary race and the rider (namely me) finds it hard to decelerate while ducking branches and hanging on for dear life.

My husband and son have a natural seat on horseback that I seem to lack. They slouch a bit and sit low in the saddle and actually look like they had been born to it. And I so wanted to look like an elegant English miss, complete with a blue velvet riding habit on the back of the horse. However, the horrible truth was that I looked as elegant as a frog on a log floating downstream. Oh well, I suppose someone had to eat the flies, and it might as well be me.

Red and the summer class. He had such a friendly disposition in the beginning.

The word caballero, which is translated as gentleman in English, literally means one who owns a horse. Horses were a status symbol, as only the wealthy could afford their upkeep. Regular folks made do with donkeys or mules. As we hardly qualify as wealthy, Red had to work to earn his keep. My husband worked with my father-in-law and son to till about an acre of land near our house to plant corn, both for our own larder and then later to feed the horses during the winter months when grass is hard to come by.

For a time, this worked out well. Then Red became persnickety. He didn’t want to plow. He reared up when I was on his back. He nearly kicked my son. We couldn’t figure out what got into him. My husband thought that he might have been improperly castrated and a neighboring mare in season was causing his bad behavior. So he had a neighbor sedate Red and check. Nope. That wasn’t the cause.

Then, the second theory was that he was too well fed and, therefore, didn’t want to work. It’s true that he filled out while living with us. His coat was not as shaggy but glowed. So what’s the solution for overfeeding? My husband tried tying Red to a tree in the afternoons so he couldn’t graze, but his ornery disposition didn’t improve.

So he was sold to B, my husband’s brother. B would ride hell bent for leather, up and down the ravined roads in La Yacata, late at night. I was sure he would be thrown and break his neck, but he didn’t. That lasted about 3 months, then Red disappeared. We have many theories, but no trace has been found.