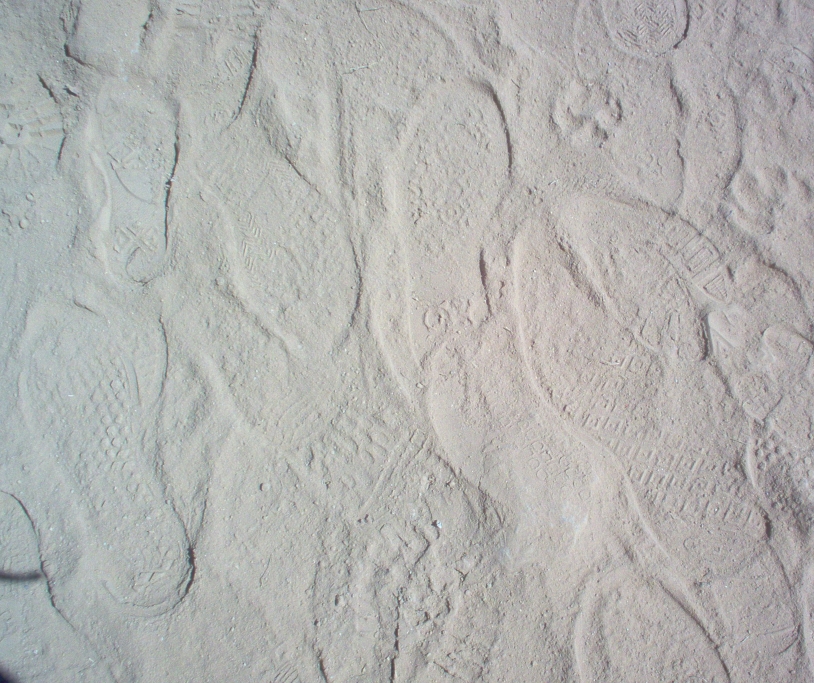 Footprints of those that make the pilgrimage to La Soledad to see La Virgen.

Well, there is quite a bit to cover with a grand title like that, but I’m going to keep it local, rather than national. México is a Catholic nation, as I’ve mentioned before, but each area has its own spin on things. There are some areas where the activities and rituals surrounding this holy season are a reaffirmation of faith both for participants and observers. Moroleón is not one of those areas. 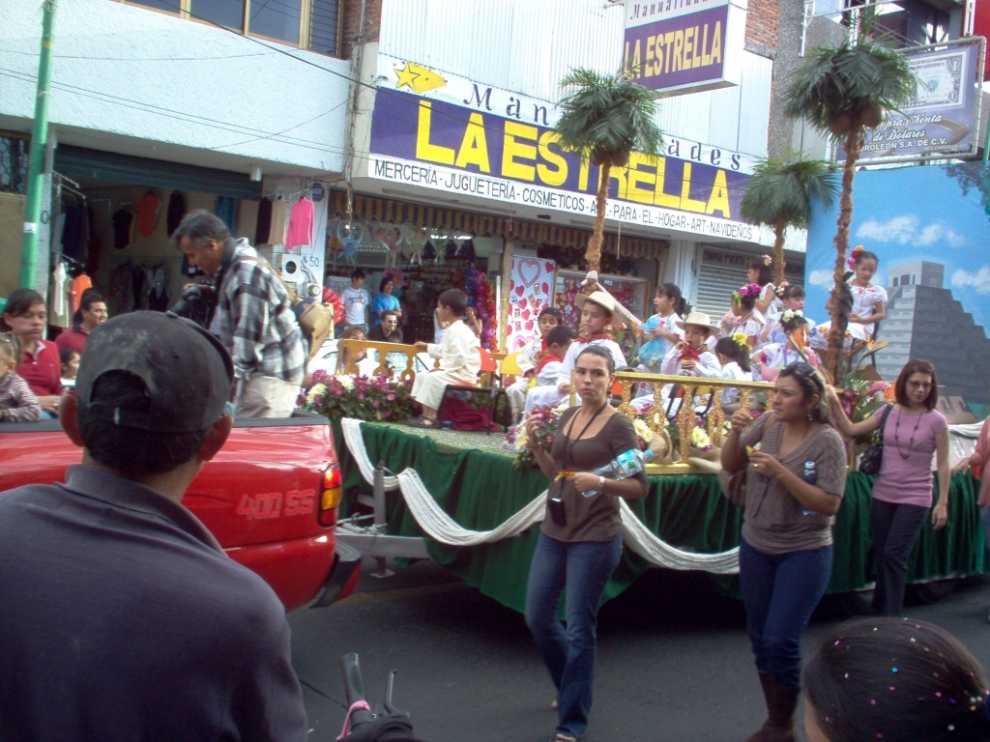 In Moroleón, the beginning of the season of fasting and supplication begins with a parade. A kindergarten parade. In February, all the private kindergartens sponsor a float and dress their students in costumes representative to different regions or countries where Carnival is celebrated. Of course, having been a teacher in various kindergartens, I have had the dubious privilege of marching beside the float and keeping little guys from jumping out. It’s never fun for me, although the kids like throwing candies to the crowds. It’s a long walk around town, I get confetti in areas where confetti never should be found, and it’s often cold and blustery. After all, it is February.

Then there is the egg throwing. In Moroleón, after the kindergarten carnival parade, there is egg throwing. They are supposed to be blown eggs filled with confetti, but sure enough, there is a significant number of real eggs tossed. I have asked and asked, but no one can explain to me the significance of the egg throwing or its origin. Perhaps it is a symbol of waste, I don’t know. Regardless, we stay away from downtown as being pelted with either confetti-filled eggs, or real ones is low on the list of activities we’d like to do in the evening.

Then comes Ash Wednesday, the official beginning of Cuaresma (Lent). In the Catholic religion, the traditional purpose of Lent is the preparation of the believer for Holy Week through prayer, penance, repentance, almsgiving and self-denial.

Ash Wednesday is marked by misa (mass) and the receiving of an ash and oil cross on the forehead in a reminder that “from dust we are and to dust we shall return.” As nearly everyone in México is Catholic, the church is overrun with devotees on holy days. They have become more efficient in their proceedings by using a rubber stamp (dipped in ink mixed with ash and holy oil) to mark the foreheads of the penitent.

The 40 days of Lent are to be a time of prayer and fasting in remembrance of the 40 days that Christ fasted in the wilderness. However, the fasting need not be extreme, at least here. Only meat is to be given up on Ash Wednesday and Fridays during Lent. All the carnicerias (butchers) are closed on these days. Fortunately, meat still may be bought at the Bodega Aurelia (a branch of Wal-mart) for those that are not Catholic or vegetarian. Fish, of course, is acceptable either day, as it is not considered particularly satisfying.

As one of the traditional practices in addition to prayer and fasting is the giving of alms, supposedly the meat that one would have customarily eaten on those days should be bought and given to someone in need, someone less well-off financially. However, I have yet to meet anyone in this area that does that. But that’s what I’m told.

Part of the drama, Christ carrying the cross.

The drama ends with the crucifixion of Christ.

Semana Santa (Holy Week) is celebrated throughout México with reenactments of the betrayal, trial, and crucifixion of Jesus Christ. It’s really a good show. Barabas actually goes into shops that are open (as all stores are supposed to be closed anyway) and steals items. I even saw him take an ice cream cone from a little child watching the drama. The final crucifixion is done on a vacant lot on the edge of town. In Moroleón, Jesus and the 2 thieves are only tied up on the crosses, not nailed as they are in other parts of México. There is also no flagellation of any kind, Moroleón being a moderate sort of town.

During Cuaresma, suffering is the key, so traditionally one is to give up something dear for the 40 day period as a sacrifice in addition to meat. If your sacrifice holds the entire period, you may make a pilgrimage and ask a favor from the Virgin. The choice of pilgrimage place and the difficulty is dependent on the petition. For instance, when my mother-in-law was dying, her husband promised that if she survived, he would make a pilgrimage during Semana Santa (Holy Week) to La Soledad descalzo (barefoot). As she didn’t survive her injuries, the promise is not enforceable, and my father-in-law did not make his pilgrimage.

We, however, did. During Semana Santa (Holy Week), most specifically Maundy Thursday, Good Friday, and Sábado de Gloria (Holy Saturday), those in need of health-related favors make the pilgrimage to La Soledad, a little town outside Moroleón and there deliver their petitions to the Virgen de la Soledad, Madre de todos los enfermos. (Virgin of Comfort, Mother of the Ill)

This shrine marks the entrance to the path that leads to La Soledad. As with all shrines of La Virgen, it supposedly appeared miraculously.

The transitos (traffic cops) stand on the major roads and slow traffic so that the hundreds of men, women, and children who make the pilgrimage from Moroleón and Uriangato and other communities can cross. From La Yacata, La Soledad is not terribly far. Through the dry creek bed and past the basurera (dump) the distance is about 3 miles as the crow flies. So Saturday morning, I donned my big floppy hat and long sleeve shirt (not taking any chances on yet another severe sunburn), and we were off.

We were late getting started since we had to attend to the animals before we left and we met more returning from the pilgrimage than going in the same direction. But we arrived in good time, after maybe 2 hours of walking. 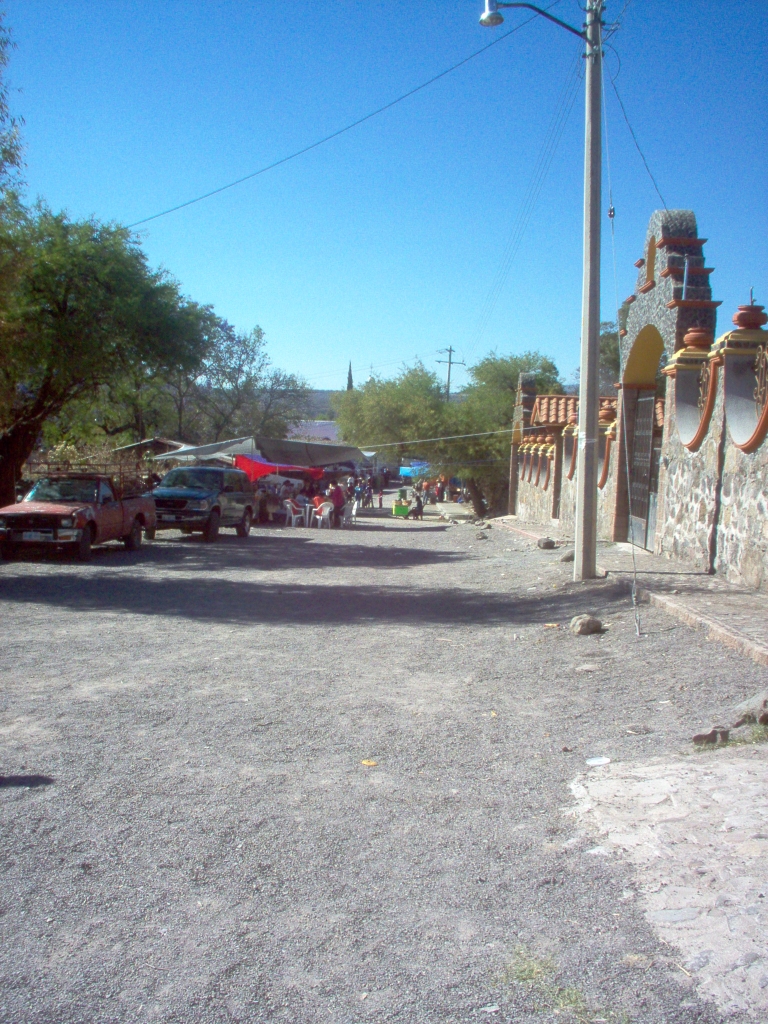 Refreshments for the weary walkers are available. 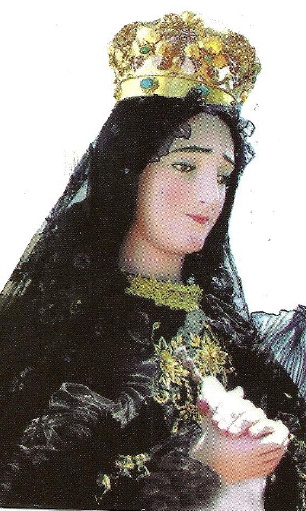 The shrine is not especially big, perhaps holding 20-30 people. Inside is a life-size statue of the Virgin Maria, dressed in mourning black and surrounded by flowers.

Well, we took a quick look, didn’t stay the entire mass since we weren’t there to make any petitions, had some pan (bread) and horchata (rice milk), rested a bit in the shade, then started back. However, perhaps we should have made some sort of offering. We were under the weather the next three days.

There is also a procession of silence at night, but we didn’t stay for that.

Domingo de la Resureción, (Easter Sunday) is again observed with a mass and traditionally is a family day. However, this year, we noticed that several small towns used the opportunity to hold jaripeos (rodeos) later after misa (mass). Monday is typically a day off here, with the work week being Tuesday through 3/4 day on Saturday, so I’m sure the revelers had time to recover from the jaripeo (rodeo) overindulgence (the main attraction at the jaripeo is beer, beer, and more beer).

Schools are closed the week following Semana Santa, and many families use these days to go to the beach or other vacation areas. We took the week to recover from the virus that we caught and are now gearing up for back to school.