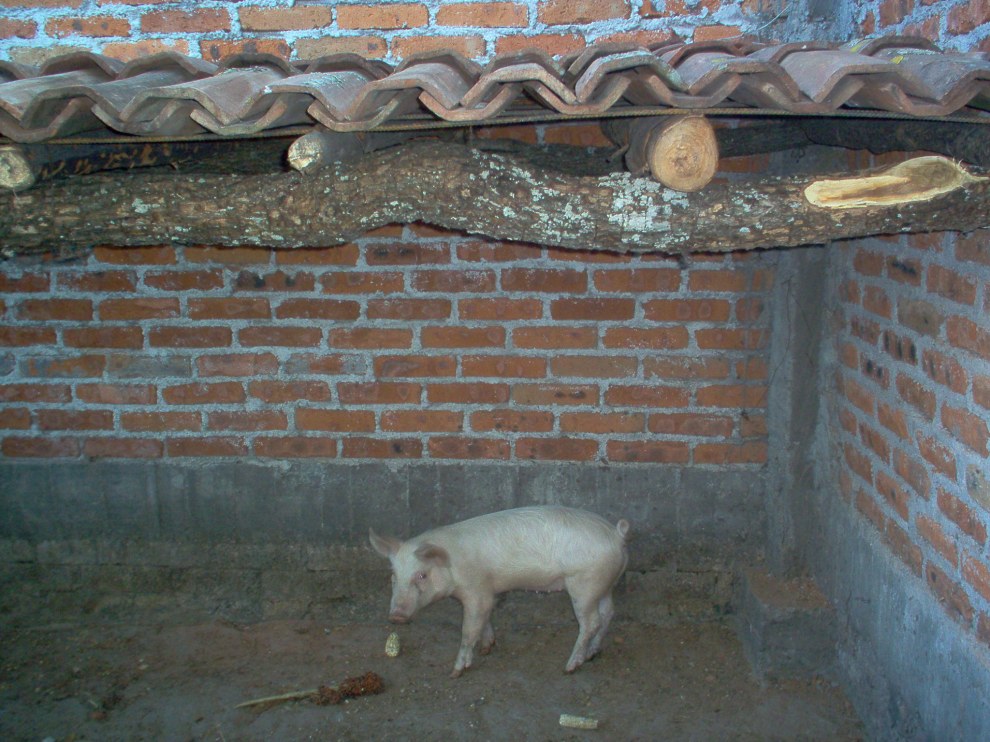 Allow me to introduce Miss Piggy. The stalk with the red grain on it is called maiz sorgo.

This month, my husband is pig-sitting. Yep, that’s right. He has loaned out what was once Miss Piggy’s bungalow to someone who is building pig corrals in La Yacata. But I’m not happy about it.

First, this was to be supposedly a week or so home away from home for 3 piglets. But we are now pushing a month with our 8 piggy guests. Then management (us) was not providing the intercontinental breakfast with this service, nor the daily room cleaning. However, the owners are a bit lax with their service provisions, and the 8 little piggies are not so quiet with their protestations about a dirty room and late dinner.

And then there is the dinner itself. The owners bring the typical churros (pellet processed pig food) and then add a creative dish of raw chicken intestine. Every fly in La Yacata comes to dine. I objected strongly to this diet, but being a gringa what do I know? According to the owners, that’s the way it’s always done.

Now one of these little ladies has developed a prolapsed rectum due to diarrhea caused by this diet. It’s as awful as you might imagine, so I’m not posting any pictures of that. Even after I pointed out that they needed to provide a better quality food or the other 7 will suffer the same fate (there isn’t any cost-effective treatment and will end in her death), the response was that’s the way it’s always done.

And truth be told, it is. Last year I was all gung-ho to get a pig. We had a perfect little space in the back. Thus began the quest for Miss Piggy. We traveled hither and yon asking about at pig farms. We discovered that those who raised pigs for meat were raising sterilized animals. I didn’t want a sterilized animal, my vague piggy plan had lots of piglets in the picture. So we kept looking.

We went in search of breeders. Town after town, no luck. Some pig breeders had a litter ready to sell, but wouldn’t just sell us one. It was all 6 or none. Seems pigs were sold by weight to the bigger commercial companies that came once a week to the market. The pig breeder said he would get a better price if he had more pigs on the scale.

And the places these pigs were living. EEEWWWW! Now, I’m not exactly a city girl. We rented a house next to a pig farmer when I was a girl. But there was nothing to compare that large, open, clean-air pen with the corrals that these pigs lived in. The floors and walls were cement so that the pigs wouldn’t dig around in them. They were barely big enough for these enormous monsters to turn around in. And they were built at a slant so that their liquefied excrement would drain out of the corral and into an open drainage ditch which eventually connected to the sewer of the owner’s home. The idea was to grow the pigs as quickly and as mammothly as possible and then sell them to the carnicerias (meat markets) for carnitas (deep fried pork). So the feed these growers used was, yep, you guessed it, a combination of the pig processed feed (churros) and chicken intestine (for protein).

Eventually, we did find a pair of unsterilized piglets. I felt that one pig was enough to begin with, so we gave the little boy pig to my in-laws to take care of. Unfortunately, my mother-in-law didn’t take kindly to having another mouth to feed, and he became carnitas before he was even big enough to provide a mouthful of meat for each family member. 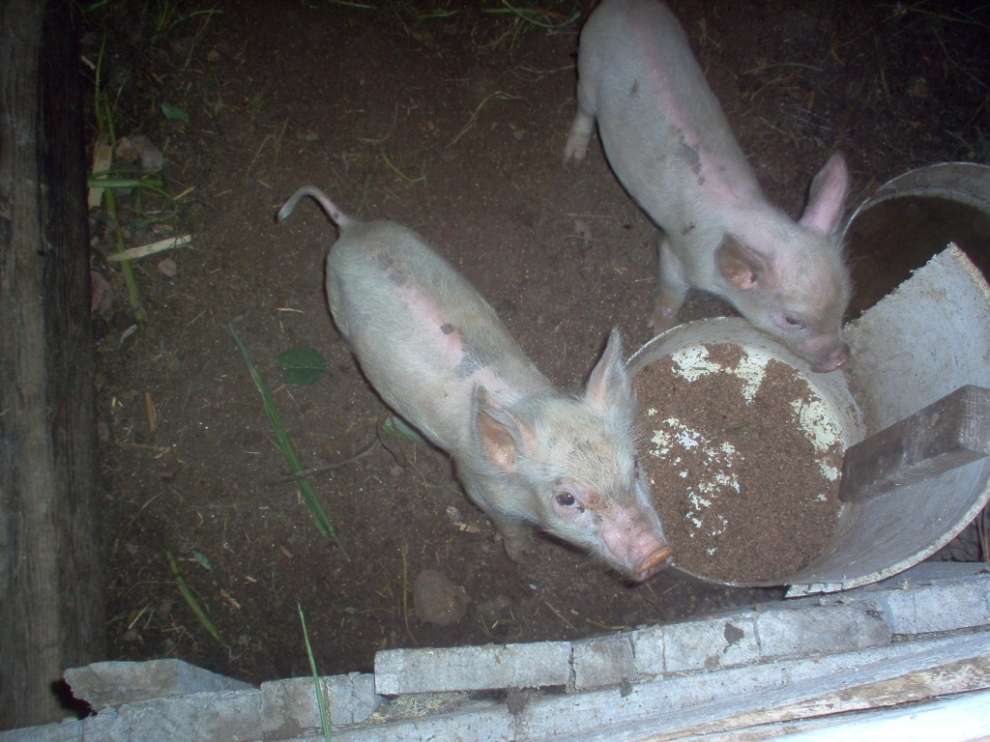 Waiting for the milk to go on their cereal of milled maiz sorgo. 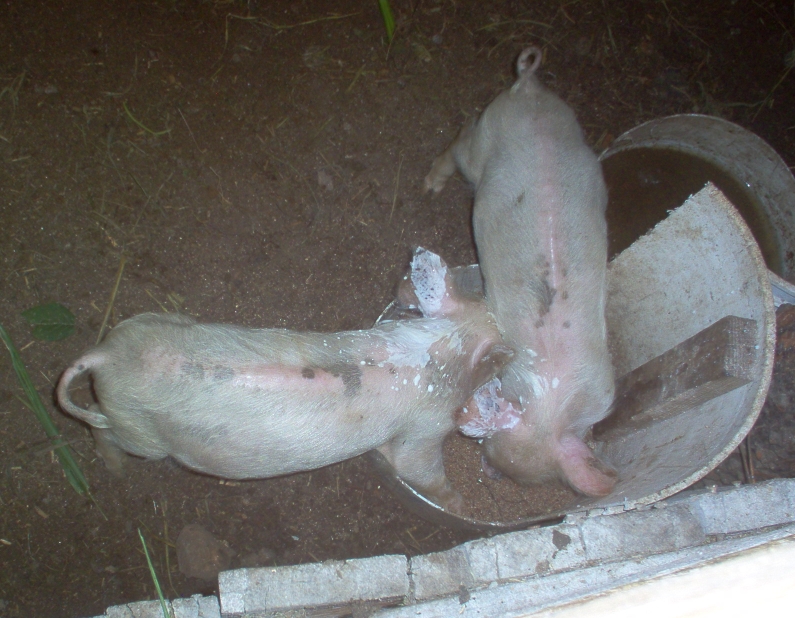 Yummy! Couldn’t even wait til we had the milk all poured before they started in!

But we kept Miss Piggy. (You need to know that we only give names to animals that we don’t plan on eating, helps to keep the psychological effect of eating one’s pets to a minimum.) She gobbled up the mixture of milled maiz sorgo (a red grain) and goat’s milk that was her main feed. Occasionally, just for variety, there were corn bits mixed in or a dash of alfalfa or this weedy sunflower looking plant that didn’t have a flower called gelite that she just absolutely loved.

She was quite the lady, kept her bungalow as clean as a whistle. She pooped in one corner, had her water in another, ate from a third, and slept in the final corner. She pranced about and greeted us happily. When we cleaned her pen, we gave her poop to the chickens, who found all sorts of overlooked treasures. As her diet was all natural, it was ickier to clean up the dog poop than hers.

I had some notion that we could train Miss Piggy to go out with the goats and dig to her heart’s content in the fallow fields, but once established in her bungalow, Miss Piggy had no desire to roam. She wouldn’t come out for all the coaxing in the world.

However, one day when my husband was out of town, and I was late with dinner, she managed to get out and eat all our young fruit trees down to nubs. When I got home, she was back in her pen, the only sign she had been wandering about were tiny hoof prints all about the muddy back yard and of course, no trees.

My husband kept saying she wasn’t growing as fast as she should. I suppose compared to the behemoth porkers in those fattening pens, she didn’t grow as big or as fast. But she didn’t smell, she didn’t have an excess fly infestation, she didn’t have any health problems and I was happy with her growth.

But came the day when her cost outweighed her benefits, and she had to be sold. An Amish leprechaun with a silver hoop earring came one day to take her to market. And that was that.