Cocoa, a miniature puppy, who is not destined to become a rabbit eater as Mr. Fluffy outweighs him by 5 pounds.

Meet Cocoa, the most recent find in a long line of puppies that made its way to our doorstep. As La Yacata is just past the town limits, it seems we are considered a dumping ground for unwanted pets, mostly puppies, but some kittens as well. 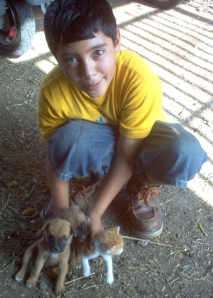 Frank and Jesse died of internal parasites. Tiger escaped the compound and was trampled by the neighbor’s cow.

We haven’t had much success in keeping any of these strays, but we always provide a safe haven for the duration of their stay. 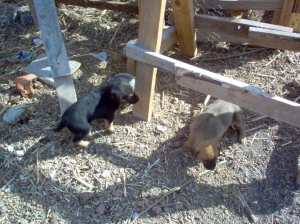 Katie on the left got caught between the double row of tires on a truck.

Some puppies become dogs who eat our rabbits, chickens, ducks or quail. The first occasion necessitates finding a new home for the dog, for once it has developed a taste for our other livestock, it will stop at nothing to make its own lunch. 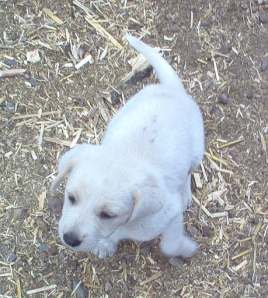 Snowy became a duck eater and had to be sent elsewhere.

Chispas found us with his tail already mocha (cut off). He later became a chicken eater and had to be rezoned. 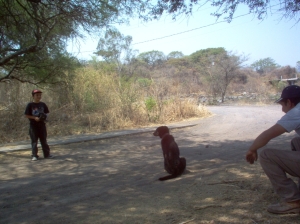 Playing ball with Bear, who became a chicken eater and had to find a new home.

Zoe had a partiality for rabbits and had to move elsewhere.

Then there are the puppies that have been poisoned. We try our best to keep our dogs in our enclosed area, however just a minute of inattention while bringing the goats in, sometimes results in a fatality. The elderly farmer who lives that the entrance of La Yacata, seems to think it his God-given duty to exterminate the animals of La Yacata. He leaves dead chickens laced with rat poison about and of course, what dog can pass that by without a taste. 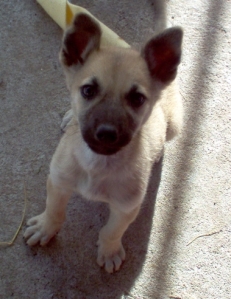 Some of our puppy finds are just too little to survive without their mother.  The mother having been poisoned or shot, we sometimes find a passel of puppies howling in hunger and do our best to keep them alive on goat’s milk.

This one didn’t make it either.

On occasion, we also find grown dogs in La Yacata.  Unfortunately, these are often the fighting dogs (typically pit bulls) and are in such a state of abuse and neglect, covered in open infected sores, eyes oozing with disease that we can not, in good conscience bring them into our home to infect the other animals.

Sometimes, mama dogs are seen wandering about in La Yacata. Again, we don’t take them into our house because obviously, they have puppies somewhere nearby. For these poor scrawny mama dogs, we leave water and bones outside. They often return the favor by protecting the house from nighttime prowlers and coyotes.

With the demise or relocation of each dog, we swear we won’t take in another one. It’s just too sad to love and lose again and again. However, before too long, another puppy finds its way to our door, and we have no choice but to risk it again.