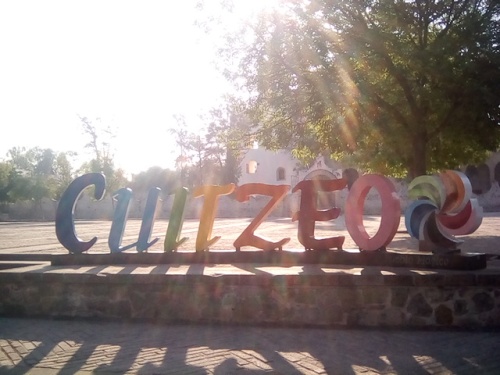 Last Sunday I had the full day. No classes, no articles to write. A clear schedule. So we went driving around. We decided that we’d go to some Pueblos Mágicos since everybody and their brother were at the beach for Semana Santa. 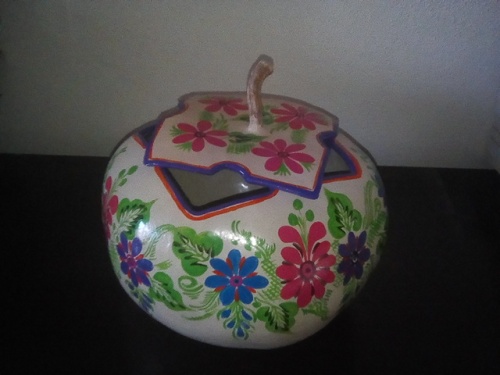 We stopped in Cuitzeo first and I found this gorgeous hand-painted gourd. I had to have it! The artist had a few other things that were amazingly painted as well. I wanted a wicker basket since Cuitzeo is known for its reed basket weaving, but didn’t find one that I liked today. 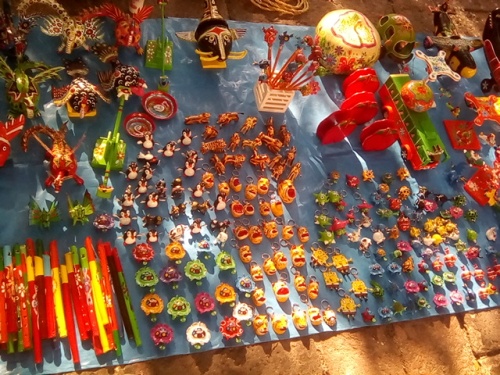 Then we went the round-about-way past Huandacareo. Of course, all the balnearios were packed, but we went to the centro. There was an artist set up in front of the church selling some lovely oil painted boxes and paintings, but I had spent too much on the gourd and didn’t have enough money for anything else.

We found a quiet beach area shaded by mesquite that would be worth a second visit for a picnic lunch. It was deserted at the moment, but the man with a herd of goats said by afternoon it would be packed. Semana Santa and all. 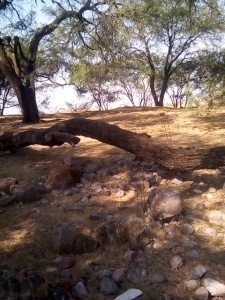 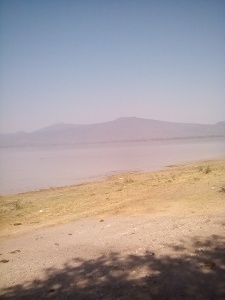 We dropped off my gourd and two plants I bought at home then headed in the opposite direction, Yuriria. As expected, the centro was a ghost town though hopeful artenesia vendors had set up in front of the monastery. They had some lovely souvenirs for sale including wooden lanchas (boats). Yuriria has a crater lake that includes boat rides. We went to check that out as well.

By this time my phone had died so I didn’t get any pictures, but the lake was a quiet, cool drive. It seems like the boats weren’t running, probably because the lake was so low. We are still in the dry season here. We’ll have to check it out after the rains start. There were several quaint restaurants and a recently installed walkway as well.

At the other half-circle around the lake, there was another park. A bit dry and dusty for current use, but probably just lovely in June. Our backsides started to ache at this point, so we decided to head home. We’ll be back though!

While we often travel for a day trip to Cerano, once in awhile we also head to Yuriria, the bigger town that Cerano is a municipality of. 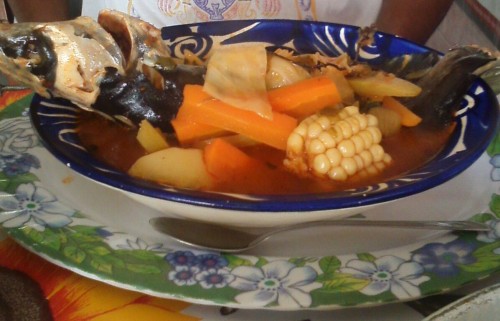 Yuriria is pretty, and there is a restaurant with a one-armed waiter that serves delicious fresh-water fish soup. The market is also full of neat stuff to see, and the whole town has a different feel to it than Moroleon, so we enjoy it as a close-by getaway place. 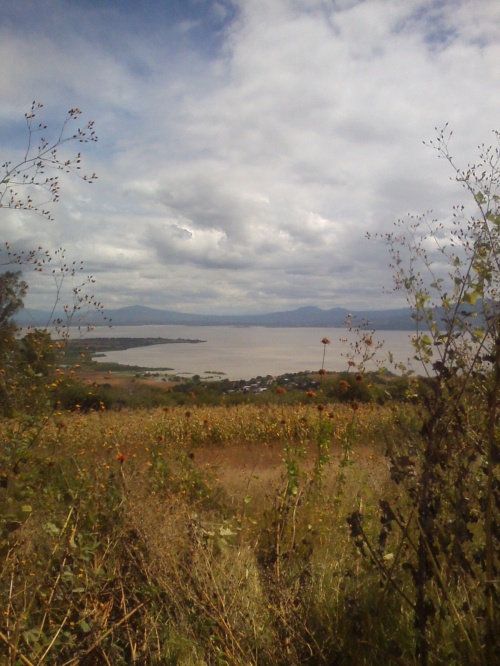 View of the lake by Yuriria

The actual name is Yuririhapundaro although most people refer to it as simply Yuriria. It was founded the Chichimecas in 945 D.C.As with Cuitzeo, the name comes from the Purepecha language. It translates as The Place of the Bloody Lake. With such a name, it’s no surprise that Yuriria was built along the banks of a lake. It’s actually an extinct volcanic crater that is renewed through rainfall rather than an underground source.

Yuriria is also one of Guanajuato’s Pueblos Magicos, and on that official site, the bloody lake gets its name from the soil runoff, not from dead bodies. Well, as the idea of Pueblos Magicos is to get tourists to come, I suppose having tainted waters might put people off, so the run-off explanation is given out. However, Diego Basalenque made note, in 1644, that the oral tradition of the native people spoke of sacrifices that had been made in the center of the lake to the gods, leaving the red stain of their deaths behind in the waters.

A scientific explanation might resolve the issue of whether the sacrifices or the volcanic soil give the lake its reddish color. It may be that the coloration comes from the rapid reproduction of microscopic plants, like the chromatiaceae bacteria, that bloom under certain conditions. The plants subsequently poison the water for the fish. A whole lake of dead fish would cause the local population to perform sacrifices to appease the gods, beseeching them to allow the water to return to its normal color.

As the lake is not always bloody, the scientific explanation seems to make sense. Certainly, when we have visited, it’s been as blue as Lake Cuitzeo. Locals say that the two last bloody events occurred in 1985, before the devastating earthquake in Mexico City and in 1986, before the earthquake in San Francisco, California. Well, as I mentioned, the extinct volcanic crater is smack dab in the middle of the lake–things like shifting fault lines might cause such an occurrence. 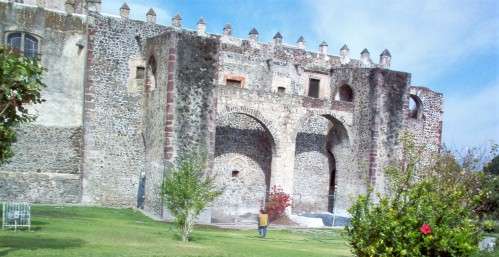 The impressive ex-convent of San Agustin in Yuriria

After the lake,  the most imposing structure in Yuriria is the Ex-convent of San Agustin. Construction was begun in 1550 by Fray Diego de Chavez y Alvarado, nephew of Don Pedro Alvarado, one of Hernan Cortes’ followers. Fray Diego is also given credit for the creation of the lake because he commissioned the construction of a canal that diverted the river waters to the crater in 1548. I’m not so sure he actually created the lake since the name of the area implies the village had been established by a bloody body of water long before the Spanish came (records indicate that the Tarascos, who conquered the area in 1350 D.C. made a note of the red tinted water phenomenon)…but you know how those Europeans like to take credit for everything. 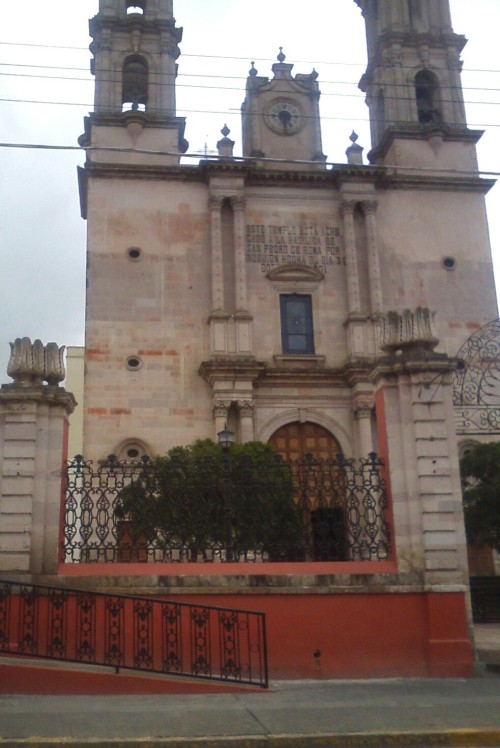 All things considered, Yuriria is a pleasant stop on the road to little-known tourist attractions in Mexico. 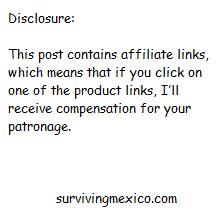 Getting Legal–Trip 5 and Residency at last 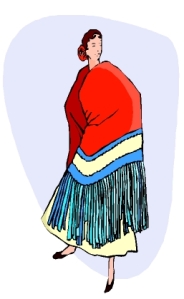 This is how I imagine I look with my new Mexican residency.

My husband began his marching about very early the next morning and shooed us out of the house before my son and I were quite awake. We said our prayers or crossed ourselves asking for a safe and successful journey there and back and started out.

We arrived in San Miguel de Allende very early, it was just after 8 a.m. As the office didn’t open until 9 a.m. and there wasn’t a soul in sight, we parked and walked a block to the Bodega for a second breakfast. We were only gone about 10 minutes, but when we returned, there was a line from the door to the street. I got in line with the rest and waited. I felt a little odd next to the gringos with their carrot juice and granola bars with my canned coffee and a huge chocolate doughnut bigger than my hand, but what can I say? The doughnut ended up being more than I could comfortably eat, but I didn’t want to risk my place in line to throw it in the trash, so I choked it down.

Being experienced at this, my husband and I opted for the divide and conquer approach when the doors finally opened and the stampede entered. He went to the main counter and got a number, I went to the little window and got a number. The main counter number came up first, so I went to ask about what I needed to do to legally work in México now that I was about to receive my permanent residency. It’s surprisingly easy considering all the hoops I had to jump through to get to this point. (See Getting Legal–Working Papers).

Then I waiting for the window ticket. It wasn’t exceptionally long, under an hour. I got to the counter, my husband right there with me in case he had to soothe my nerves (See Getting Legal–Trip 3) and the clerk asked what I was there for. I said, hopefully, to pick up my residency. He asked what the website said, and when I said just to come and present myself at the office, he said then my residency probably wasn’t ready yet, but that he’d look anyway. So for a heart lurching moment, I waited, fingers crossed, but it was there after all. I signed saying that I received my document and at my husband’s urging, checked it right then, to make sure it was in the envelope. Ironically, or perhaps intentionally, the card for Mexican permanent residency is green. So now I have my “green card”–get it? Even my photo (no bangs, no glasses, no earrings) wasn’t too bad. I floated out to the truck.

We were stopped in Celaya even with our two verification stickers prominently displayed on the windshield. The transito (traffic cop) asked to see my husband’s driver’s license and permiso de circular (permission to circulate the vehicle). He had both documents, so there was no problem and we continued on down the road.

We stopped in Yuriria for lunch and had tacos de tripa (tripe tacos) to celebrate a successful conclusion to this process.

Filed under Getting Legal