Patzcuaro, Michoacan is yet another Pueblo Mágico within easy driving distance from La Yacata, so there was nothing to be done but go. Its original name was Tzacapu-Hamúcutin-Pásquaro which roughly translates as Donde están las piedras (los dioses) a la entrada de donde se hace la negrura (where the stones of the gods are at the entrance to where they make the blackness) which sounds ominous. A better English translation would be ‘The entrance to the gates/entrance of Paradise’ or some such idea. The indigenous of the area held the belief that lakes were portals to the otherworld, so it comes as no surprise that there is a lake just outside of Patzcuaro proper. 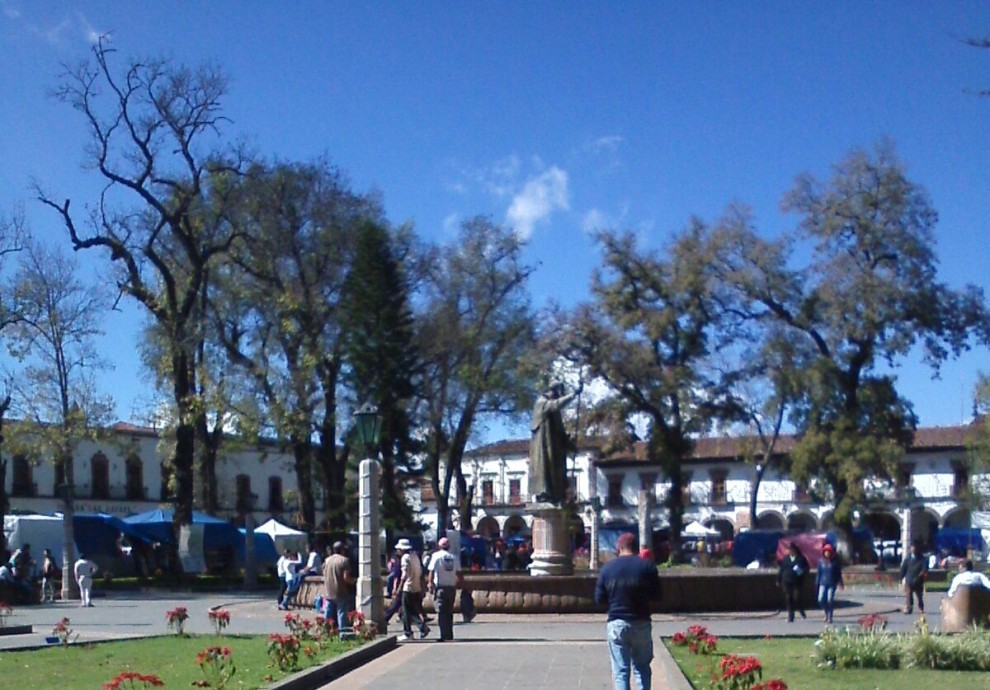 Fountain in the center of Patzcuaro, Michoacan in honor of Bishop Vasco de Quiroga.

The Purépechas founded the town sometime before 1300 mostly as a religious center. The Spanish arrived in 1522, and the town remained a religious center with a very small population until about 1539 when the bishop Vasco de Quiroga dedicated himself to the repopulation and revitalization of the area. He was well received by the native people, even earning the nickname Tata Vasco.

In 1776, the indigenous of the area staged a revolution which was put down in 1777. In 1886, the railroad Morelia-Pátzcuaro was finished, and in 1899, Patzcuaro had its first electric lights. That amazes me since La Yacata is still waiting for electricity in 2016!

Since then, it has been a popular tourist area, known for its pottery and basketry. It really is a beautiful little town, done up in the red and white style, with cobblestone streets, much like Cuitzeo.

Our underlying reason for visiting Patzcuaro was my quest for a foot-pedaled sewing machine. Someone told me that these could be found there. So there we went. The road was clearly marked, unlike our trip to the Monarch Butterfly Sanctuary and we were able to take the libre (free) road the entire way.

There happened to be a tianguis (flea market) in the centro (downtown), but there wasn’t much of interest for us. Most vendors were hawking new toys and boxes of cookies for Los Santos Reyes. We did enjoy some gorditas de nata and fresas con crema (strawberries with whip cream).

Around la plaza, we noticed that there were a number of American-styled coffee houses instead of the more typical taco stands. It really smelled heavenly but was pricey, so we opted not to buy any. In line with the town’s tourist popularity, there were quite a number of gringos (white English speaking people) enjoying their cups of joe, playing chess or reading. The stores were chocked full of delightful artesenia (arts and crafts) but at prices that were not accessible to the average Mexican or to us, for that matter.

Wandering around town, we came across the Basílica de Nuestra Señora de la Salud, built on a Purépecha/Tarasco pyramid platform. Notice the sign by the fence warns against tieing up your horses or leaning against it. I didn’t see much in the way of horses for that to be a current problem. There, outside the Basilica, vendors were selling prayer cards, rosaries, statues and peyote/marijuana cream for arthritis. Nuestra Señora de la Salud seems to be the same virgin found in Soledad, so I expect pilgrimages are made here as well to petition her curative powers. Tata Vasco’s remains are also housed within the Basilica.

We finally found the Singer Sewing store, and they had a foot-pedaled machine on display. However, the elderly owner would not sell it to me because she said it was a piece of crap, China made rather than hecho in Mexico (made in Mexico). My son pointed out that was just as well since if we did buy the machine, how would we get it in Myrtle (the VW bug) and back home? Good point. 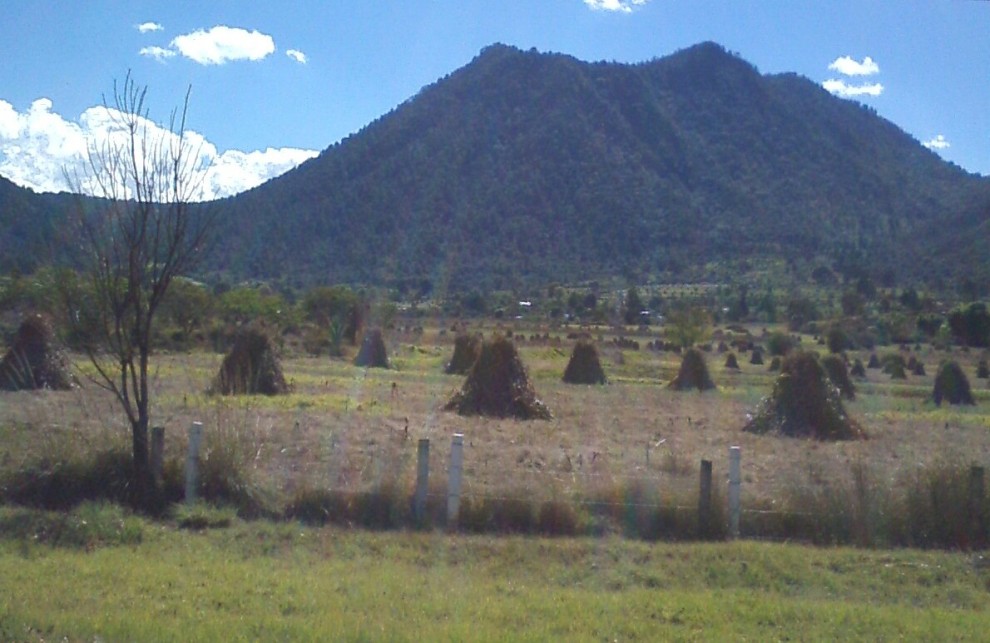 We stopped at a yonke (junk yard) and picked up some pieces for the revitalization of Myrtle and had a late lunch at Las Jacarandas just outside of Cuitzeo. An excellent day trip if rather uneventful.