This is my first blogging bucket list.  In fact, I was so unsure what a bucket list was, I looked it up.  For your information, a bucket list is “a list of things that one has not done before but wants to do before dying” according to Merriam-Webster.  Not that I plan on dying anytime soon, but I do think there will come a time when my blog dies (as in I won’t be blogging anymore).  So before that happens, here’s a list of things that would be good to do before that happens, so I can at least go out with a blaze of glory.

Have at least 10 pages and 100 posts with a customized menu bar.

As of May 10, 2017, I have 23 pages and 399 posts published (with 22 scheduled for publication). My Resources for a life well lived in Mexico page is currently undergoing some changes.  Feel free to drop by and add your two-cents (or submit a resource you think would be of interest to my readers).  I recently redid my menu bar to better organize my topics.

Dress up my theme with customizations.

Since I discovered Canva, I have been having a field day changing my headers and featured images.  I’m far from finished, but I hope that it all is looking a bit more professional.

Pay for a custom domain URL.

When I first started blogging, I went with the free WordPress.com domain name. Now I’m just a .com–moving up in the world! 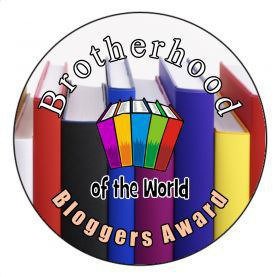 I was nominated for the Brotherhood of the World Award in 2015 and passed the goodness forward (although I never did hear from any of my nominees).

Join a blog hop or carnival to meet new bloggers in your niche.

I am in several blogging groups and have participated in several blog hops and carnivals.  I thought my niche would be homeschooling moms, but it turns out it wasn’t.  My niche is women living in Mexico.  Who’d a thought?  Anyhoo, I participate regularly now with my  South of the Border Bloggers monthly link up.  Are you a woman?  Do you live south of the US border?  Do you blog?  Join us!

Have a guest writer on your own blog.

My son WPTF has been a guest blogger on my site.  My artist friend Claudia has been a guest poster on my site with her adventures in San Pancho.  I had 9 brave women tell their stories in the series Modern Day Marias. Recently, I began interviewing authors in a monthly series, Inspirational women writers in Mexico.  The newest guest blogger series is entitled Blogs About Mexico Worth Reading.

Reach 100 Visitors in a Single Day

I average 200 visitors most days, but it certainly wasn’t that way at the beginning.  Although it isn’t a huge amount of traffic, I feel like it’s a solid number.  The next goal is Get to 500 page view hits a day.

This happened in December of 2016 and was from Judy King, who I later featured in the Inspirational Women Writers in Mexico series.  She had been doing some research on Mexican women in the revolution and came across my post about Marcelina.  We’ve kept up a regular correspondence since.

Although it wasn’t a positive experience, it certainly was memorable.  One of my email subscribers posted a comment to the effect that my blog was boring and wanted to know how to unsubscribe.  I unsubscribed him and deleted his comment.  Who needs that kind of negativity?

I have 82 email subscribers.  I’m nearly there!

This hasn’t happened yet, but it will be neat when it does.

I have two OMG experiences.  The first was when Barbara Winters, the author of one of my all-time favorite books Making a Living Without a Job: Winning Ways for Creating Work That You Love, followed my Surviving Mexico page on Facebook.  And the second was when Worldschooling Central featured one of my pictures on Instagram.

Get a custom logo.

I’m not exactly sure what prompted my desire for a personalized logo, but once I set my mind to it, I went out and got it.  Many thanks to Clau Guzes for her patience with me during the designing process.

Monetize your blog through ad networks or affiliates.

Although I have affiliate links throughout my blog, I really only make money with Amazon.  For two years straight, I’ve made enough from the commission to pay for my domain name.  Yeah me!

I have a Google + page.  I have 3 followers.  It seems that only I can see my posts.  It looks like I’ll have to work on that!  I’m actually thinking I should just delete it.

Make a go at Tumblr.

I can’t say that Tumblr has been a great success either.  I did recently reach a new level of achievement with 250 posts, but my followers are few and far between.

Turn a year’s worth of blog posts into a book.

I’ll let you know when this happens!

I have 108 followers.  I do however have 316 likes.  So that’s something right?  I think I need to work on my Twitter account.

I was contacted March 2017 by Animal Planet.  Apparently, they were looking for off-grid families in Mexico to feature.  Because my son is now a teenager and less apt to do command performances, and because we have fewer animals these days, I regretfully declined.  But it was pretty cool to be considered!

Be featured in a magazine.

We were chosen as one of the Star 2014 Modern Homesteaders sponsored by Mother Earth News. Really!  Check it out!

Start a blogging challenge of some sort and get others to join you.

This would be fun! Any ideas?

Boy, this would be nice.  I’ve begun featuring some of my book reviews on my site which has generated a modest income, but nowhere near $500 per month.

At one time I thought that world domination was what I wanted.  I’ve since decided that would be too much work.  I’m happy with where I am in the blogging world right now, although there are a few more things on my bucket list yet to cross off.