Surviving an Impact from an asteroid in La Yacata

Asteroids hit the Earth all the time. Usually, they are little rocks and hardly anybody notices, however, it’s estimated that over the last 600 million years, the Earth has been struck by at least 60 asteroids with a diameter of 3 miles or more. There are at least 3 craters left from these mega-impacts that are linked to major extinction events on our planet. The most famous mass extinction event was that of the dinosaurs 66 million years ago.

Seems like ancient history right? Well, there have been other catastrophic asteroid related disasters since then. In 1490, stones fell like rain killing more than 10,000 in the Ch’ing-yang district of China ranging from the size of goose eggs to water chestnuts. Scientists believe this stone shower was a result of an asteroid that exploded within the Earth’s atmosphere.

Then there was the meteor explosion near the Stony Tunguska River in Yeniseysk Governorate in Russia on June 30, 1908. Scientists believe a meteor burst just 6 miles from the Earth’s surface. The result of this explosion was the destruction of 80 million trees over an area of 830 square miles.

Russia was hit yet again on February 15, 2013, around the area of Chelyabinsk Oblast. The resulting explosion had 20-30 times more energy than the atomic bomb that exploded over Hiroshima. The meteor burst more than 18 miles above the surface of the Earth and produced extensive ground damage. Officials reported that 1,491 people were injured, most from shattered glass from windows that exploded. The intense light from the explosion was estimated at 30 times brighter than the sun and caused at least 180 cases of eye pain and 70 cases of flash blindness. About 20 people were injured by ultraviolet sunburn.

Will it happen again? Probably. Scientists are currently monitoring an asteroid called Apophis as it travels across the universe. It’s about the size of 3 football fields. In 2029, it will pass really close to some of Earth’s communication satellites in space, but there is a risk that it will orbit back in 2036 and actually hit the planet. If Apophis enters the Earth’s atmosphere, it could do so with 750 megatons of kinetic energy and a huge section of Earth would be in the “path of risk” including southern Russia, islands in the north Pacific, the coastlines of California, Mexico, Nicaragua, Costa Rica, northern Colombia, Venezuela and on through the Atlantic Ocean, stopping just before reaching the coast of Africa. In the projected hypothetical impact simulation, Colombia and Venezuela could have more than 10 million human casualties. If Apophis hits the ocean area, scientist forecast a short-range tsunami with a potential destructive radius of 1000 km at a wave height of more than 2 meters for most of North America, Brazil, and Africa, a radius of 3000 km for Japan and a radius of 4500 for Hawaii. I’m not exactly sure what that means, but it sounds scary.

So supposing an asteroid does hit the Earth, what then? The impact will vaporize (yes, you read that correctly) a large amount of the Earth’s crust, throwing rocks into the air for miles. Most of the rock will rain back on the Earth, heating the atmosphere and triggering massive forest fires. The dust from the impact and forest fires will block the light of the Sun for a year or so. Without sunlight, the climate will enter another Ice Age and vegetation will die. Without vegetation, animals, including humans, will die.

Or at least this is what happened 65 million years ago when the Chicxulub Crater in the Yucatan, Mexico was formed. We all know the result of that asteroid impact now, don’t we? 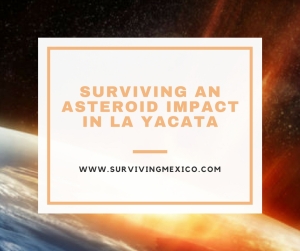 So what can you do to maximize your survival in the event of an asteroid impact? Nothing. Experts agree. (See also Asteroid hits Earth!, How to survive a collision with an asteroid) Although, European scientists suggest staying away from windows. (See What can we do if an asteroid threatens Earth? Europe Starts Planning)

Might as well enjoy life in La Yacata until it happens. 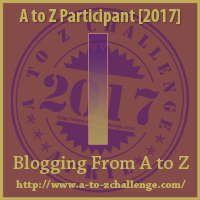