This post was written for inclusion in the monthly Authentic Parenting Blog Carnival hosted by Authentic Parenting and Living Peacefully with Children. This month our participants have written about authenticity through honesty. We hope you enjoy this month’s posts and consider joining us next month when we share about Self-Expression and Conformity.

Balancing the influences of 2 different cultures to raise one whole human, isn’t so easy.

Living in rural México has presented me with parenting challenges that I never expected. I imagined that our nuclear family would remain the same, regardless of where we lived or who we lived around. Boy, was I in for an awakening!

The first six months after we arrived, my son stayed with me at the house, and we continued our pre-school homeschooling agenda. But as time passed, we realized that in order for him to adapt successfully to our new community, he would need knowledge and skills about the language and culture that I, as a foreigner, would not be able to provide him.

So we decided that although I was teaching in a private school, the best chance our son had for an authentic education was in the public school system. So off he went. I hoped that any negative influences he would encounter at school would be minimal since he spent the day with either his father or myself and went to school from 2 pm to 6:30 pm, a mere 4 1/2 hours, but that he would learn about the intricacies of communication and behavior that can not be found in a book. A tall order I know!

Well, in 5 years of public school, my son still hasn’t quite succeeded in getting a 10 (A) in Cívica y Etica (Mexican moral values). For any other Mexican kid, it’s the easiest subject to pass. With his language and mannerisms, most of his classmates are unaware that his mother is not Mexican. However, it seems that our family does things just a bit different from the cultural norm and so my son is unable to choose the ‘correct’ answer from a list of possible answers because he looks at things from two perspectives.

Take, for instance, lying. It is culturally acceptable to tell a white lie, even expected. Once, when I was particularly frustrated about a lie, I asked why this person would lie when the truth would have saved us both a lot of hassle. I was surprised at the thought out response I received. I was told, this prevalence of first speaking a lie, even when there is no harm in the truth, can be traced back to the conquest of México by the Spaniards. The indigenous people learned quickly that it was better to lie about their beliefs, about their preferences, about their customs, even about their personal possessions or family than it was to tell the truth. The consequences of the truth were nearly always negative. If a man told a Spaniard he had 5 daughters, the Spaniard might decide that he had rights to those daughters. So the man lied to protect his family, saying he had no daughters. If a man told a priest that he did not believe in Jesus Christ, the priest might have the man and his entire family enslaved or killed. So the man lied about his beliefs and his amen became the most reverent at mass.

So, if my son were asked, he would say that there are occasions when lying is acceptable, not fully understanding the history of this practice. He has learned this from stories, classmates, news events and other influences of mainstream Mexican culture. However, in our house, there is not any reason that he should ever need to lie to his parents. This comes from my own Puritan upbringing. I have tried to counter the cultural norm with stories of my own.

And this leads to my son’s dual-perspective and low subject grade. For the moment, his mommy rules the roost. But what about tomorrow? As he progresses toward adolescence, I know that his friends will have more influence than I will, and I worry.

What I didn’t understand before was that it takes a village to raise a child, AND it’s the village that creates the man. What sort of man will he become? 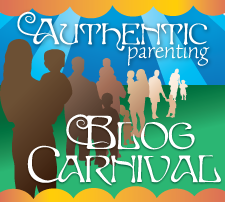 Please take the time to read the submissions by the other carnival participants:

(This list will be live and updated by afternoon February 22 with all the carnival links.)