El Buen Fin is the third week in November in México.

With commercial conglomerates like Wal-mart invading Mexican soil, it was only a matter of time until Black Friday arrived which it did with the invention of El Buen Fin in 2011. This was started by merchants in an attempt to stimulate the Mexican economy, but the true benefactors are the merchants themselves.

Banks and loan agencies offer advances on the aguinaldo (end of year bonus) to shoppers during the marketing period.

The advertising propaganda was intense last year. I even started to feel anxious as the big weekend approached. And the fact that it fell on a payday didn’t help that hole my money was burning in my pocket.

Well, I reasoned, we did need a few things. So with that weak rationale, we headed out to the commercial shopping center complex in Uriangato. It’s the first shopping center with a movie theater in the area and was built only about 2 years ago. Not that our income allows for much movie going, but it’s nice to know that it’s there.

The first stop was to look for a cell phone for my husband. His last phone died several months ago when it fell out of his pocket into the ajibe (dry well). We went to Coppel, but couldn’t get close enough to the display cases to see if there was anything he liked. He’s pretty particular. It must be a folding phone so he can carry it in his pocket when he is out with the goats and it won’t turn on and discharge because you know charging is a bit of a challenge without electricity. Then it needed to have buttons, not a touch screen and large buttons at that. His hands are coarse and unwieldy from daily manual labor. But like I said, we couldn’t get close enough for a good look, so we went to the TelCel store. We were able to see most of the phones, however, there were only two options, cheapy phones and touch-screen options.

We wandered up the corridor to the Iusacell store, but there were only 3 models. Then we headed to Soriana, but again, there were so many nalgas (backsides) blocking the glass display cases that we gave up. Instead, we headed to the bedding section. We needed some sheets as our last fitted sheet tore down the middle some week ago and we were sleeping on the bare mattress. $350 pesos or 7 English classes for those! Then we headed to the choni (underwear) section since everybody needed chonis (underwear) and socks. $150 for a pack of 4. Yikes! We picked up a stick of butter and a bag of sugar and headed out the door. In all, with the Buen Fin sales, we saved a whopping 50 centavos on the stick of butter. 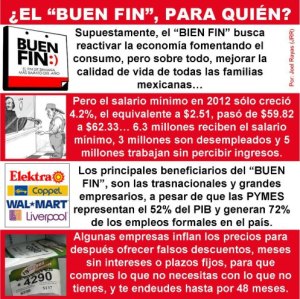 Retailers sometimes raise prices right before the shopping weekend and then lower them to create artificial savings for consumers.

So, when I got home, I checked those enticing ads out again. Those deals were really too good to be true. The phones that were on sale did not include the calling plan, which tripled the original non-discounted price. The motos on sale were only available through payment plans, with hidden interest rates that negated any savings you might have by buying this weekend. Other big ticket items advertised such as computers, entertainment centers, and bedroom suites had the same credit promotion. Thus, the fact that we used cash insured no great “discount” for us. I was disappointed but wiser as a result and next year will swear off any store that advertises a Buen Fin discount.

Buying on credit is never a good idea.