La Yacata also gets hail storms, though not nearly as damaging or deadly as the one mentioned in the news reports below. As you can see from this picture, our goats and most of our chickens found shelter in this hail storm in April 2016.

Hail? How can that be apocalyptical? Well, let’s reference one of my favorite movies The Day After Tomorrow when the Japenese businessman is bludgeoned to death by hail when he stops for a quick saki after work. Try telling that guy a hail storm wasn’t the end of the world!

One of the visions experienced by the Apostle John in the bible book of Revelation also centers around huge hailstones weighing about 75 pounds falling on the unrighteous. (Revelation 16:21)

Sound too fanciful? Well, let’s look at some hailstorms through history.

In the 9th century, several hundred pilgrims were killed in a hailstorm in Roopkund, Uttarakhand, India. In 1360, a hailstorm outside Paris, France, killed hundreds of invading English soldiers. King Edward III gave up his conquest of France after that. On April 30, 1888, 230 people, 1600 sheep and goats were killed in Uttar, Pradesh, Northern India by hailstones the size of oranges. On February 1, 1936, coconut sized hail killed up to 26 people and some cattle in Settlers, Transvaal, South Africa. On April 1986, 92 people were killed by grapefruit sized hail in Gopalganj, Bangladesh. On July 19, 2002, 25 people were killed and hundreds injured in a hailstorm in the Henan Province in the People’s Republic of China. 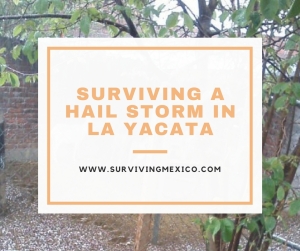 How about in Mexico?

Golf-ball sized hail destroyed crops in San Martín Texmelucan, Puebla on May 15, 2010. In Tepeji del Rio, Hidalgo 7 feet of hail accumulated on May 13, 2013, killing 7 people. Ping-pong ball sized hail destroyed the avocado crop in Michoacan in the worst hail storm in 40 years on March 25, 2015. On May 26, 2015, a severe hailstorm in Saltillo, Coahuila claimed one life and caused massive damage. On August 18, 2014, and August 30, 2015, massive hailstorms hit Mexico City killing 4 in 2015 when nearly 30 cm of hail accumulated on the streets in about 90 minutes.

So what can be done to prevent a hail storm? Well, in the 18th century, some enterprising Europeans tried to prevent hail by firing cannons into clouds and ringing the church bells. More recently, in the 20th century, Russia and the US attempted to seed clouds (adding chemical particles into clouds from rockets or aircraft) to control hail. There is no scientific evidence that either of these methods works.

Not being able to prevent a hail storm aside, what should you do in the event of hail?

If it begins to hail and you are in a vehicle, pull off the road and STAY INSIDE the vehicle. Of course, odds are high in Mexico that you will be on a bicycle or motorcycle. In that case, drive your vehicle up on the sidewalk and take shelter under an overhanging roof section.

If it begins to hail and you are in a building, STAY INSIDE away from windows. Avoid using electrical devices during a hail storm as well, just to be safe.

If it begins to hail and you are outdoors, COVER YOUR HEAD. Do not get under a tree because the hail might cause branches to fall. On one of our trips to Los Amoles for capulines (See Picking capulines) it began to hail. My enterprising mother-in-law put the bucket meant for the capulines over her head while they double-timed it back to the vehicle. It made and awful racket, with her shrieks and all, but her head was well protected.

There’s always one!  This dratted rooster decided to ride the storm out without taking adequate shelter.

The proof is in the pudding–you can survive a hailstorm in La Yacata, providing it’s not that one prophesied in Revelation with 75-pound hailstones.  If that one hits, well, best say your prayers.