Elvis has left the building

So after another half dozen times that our testosterone challenged macho goat knocked the door of the corral off, it was time for him to move on to greener pastures. We drove on out towards Valle de Santiago to this bridge where we typically find a herd of goats out and about. Sure enough, there they were. 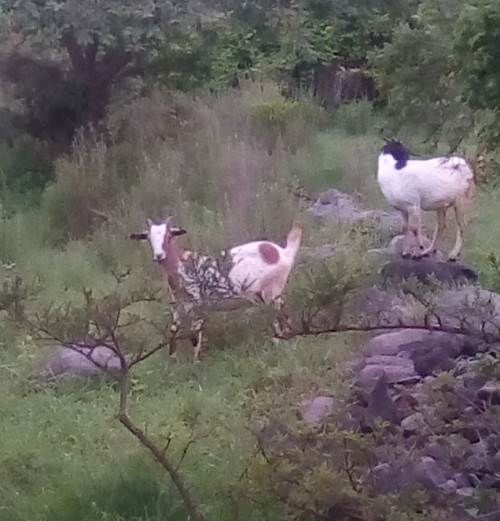 The brown and white one is preggers!

My husband made a deal, Elvis the macho goat for either 2 small female goatlings or one larger one that was pregnant. The owner said he could choose two small ones, which suited my husband just fine because one ended up being pregnant anyway.

During the transfer, my husband handed the lasso that was around Elvis’s neck to the new owner. Elvis leaped off stage (the back of the truck) and took off. The new owner flew through the air much like one of those cartoon characters. Elvis was immediately rechristened “Venado” (deer) by the laughing compadres (buddies) watching the spectacle.

Little chivito (Spot, one of the triplets) stepped right up to the plate now that Elvis is gone even though he’s not quite a year old. Whether Spot or Elvis has done the job, we are sure to have a batch of kids in December or thereabout. 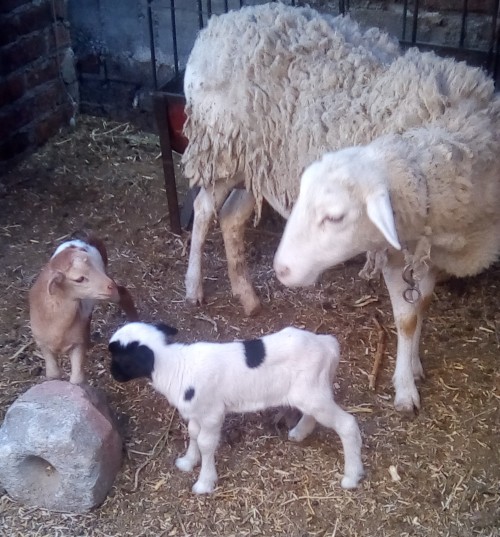 Apparently, the birth of the last pregnant ewe on our compound was the catalyst to sell, sell them all, for my husband. Of course, the outstanding debt on Cookie, the pregnant mare, was another incentive. Anyway, Preggers had two cute little lambs, a boy and a girl, but my husband wasn’t happy. They seemed to be more Pelehuey rather than Charol, meaning they didn’t have the fluffy fur of the mama and must have taken after the dad. Not like my husband has ever sheared the sheep we’ve had now for a year, so what difference does it make if they had fuzzy wool or not?

Anyway, mama and babies went to live with the neighbor down the road. They seem happy enough when I see them occasionally romping through the underbrush in La Yacat.

So then ALL the spare machos had to go. That meant the Borrego Boys, the Chivo boys, Salt and Pepper, and Payaso the one singleton in this bumper crop of twins, were loaded up in the back of the truck and headed to Puruandiro. Although it took all day, everyone was sold, most to become the head mucky muck of their own herds, since the macho needs a’changing every few years to minimize inbreeding. Some women I know subscribe to this philosophy as well, but that’s another story.

So that left Zombeta all alone in the back corral. I convinced my husband to move her to the front area so she wouldn’t die of loneliness. Her pitiable bleats were hard on my heart. He did, onto our “patio” that is Cookie’s corral as well. Zombeta was happy.

A few days later, he found a buyer for Zombeta and we are now sheep-free. She lives now at another neighbor’s who has sheep and seems well enough.

Then disaster struck. The mama of the triplets took sick. The whole side of her face swelled up. We went to the animal clinic who said it might be a tumor. Since it happened overnight, we thought it was more likely a bite from something. They gave us some pain medication and sent us on our way.

I suggested that it might be something the rats dragged in because boy do we have rats this year. They have even managed to find a way inside the house. No rat trap has been able to capture a single one. During the week mama goat was sick, my husband managed to kill 15 small mice, although some committed suicide in the water trough, and one HUMUNGOUS ROUS (rat of unusual size) outside, but, you know, there’s always more.

Mama goat died. We had quarantined her and the triplets to the back corral. We moved the orphans back to the main goat coral and bought some milk. Unfortunately, two days later, Spot died too.

Now we thought it might be ticks. When my husband checked animal ears, sure enough, monstrous ticks. He spent the afternoon plucking them out of the ears of goats, dogs, and horses. Then everyone got some powder in the ear and bath. That seems to have done the trick. No one else has died although this morning, it seems like Bunny, one of the triplets doesn’t want to eat. That doesn’t bode well.

We are trying to stay on top of these mouse and tick infestations and so far are ahead of the game. Now, we are just waiting for Cookie to have her baby, it ought to be any day now.

These days I have no idea what my husband wants to raise, sheep or goats because we certainly do not have the space to raise both species. Nor the patience. When the herd/flock are taken out to graze, they segregate themselves and the work to keep them safe from roving wild dogs, snakes, and poisonous plants is doubled.

So one Sunday my husband comes back from the grazing and says he’s sold the sheep to the neighbor. Zombie, Fuzzy and the others are gone in a few minutes, leaving us with just the Borrega boys and Zombeta.

With the cash in his hot sweaty hands, we head to Cerano that very afternoon to find a macho for our goat herd. We have lots of boys, but nothing close enough in maturity to fulfill any husbandly duties when the next heat cycle comes around later this month.

We happen across two herds of about 200 goats grazing in a recently harvested corn field. My husband does some tough negotiation and buys this young buck, quite a looker, for our fair ladies back home.

Having some extra cash, he haggles for yet another pregnant goat. He wanted a third, but just didn’t have the cash to complete the deal, so home again, home again jiggidy, jig we went with Macho and Prego. 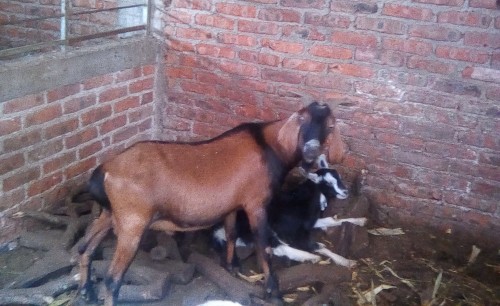 The three little sheep, Borega Boys and Zombeta, were allowed free run of the patio area, even had their own little feed box, so that they could grow up healthy and fat. Of course, this meant that the patio was full of sheep pellets as a result of their ample diet. Fun right?

I thought we were done with sheep acquisition, but NO! Since my motorcycle has been on the fritz and there hasn’t been any gas anyway to fill to the tank,  my husband found a buyer willing to trade sheep for it. So in addition to the three little sheep, we now have one pregnant ewe, and one who had recently given birth to twins, so 4 sheep with one on the way, making our grand total 7 sheep (and a half).

The poop pellets on the patio were getting out of hand, so my husband went to work at revamping Miss Piggy’s bungalow in the back. The first attempt failed utterly. These are Mexican sheep after all and no little wall was going to keep them from the promised land (in this case, my backyard full of tasty plants). So he had to install barbed wire around the perimeter and that seems to have done the trick.

To keep them shaded, he rigged a wire/branch roof which in a few weeks will be covered in chayote leaves, making a nice little palapa for everyone in the sheep compound. Of course, I’m hoping in a few weeks, we won’t have any more sheep, but you can see how this sheep thing keeps going and going.

The mama sheep with the twins has been sickly since we’ve gotten her. Malnourishment and a rough delivery are the probable causes. My husband, Papa Chivo, has been bottle feeding the twins goat milk to supplement their diet and they are more lively. The mama gave us quite a scare when she stopped eating for a few days, but some tempting greens and some olive oil brought back her appetite and she seems to be getting stronger as well.

So here we are being overwhelmed with goats and sheep. I actually had to go out and count again how many we have. 2 eves, 3 baby lambs, 8 baby kids, one goat macho, 5 nanny goats and 2 (one sheep/one goat) still on the way. Good grief!

Would you like to read more about our animal adventures?