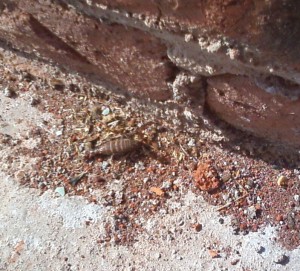 So after the chickens and ducks had become my salvation in the battle of the flies, I started thinking about what other enemies might they take on.

Scorpions (los alacranes) are also a hazard I hadn’t planned on. They come right into the house and make themselves at home. I’m worried I will come across one and get stung. They especially come out at night. As we have no electricity, a midnight trip to the bathroom may prove dangerous. This morning, I picked up my jeans that I had left puddled on the floor when I went to bed. Out fell a major daddy of a scorpion. Good thing I shook my pants out before putting them on. I don’t want to imagine the alternative. Reportedly, there is a Raid for scorpions too. It comes in a red canister. I was told to spray it around my bed to keep them out, but I’m not sure what is worse, the scorpion or the poisonous gas from the Raid right where we sleep.

Once, a visitor to our home thought to help us rid ourselves of scorpions by giving us some herbs to burn in our fireplace.  Supposedly burning these herbs would create a smell that the scorpions couldn’t stand and they would vacate the premises.  Well, not to hurt her feelings, we burned the herbs.  They smelled a bit sulfury.  The thing is, I’m not sure scorpions can smell.

Local lore states that finding a scorpion in your home means you are to come into money. I initially pooh-poohed that idea. However, one night, there were no less than 3 scorpions scaling the walls. And the next day, we won the grocery store “rifa” (raffle) for $100 pesos of free food. So maybe there is something to that superstition after all. Fortunately, it doesn’t seem to matter that the scorpions had been killed dead upon discovery.

I had this idea that chickens would make our house and garden safe from the dreaded scorpion. I imagined a flock of chickens in our yard, patrolling the grounds so that it would be safe to venture outside. Something like the mongoose and snakes I suppose. Well, I have been disillusioned. Chickens, if they eat scorpions, and are stung, will die. So much for my army of patrolling chickens.

My husband is very leery of scorpions and he has been stung and several occasions. It is painful, although often not life threatening unless the person has an allergy. Often, however, the person doesn’t know he or she has an allergy until he or she has been stung. So when I holler that there is a scorpion, he comes with needle nose pliers in hand. He grabs the scorpion just below the stinger and kills it. There is no reason just to set it free in the wild. Then with one disposed of, we start the hunt for its mate. For when there’s one, there’s two or so goes the scorpion saying in Mexico.

According to my little herbal guide book, Antiguo Formulario Azteca de Yerbas Medicinales if you happen to be stung by the alacran (scorpion) you should immediately cut a small cross over the sting with a sharp, disinfected knife, chew several cloves of garlic, add some powdered oregano to the garlic and apply it to the cut.  My father-in-law was recently stung and used bleach to cleanse the sting.  I wouldn’t have thought of bleach, but apparently it will neutralize the venom if applied quickly enough.

My battle against the scorpions also extends to outside because scorpions don’t seem to be kept out with screening. Any scorpion within my garden realm is subject to extermination. Scorpions have stung our new puppies, killed off baby bunnies and any chicks who happen to try and make a meal out of one, injured our best egg layer and generally make a nuisance of themselves. To the best of my knowledge, scorpions have no natural predators, except me. So I fight the good fight and try to keep my area scorpion free.