A few days after Cocoa joined the gang, my son tried to introduce the new addition to the Puppers. Fred was curious but George was jealous. He barked at Cocoa who leaped out of my son’s arms and ran to the corner of the yard, curling up on himself like a pillbug. My son was disappointed. He’d hoped they could be friends. 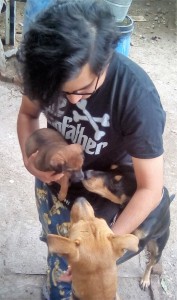 Since the dogs aren’t getting along, we have three walks to take in the morning, and three in the afternoon. Fred and George have priority. Then Terry, as fast as possible–Terry’s choice not ours. Finally, Cocoa. He’s small, so he doesn’t go too far, but he loves the grass. He throws himself about like a kid in a ball pit. He isn’t much interested in doing his business outside though–too many things to sniff.

Our walks have added a Where’s Waldo activity just to liven things up. The borega guy has an orange and white cat that looks like a sun-bleached Garfield. This cat has taken to my son like they are long lost buddies. It comes mewing along every time it sees us, completely oblivious to the dogs.

So each of our walks, we play Spot the Cat! Sure as anything, at some point along the walk, Garfield will appear. Sometimes it’s on a rock, waiting like the Cheshire Cat. Other times it is in the cornfield, just watching us pass.

Fred and George are absolutely stunned at Garfield’s presence, every single time. They freeze and it takes some coaxing to get them started again. Terry, when he takes the time to notice, tries to attack. The new leash has proven its mettle. Cocoa can’t see Garfield over the clover and has no reaction whatsoever.

We’ve recently realized that Garfield is actually a Mrs. Garfield, and a pregnant one at that. She now not only appears on our walks but follows us home meowing piteously for food. She’ll only accept food from my son for whatever reason. And since she’s eating for 23 (or so my son says) she comes morning, noon, and night for more vittles.

I think she’s taken up residence in my sister-in-law’s house and that’s where the kittens will appear. Time will tell!