So round about the time my son was finishing his secondary education (See Secondary Graduation) his guitar broke.  Talk about disappointed.  Of course, I pointed out that we did buy it second hand (See Music Lessons) and it lasted nearly 2 years as he slowly mastered its use and care.

Since my parents sent a little money for his graduation, we earmarked it for a new guitar and off we went in search of one.  We went to every single pawn shop in Moroleon twice.  We even looked at the new ones at Fabricas de Francia after swearing I’d never set foot in there again.  I contacted all the musically inclined people I knew in town and even some who weren’t.  Nothing satisfactory appeared.

Since I had such luck searching online for my piano (See Piano Shopping), I thought I’d give that route a go. Lo and behold, my search got a hit on Facebook and I contacted guitarras Amezcua to set up an appointment to see guitars.  I googled directions to Paracho de Verduzco, Michoacan and my next day off, we set off on our latest adventure.

Google maps gave me three routes and I chose the one that seemed the most interesting rather than the route that took us through Morelia.  What a drive!  We were enthralled with the scenic views, forested areas and little towns we drove through.  It took us a bit longer than we anticipated, but the trip there was disaster free.

We drove past this HUGE guitar monument as we entered the town.  Guitars hung from store windows and wooden shacks to the left and to the right.  I said to my son that if we couldn’t find a guitar in this town then we wouldn’t find a guitar anywhere. After all, 40% of the local economy is based on the manufacturing of guitars and other stringed instruments.  There are 15 guitar talleres (factories) which produce about 5,000 guitars every week.

The town itself is very small, with a population of 357 residents, and was undergoing street renovations while we were there which limited our explorations.  In addition to guitars, every little shop was crammed full of all sorts of handcrafted wooden items.

We delightfully purchased the items in the picture above at a fraction of what they cost in Moroleon. 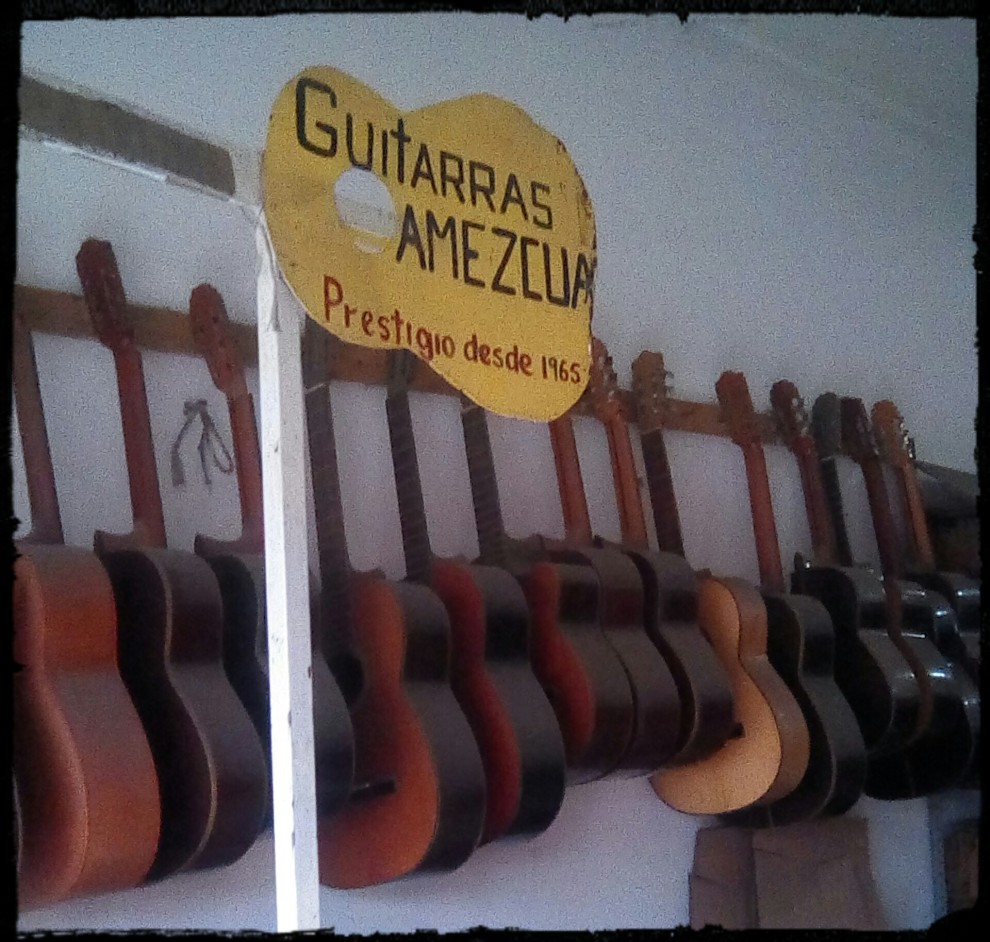 We found the taller of Sr. Amezcua, but it was closed.  As he said he might be in a meeting at his daughter’s school and to call or send a message when we arrived, we did. He said he’d be there in five minutes, so we waited.

His shop was small, but the guitars were beautiful.  In the glass cases, there were autographed photographs of famous cantantes (singers) from the 50s and 60s with their Amezcua guitar.  My son asked for a studio guitar and Sr. Amezcua put one in his hands immediately.

As soon as he strummed the strings, he was smitten. I encouraged him to try a few guitars to make sure that he wanted that one.  So he tried out a flamenco guitar.  He liked that one as well and it was less expensive, however, the rich tones of the studio guitar had stolen his heart.

My husband negotiated a bit and we walked out of the shop with the guitar and a soft guitar case for $3,200 pesos.  Later, my son had an appraisal done on the guitar and it would have easily cost $15,000 pesos or more in a store.  Needless to say, he’s quite happy with his new guitar.

Those scenic views we so enjoyed on the trip there turned into nerve-wracking hairpin curves in the dark.  We ran into a military checkpoint.  The young officer asked where we were coming from and where we were going, then waved us on.  Or at least my husband and I thought he waved us on.  My son said that the officer actually told us to pull over to the side for a full inspection.  Oops!

Then, we missed our turnoff and ended up driving through Morelia, but once we are in Morelia, we can find our way home pretty well.  So, overall a good adventure!

Interested in learning more about the lovely little town of Paracho, I did some internet research and found that for 2 years now, the town has been trying to break the Guinness world record for most guitarists at one gathering.  This year the gathering had nearly 3,000 participants.

It was no surprise that Paracho is the home of the Feria Nacional de la Guitarra (National Guitar Festival) which occurs in the beginning of August every year.  This just might be something we make sure to attend next year!