A room of her own–Waterfall in the kitchen?

I have to admit that the little house in Sunflower Valley to being a bit lacking in several aspects. First, the floor is white tile. Who in their right mind would use white tile? It is NEVER clean.

Then there are the holes in the roof. It leaks in 3 of the 4 rooms. I can see the sky through some of the holes. And while we are in the dry season and the holes shouldn’t be an issue, this week they became an issue when the floater on the tinaco (water storage container) on the roof went caput. So when the new load of water came gushing in from the street, the tinaco overflowed and it came gushing down on our heads in the kitchen, along with chunks of the ceiling.

So there we were wading in the new waterfall, making the floor far from shiny white. Stopping the cascade required pliers and some guessing. Which would turn the water off from the street and which would turn off the water for the entire street? Well, no one complained, so I guess we got the right one.

As I really didn’t want this to be a constant issue,  it needed to be fixed. My husband came and looked it over. We had recently bought 2 new tinacos (water storage containers) each of which came with floaters which we don’t use because we don’t have running water. (See Water Woes) The tinacos are filled with rain water or from the water delivery truck. When they are full, we close the lid of the tinaco. No floater needed. Anyway, he brought that piece over and went to work. 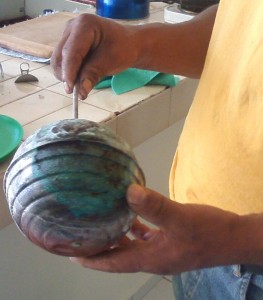 It required draining the tinaco, so he left the water on, and did other things. A short time later, it was fixed, so he turned the water back on to fill the tank and went home. He came back later to check on things, and the bathroom was flooded. Apparently, the water pressure from the now working tinaco was too much for the toilet pipes. It had flown out of the wall connection and the house was flooded, again. 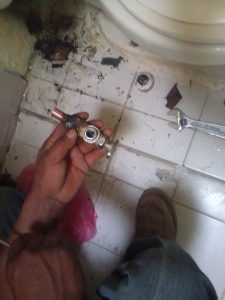 This attachment just shot right out of the wall.

So the tianco was drained yet again. I can’t WAIT to see this water bill. When the copper tubes were dry, he blowtorched the pieces together. Then the floater in the toilet broke. That required a new piece, which he went and got and replaced. Then the hose from the toilet tank to the wall pipe broke. Another trip for a new piece and replacement.

Finally, after 2 days of effort, the toilet and tinaco were fixed. Now we don’t have to bucket flush anymore.

Of course, these are things I have brought up several times to the owner. It even prompted a trip to Yuriria, well that and the leftover water charges from the previous tenant that she said were taken care of. With the repairs done, another trip was in order.  Unfortunately, we didn’t find anyone home, although we did pick up some fruit trees from a guy selling them from his wheelbarrow for 15 pesos each.

So I called and explained that I would only be paying $600 pesos this month for rent.  That was fine with the landlady.  What else could she say?  And she seemed all interested in getting the roof fixed, which was my next item on the repair list.

4 responses to “A room of her own–Waterfall in the kitchen?”