Blogs about Mexico worth reading–Creative Hands of Mexico

Creative Hands of Mexico is written by Leigh Thelmadatter  Her husband Alejandro Linares does most of the photography.  Readers have a unique opportunity to meet crafters throughout Mexico and learn about their skills and art.

What brought you to Mexico?

I came in 2003 to teach English at the Tec de Monterrey. I worked at the Toluca campus until 2008, and have since been at the Mexico City campus.

What was the inspiration for your blog name?

Creative Hands of Mexico… The focus on hands is because of its focus on handcrafts, but we wanted some flexibility to veer into other, similar areas.  For example, we did and article on Ricardo Angeles, the son of Jacobo Angeles (the Oaxaca alebrije producer), who does murals, but with themes and techniques related to alebrije making.

What area of Mexico and topics does your blog primarily focus on?

I focus on Mexican handcrafts and folk art. I try to cover artisans and traditions that are unknown (even among others in the field), but I also write about the basics because these articles get a lot of hits. Most of the articles relate to central Mexico and Oaxaca as it is relatively easy for me to travel to these areas. I prefer to write on artisans I can visit in their hometowns and workshops because background and culture are so important to appreciating real Mexican handcrafts over knock-offs…. Plus we like to include a lot of photographs with the article.

Why do you blog?

This is kind of a long story. After a couple of years in Toluca, I began to get bored and things started looking the same. Needing to improve my Spanish, I began writing articles for Wikipedia in English. I started with geographic localities (places I visit). Those travels put me in touch with handcrafts in small, non-tourist towns and led me to research into information on both handcrafts/folk art and fine art. So my interest in Wikipedia shifted into these areas.

However, only information that is already published in traditional media can be synthesized into Wikipedia articles and there are many many artisans and handcraft/folk art traditions that are woefully ignored. I still write Wikipedia articles and work with students at my school on Wikipedia projects (text and multimedia). The blog is an outgrowth of and complementary to this work.

The idea is to give those with little or no Spanish ability information easily available online about Mexican handcrafts and folk art. Most people see the colorful stuff in markets in tourist areas and fans like me start this way as well. But much is cheap and almost none of it is the best of what Mexico has to offer. Like any other artistic and cultural purchase the buyer has to be knowledgeable. But my biggest hope is to inspire more foreigners (both those who visit Mexico and expats like myself) to explore outside the typical tourist venues. Most artisans live in rural areas and do not get paid what their work is worth. Buying directly from the artisan is best for both artisan and collector if it is at all possible.

Some of my posts, especially those dealing with crafts towns, have travel tips and assure prospective visitors that it is safe. If there are caveats, I do mention them (like not driving back roads at night), but the reality is that it is the people who live in these areas who are at risk from Mexico’s infamous crime problems, not the tourist.

There are a number but if I have to pick one it is  The woman behind the colors. This one is about Juana Gutierrez, sister of wood rug weaver Porfirio Gutierrez, and a master of making dyes from local plants and other natural sources. This is a good example of why the blog exists. I could and did write a Wikipedia article on Porfirio. With charisma and an absolutely excellent command of English, he has done exceptional promotional work for the family. Although he is Juana’s biggest fan, both English and Spanish media are more drawn to him as Juana is shy and prefers to tend to her dye pots and domestic duties.

Not to knock Porfirio’s weaving skills, which are quite considerable, I decided to focus the blog article on her.

What has been the most difficult for you to blog about?

The main challenge is to get the kind of information and photographs needed to make the blog stand out. It is really not enough to look at a couple of pieces then write about them. The pieces, their making, and the people behind them all have stories and it is those stories that are most important to the blog.

Most Mexican artisans do not have reliable (or often any) Internet access, not only because of cost and/or lack of signal or hookup but also because many are intimidated by technology. The vast majority are from rural areas and live fairly traditional lives. This is true even for younger generations.  It is necessary to visit artisans, talk with them, see the processes… and before any of that happens… often time is needed to gain their trust.

This takes both time and money, and most of our weekends, vacations and spending money are dedicated to this. We have started a tip jar in hopes that we can get donations to allow us to get to more places and more people. 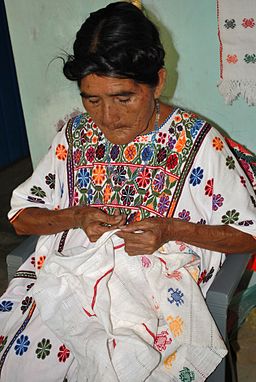 What has been the best experience you’ve had in Mexico?

Xochislahuaca, Guerrero. A little town dominated by ethnic Amuzgo is known for their intrícate weaving of huipils, rebozos and more. We were fortunate to be invited there by a woman who exhibited her town’s work at the Museo de Arte Popular in Mexico City. Her brother runs the community museum and he not only gave us a tour of the tiny collection, he arranged for a number of artisans to come and set up for photos and talk about their work.

Some, including his mother, do not speak Spanish, only Amuzgo, but that did not stop her from inviting us to eat one of the best meals I have ever had here. (Isn’t grandma’s cooking ALWAYS the best?) We even praised the plain water we were given to drink, as it was from a local spring and not even purified water can taste like that. I’m sure she thought we were nuts, but we explained we cannot get anything like it in Mexico City.

What has been the worst experience you’ve had in Mexico?

A couple of months into living in Toluca, I had gone the city market basically to kill some time. That market was (has since been moved and reorganized) like a labyrinth, wandering aísles of similar looking stalls, all covered in tarps. It is very very easy to get lost and become claustrophobic.

I should mention that before moving to Mexico I had lived in southern Arizona for 11 years and in Germany for four, so I assumed that I was prepared for anything central Mexico had to throw at me. I was very wrong.

I basically had a small panic attack, desperate to find a way out of the market. When I finally did, I went straight home and even went to bed for a few hours just to tone down the sensory overload.

Lesson? In the words of Hans Solo “Don’t get cocky kid.”

I still have times when I need to “be gringo,” but nothing ever as bad as that since.

What advice do you have for those planning to move or travel to Mexico?

You need to ask yourself just how flexible you are. There is a reason why immigrants from any country to any country generally lived segregated into communities of other immigrants…. One can recreate, at least to some extent, the environment from back home.

Everyone experiences culture shock, and even after 14 years I still complain about some things not being like home (don’t get me started on banks here).

But the best Mexico has to offer is not in resorts, Cancun, Acapulco nor in expat enclaves. It is in the markets, the little towns, the fiestas etc. where you might be the only foreigner for miles. It is indispensable to learn Spanish to the best of your ability. Otherwise, you are only pretending to live in Mexico.

If you are currently in Mexico, how long do you plan on remaining?

No plans whatsoever of leaving. Something big would have to push me out or pull me back to the States.

Pedro Martinez Lopez with a tree of life at his home/workshop in Acatlan de Osorio, Puebla.

Where do you see your blog going?  What are your future blogging plans?

Our hope is to expand what we are doing under a non-profit model. There is way too much for two people to cover and as I wrote in a recent blog post, Mexican handcrafts are like matryoshka dolls, there are more layers underneath than can be guessed at. Volunteer writers are always welcome, especially those who live outside of Central Mexico. If fundraising becomes successful, we could perhaps even pay some Mexicans to do at least the interviews and photos. One region we would love this for is Chiapas.

Where can you be found?

Filed under Blogs about Mexico Worth Reading, Guest Blogger Adventures