Yesterday afternoon, I turned into the neighborhood where I live and came upon three men with machetes cutting down the flowering trees at the entrance. Without thought, I stopped and demanded to know what they were doing

The leader of the two said he was beautifying the neighborhood since the branches were low hanging and ugly. I asked if he had permission. I meant permission from the owner of the lot who borders the trees, although I suppose the trees were technically in the public thoroughfare. He thought I meant permission from the Departmento de Ecología (Department of ecology) since cutting green trees is a fine-able offense. He said he didn’t need permission to tidy up the place.

So I asked who he was. He said he was the owner of the trees–of course. I told him I didn’t believe him. As I am part of the community board of directors, I know nearly all of the people who own lots in the community. These three men were strangers to me. Not that my neighbors in La Yacata are any better.  (See Good Fences make good neighbors, unless your neighbor steals it) He told me that I should contact the town council and tell them to come and trim the trees in the neighborhood.

My Spanish failed me at this point. I wanted to say eloquently that the town council would not come and trim trees until after they installed water, sewer and electricity in our community. I wanted to say that cutting such beautiful trees is a crime against nature. I wanted to say that he was a lying piece of poop that really had some gall thinking I would believe his altruistic motives for cutting the trees when we both knew he would take and sell the leña (firewood) in town. 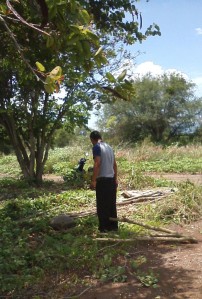 What I said was that I would take pictures and show them to the owner when he asks me who cut down his trees. So I did, not that it did much good. One man turned his back to me, the other partially covered his face. I thought maybe I could get some identification from the moto (motorcycle) that was parked there, but it didn’t have any license plates.

I remained on edge the rest of the afternoon and into the next day. I tried to go and see the president of the neighborhood, but he wasn’t in his office. So I sent an email with the pictures and an account of my interaction with the men. He wrote back and said that he would investigate the matter.

My husband scolded me afterward. I shouldn’t be going around taking pictures of men with machetes. What was I thinking?

I have to admit to being impetuous at times. These men were destroying that which I enjoyed every day. The flowers on these trees and the scent they emit are my welcome home. How DARE they destroy that?

You see, that morning the mother of three of my students was shot and killed while heading to the gym. Last week, the father of a former student was kidnaped and is being held for ransom. Last month, someone in front of Waldo’s (a local discount store) was shot “accidentally” by police officers. The month before that two transito (traffic) officers were shot and killed by “unknown” assailants. Not so very long ago, my nephew was taken and tortured by rival drug members. Before that, my mother-in-law was run down by a police vehicle and killed. And before that, my husband was kidnapped right in our own neighborhood.

Those are the local issues. Looking beyond the borders of my own town– Last month, 42 people and one police officer were executed by the police just a few hours away in Michoacan. Last September, 43 students disappeared in Guerrero.  Mexico averages nearly 100 murders a day. In the past three years, more than 10,000 people have disappeared. Last week, a reporter and 4 female activists were tortured and murdered. Femicide is commonplace. 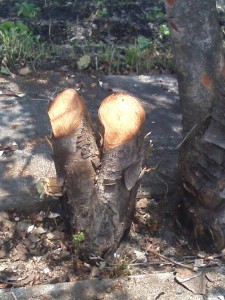 And I can do NOTHING about any of these things. This place that I now call home is lawless, corrupt, and dying. The beauty that has existed for thousands of years is threatened by the unethical actions of man.

However, I could threaten the bejeezus out of these three men. Maybe word will get out that a crazy “gringa” (white lady) lives in La Yacata that goes around hugging trees and dancing in the rain–someone these would-be wrongdoers should steer clear of. It’s a small, unrealistic hope. The truth is there is no enforceable consequence for their actions. They know it. I know it. The government knows it. The world knows it. But I have to try.

2 responses to “Fighting for Flowers”