Why we chose to send our child to preschool in Mexico 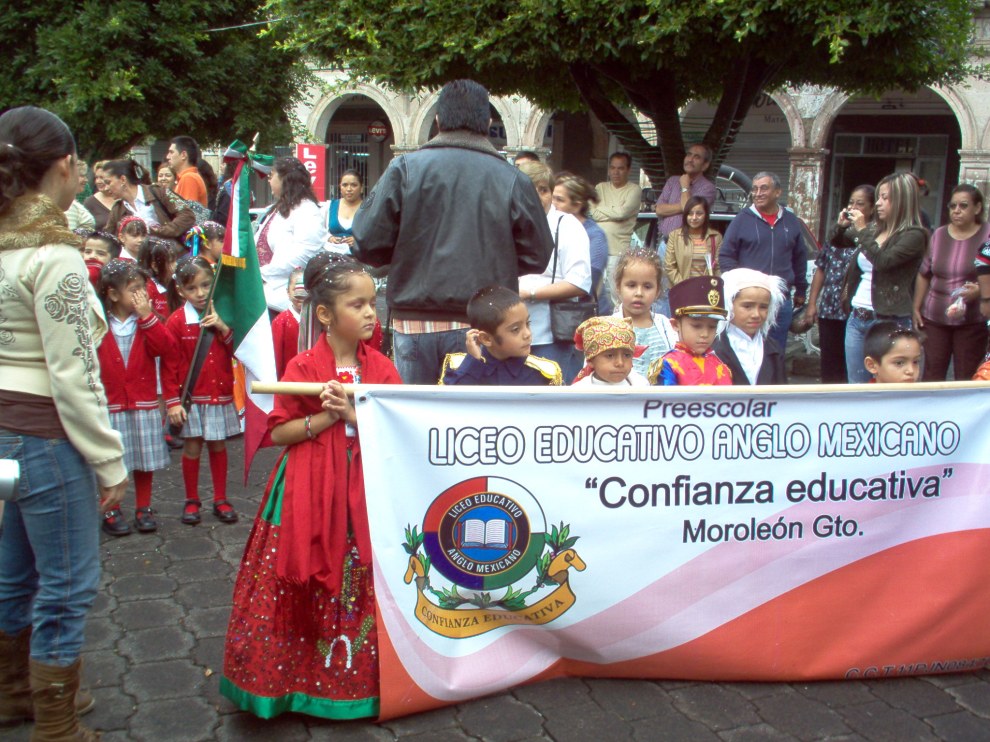 Marching in the Kinder parade for Independence Day.

Before you get all up in arms, our choice in formal education was made with the idea of finding what was best for our son. We live in rural Mexico, and the educational system is a bit different here. Not better, just different. Our ultimate goal has been and continues to be adequate life-learning for our son, and that has included sending him to school.

In Mexico, kinder (preschool) starts at 2, yes 2. The little tots typically attend school from 9 am to 1:30 pm Monday thru Friday, with no nap time. Children must be the minimum age for a grade the December of the year they begin school. This means that children born on January 1 are more than 12 months older than their classmates born December 31. Talk about classroom diversity!

We arrived in Mexico when my son was 4 years old, which was just as well because starting school at 2 was not in my plans. I kept him at home with me until August, so he actually was 5 when he began school. We opted for a private, bilingual kinder, mostly because I was able to get a position there and teach my son half a day, along with 20 other 4 and 5-year-old Mexican children. Overall, it was a good experience for him (though not so much for me). (Learning and Teaching Year 1) It allowed him to improved his Mexican Spanish in both formal and informal situations and keep up his confidence in the process since he was the top English student.

Kinders (preschools) typically offer music, art, some sort of physical education, math and reading. Students are given homework daily in the hopes that it will instill a sense of responsibility in them. It seldom does. There is an almost unholy quest for students to be able to read before they finish kinder. Fortunately, Spanish is a bit less complicated than English in regards to reading (The Easiest Language to Learn) and most children are able to master basic Spanish language reading skills. 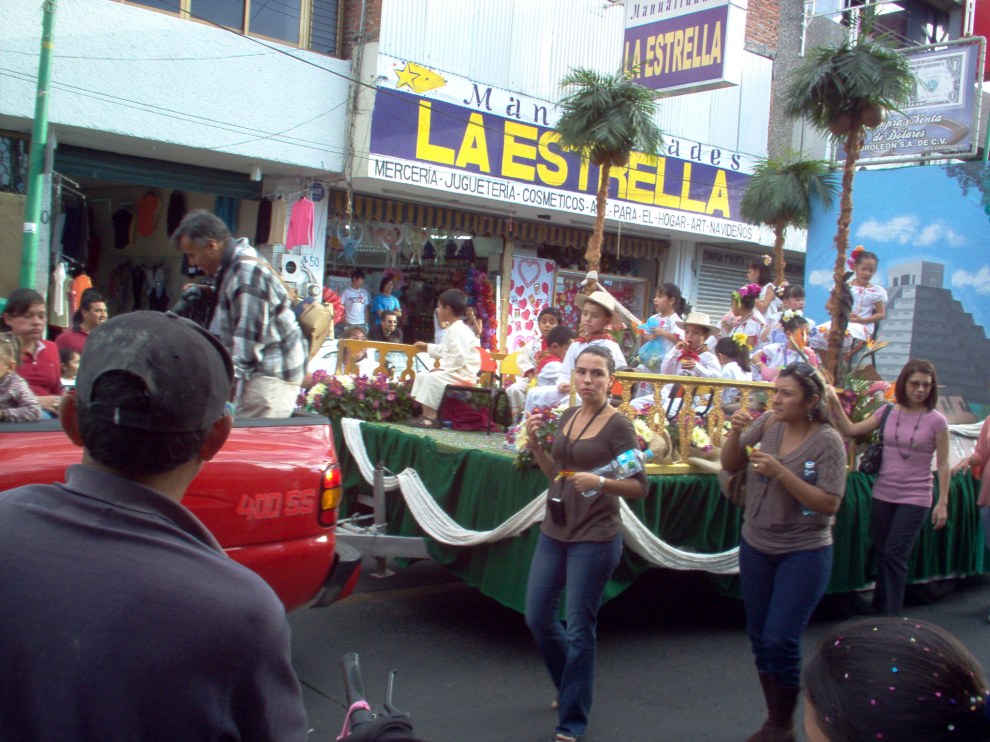 Marching in the kinder parade!

Quite a lot of time is spent on events, Grandparent’s Day, Christmas, Day of the Dead, Children’s Day, Father’s Day, Mother’s Day, Carnival, Independence Day, etc.. Most of these events require the little ones to learn some sort of dance and memorize some poem or song. There are several parade marchings as well. The kids usually ride in floats, but it’s hard on the teachers and parents marching alongside. 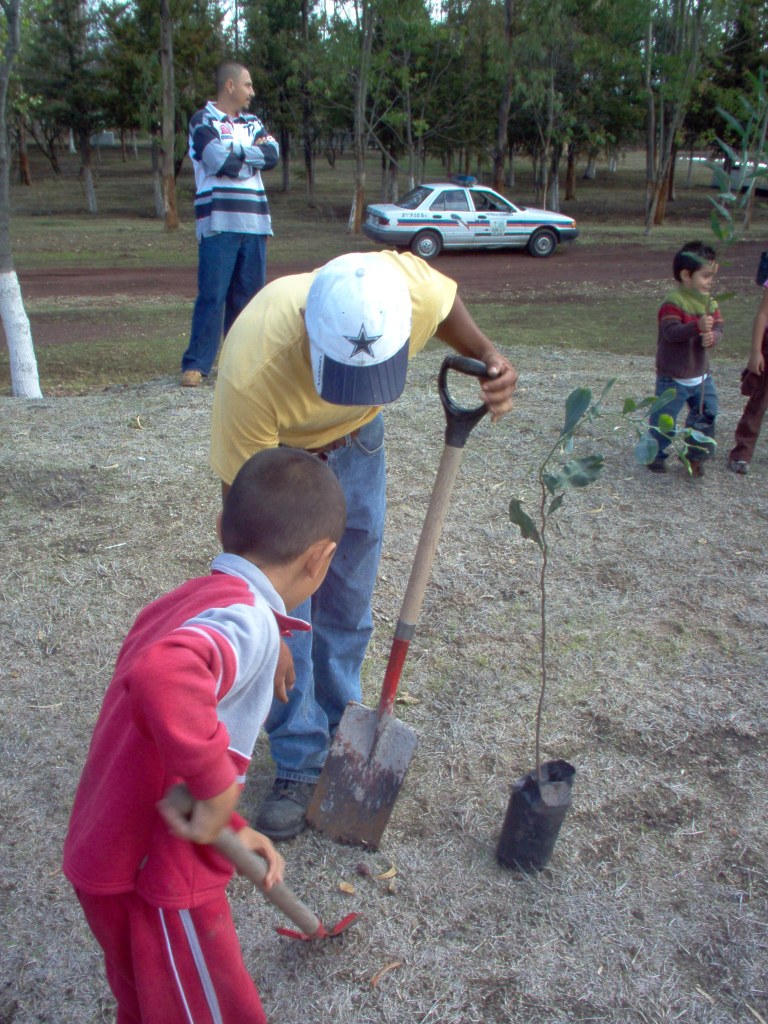 Planting a tree on Father’s Day.

There were some worthwhile activities as well. For Father’s day, dads and kids went to Los Areas Verdes and planted a tree together. For Children’s Day, several parents and teachers took a collection of toys to the remote villages of Los Amoles and Santa Gertrudis, then a clothing donation to La Ciudad de Los Niños (a local orphanage) and another children’s shelter in Uriangato. As the trees were donated, the toys were used, and we volunteered to drive, it really wasn’t much of a sacrifice on the part of the well-to-do parents whose children attended this kinder, but hey, something is better than nothing.

When the 5 and 6-year-olds are ready to leave the kinder, there is a graduation ceremony. At the private school we attended, the boys wore a little tux and girls wore mini-prom gowns to perform a bas (formal dance). They received diplomas and shook hands with the mesa directiva (school board). It seems quite excessive unless you take into consideration the comparable hoopla for first communion ceremonies. 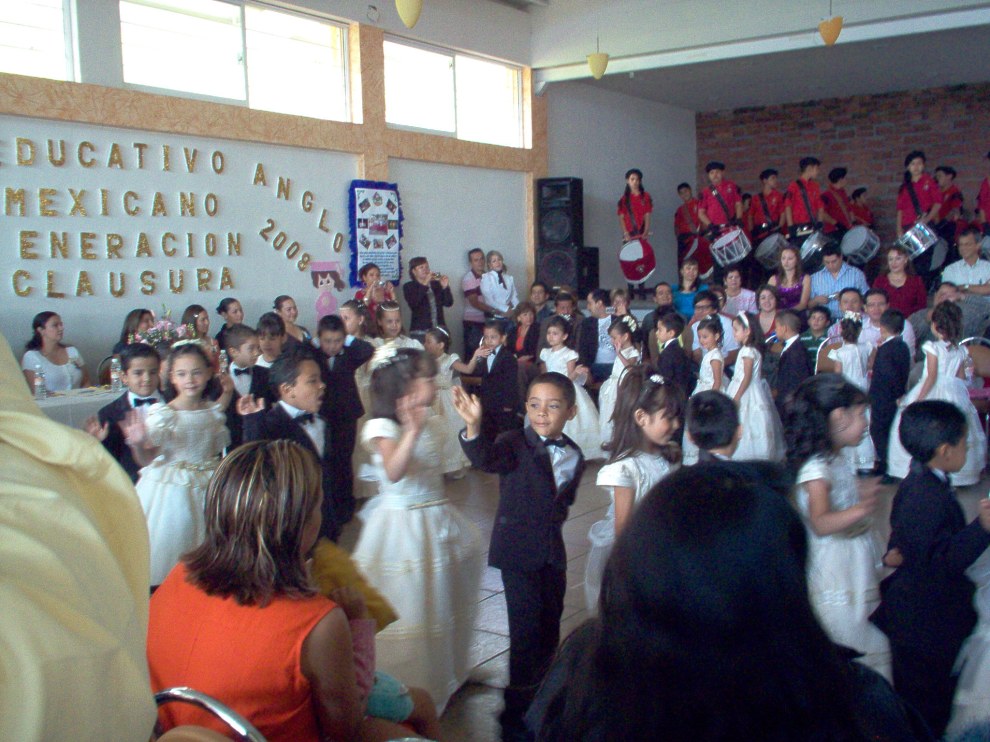 Saying goodbye to the Kinder.

During this school year, we found a little bit of land to purchase, and my husband began working on our home. My son and I would head to school in the morning, then out to the construction site in the afternoons. Saturdays he and I would make the private English class rounds on the moto. He had his own “English” activity book and was an incredible incentive to students just starting out. It was an exciting, but exhausting, period in our lives with all the planning and building and just getting adjusted to the way things go here in Mexico.