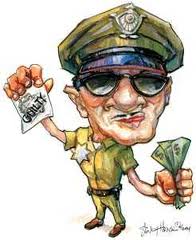 A bribe is often called la mordida (bite) as in a bite of an apple.

So for the past 2 months, the GTO State Police have set themselves up at the crossroads that is the main entryway, not only to La Yacata, but also La Ordeña, Las Peñas, Caricheo, and Pamaceo. These communities are very small, very poor and very targeted by the police for mordidas (bribes). The police’s constant presence prompted me to get my motorcycle driver’s license, however it isn’t an option for everyone. Many campesinos (country folk) are poor readers or illiterate so don’t even attempt to take the computerized exam. Others might not have an electric or water receipt to prove their residence because they lack these services in their homes. Furthermore, many of the IFE (voter’s registration cards) that I have seen from these little communities have nothing more than domicilio conocido (known address) listed since their home has no street name or number. So what’s a body to do?

So on to the story….

Sunday, my husband went to town for huaraches (large cheese and meat filled tortillas) as a special treat. He took my motorcycle rather than his own because I had just filled my tank and he was low on gas. Right after he left, my son and I went for a walk towards the crossroads so I could take a picture of some yellow wildflowers by the side of the road that I had spotted earlier. Just as we came out of La Yacata, my husband’s brother J passed us on his bike. He spent the day in La Yacata reportedly preparing an area to plant maize (corn) but mostly drinking.

We snapped the picture and headed back to La Yacata to wait for my husband. He was gone an unconsciously long time. We tried to call him, but he had left his phone at the house. My son got impatient and decided to head to the store on his bike for some munchies.

My husband arrived 15 minutes later with the huaraches, having been gone nearly 2 hours. Here’s what happened.

At the crossroads, the police stopped my husband on the moto and asked for his license, which he just renewed (See Getting Legal—Motorcycle license), and the tarjeta de circular (vehicle permit card) which he had taken with him, usually it’s in my purse. My moto has placas (license plate) and all the miscellaneous and sundry impuestos (taxes) paid. But that didn’t satisfy the police. They said that the card wasn’t valid, but it was. They said that the moto was stolen, which is wasn’t. They even lifted the plastic to see the VIN and check it against the card. Even though it was all good, they said that they would have to call it in. My husband wasn’t going to pay the mordida (bribe) they were fishing for, so he told them to go ahead and he’d wait. The officer got up in his face and wanted to know if my husband had a problem with him. He didn’t, but intimidation is part of this whole macho-mordida thing.

While they had him wait, he said that they stopped a car heading to Las Peñas. The car didn’t have any placas (license plates) but everything else was in order. The police told the driver that the new law is that you have 9 days to get placas (license plates) from the date of purchase or the vehicle will be impounded. Hmm, as we just purchased a new vehicle, this is good to know. (See Getting Legal—License plates) Many vehicles in the area are chocolates, which is the name for a car brought into Mexico from the United States that has overstayed its permit and not been legalized. (See Getting Legal—Legalizing a vehicle). This isn’t true in our case however.

By this time, my husband’s brother J rode past the policía on his bike. There is no law requiring license plates, nor license, nor helmet for a bike, although I believe there is a law that says you have to register your bike to prove it wasn’t stolen, but nobody does that. So J just assumed the police wouldn’t stop him. However, my detained and “uncooperative” husband waved to him as he passed. The officer turned to my husband and said that he knew that was his brother, then told my husband he was free to go.

The officers jumped into their official police vehicle and drove towards town. Since that was the direction my husband was going anyway, he followed. He arrived just in time to see them take J into custody. His crime? A suspicious backpack. Inside were 3 empty caguamas (liter size beer bottles) and 1 full one. He also carried an ax and hoe—deadly but not concealed weapons. My husband followed them to the jail and signed for custody of J, promising to deliver him safely to his house, which he did. He took him and his suspicious backpack and deadly weapons all the way to Uriangato and left him at the door with his heavily pregnant wife. Then he headed back to town and picked up the huaraches and headed home.

While my husband was retelling this story to me, my son arrived home from the store. He said he had just seen J by the store on the back of a gray moto with some heavy-set man he didn’t recognize. It seems that having 3 empty caguama bottles is a crime against nature and, therefore, he must have left his house minutes after my husband had dropped him off in search of the not-so-elusive cold one. So much for seeing him safely home.

Anyway, police presence also curtailed our driving practice that afternoon. Technically, the State Police only have jurisdiction on the main road. The road that goes to La Yacata and all the other little communities I mentioned is overseen by the transito muncipal (local traffic police) but they hardly ever come out to check on anything. We wanted to take Myrtle, our new VW bug, out for a spin on the local road, but since we didn’t have placas (license plates) yet and the State police were following bicycle riders to town, we thought better of it. So no practicing until the plates are on.

Filed under Driving Hazards, Getting Legal, Safety and Security