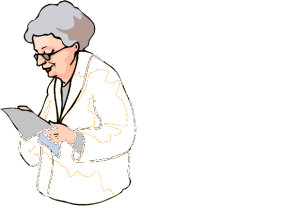 So we went to the Regional in Uriangato, which is the hospital where my mother-in-law died.  My husband had gone the day before to inquire about the procedure and was told by the pharmacy that I needed to make an appointment with archivos (archives) first to open a file.  Archivos (archives) opens at 7 and it’s on a first come, first serve basis. Therefore we were up at the crack of dawn so that we could take animals out to pasture and drive to Uriangato.  It is about a 30 minute trip by moto, but seems much, much longer in the frigid early morning.  We arrived at 6 a.m.

The security guard on duty would not let my husband in, so I took the paperwork and queued up.  The clerk arrived at 7:15 and started processing appointments.  I was about the 10th in line, so it was about 7:40 when I reached the desk.  I explained my situation and showed her my papers.  She looked them over and told me that it was the responsibility of the clinic that gave me the prescription to continue giving me the medication and that if they wanted to send me here, they needed to give me a referral.  Well, they hadn’t and she knew that, so she went ahead and gave me an appointment with a general practitioner anyway.

I checked in at the nurse’s station and had my height, weight and blood pressure checked and returned to my seat.

I was #3, but as the doctor doesn’t begin seeing patients until 9 a.m., I had to wait.  Meanwhile, my long-suffering husband was shivering in the cold.  After 9, he suddenly appeared in the waiting room.  He had waited until the guards had changed, then asked permission to use the bathroom, which was on the other end of the hall where the consulting offices were.  He did use the bathroom, but instead of returning outside, he headed down the hall to see where I was.  By this time, there were so many people, one more wasn’t noticed.

So 9:30 came and it was finally my turn.  I was shown into a small consulting office and sat down in a chair next to a tiny space heater.  The female doctor was at least 80 years old and was extremely disconcerted that I was not Mexican.  She asked me several times if I could understand her questions and each time I assured her I did.  I explained what it was that I wanted.  She then said I would have to be referred to a specialist.  She pulled up her Olympia typewriter and started in on the referral.  She asked where I lived, but didn’t understand me, so I handed her the policy which had our address on it.  Then she asked about my age, place of birth, religion, age that I began menstruating, age that I married, if I had my son vaginally or by c-section (she even mimed this one for me in case I didn’t understand her meaning), and if I lived permanently in México or was just here for a visit.  I answered her questions, but tried to explain again that I had hypothyroidism and told her that I had had preeclampsia and pregnancy-induced hypertension, but she made no note of those issues.  I told her about surgeries I had as well, but again, nothing written down.  She apparently made a mistake on the form, so she pulled the sheet out of the typewriter and started again.

I waited.  When she had finished I showed her the prescription that I had been given at the clinic and told her I needed a refill.  She looked it over and said that she would write a prescription and that I would need some blood work too.  That seemed reasonable, since in the States, I would periodically go for TSH level blood tests.  I thought perhaps she had understood my problem after all. Silly me.

I was there about an hour while she filled out these forms.  She made no attempt to examine me and when we were finished she asked if I felt I had been treated fairly.  I suppose I had.

So then, I went back to archivos (archives) to schedule an appointment with a specialist.  There the clerk gave me pink appointment booklet and scheduled the appointment with Dr. J for January 30 at 9 a.m.  Then I went to the lab desk to schedule an appointment for the blood draw.  That was set up for January 27 at 7 a.m.  Finally, I went to the pharmacy to fill the prescription, but they didn’t have the medicine there.  Since I was already late for work, I didn’t have time to hunt down some other pharmacy.  I sent my husband later in the day to find the referral pharmacy and get the prescription filled.

Tagged as getting a prescription filled in Mexico, Going to the doctor in Mexico, health issues in Mexico, Mexican Public Health care, Seguro popular in Mexico