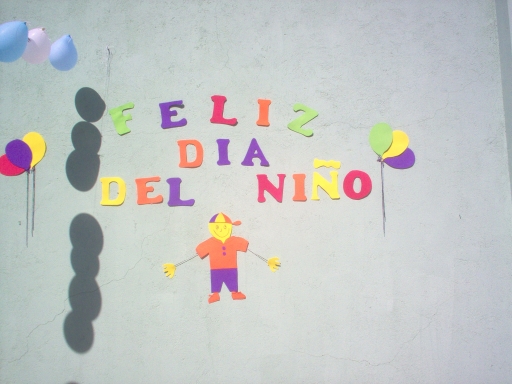 April 30th in México is El Día del Niño (Children’s Day). I love this holiday! The main idea is to celebrate childhood and the children in your life and hasn’t gone too commercial yet. It isn’t about giving your kids toys. It’s about spending time with them–which is priceless.

So this April 30th, the school where I work on Saturdays sponsored a Children’s Day event–free to the public. About 200 hundred children in the immediate area were given an invitation that included a small bag of candy. Come the day of the event, 20 children attended. Well, not to be discouraged, we made the most of it. We played with a parachute. We played red light–green light. We had a tug-a-war contest. We played musical chairs. We did Zumba. We played gallitos (Little Roosters) which is a game where balloons are tied around the kids’ ankles, and then the other team tries to stomp on them. (Anyone who knows me will tell you I personally hate this game since I have a moderate balloon phobia. However, someone else directed it, and I went and hid upstairs until the last balloon was gone.) We kicked the soccer ball around and generally had enormous fun. Prizes were simple, hula hoops, yo-yos, piggy banks, and balls.

Of course, there were a few stick-in-the-muds. One little boy brought his PSP. I found him tucked away in the corner of a classroom playing in complete isolation. I took his game away and made him come out and do Zumba. Twenty minutes later, there he was again, hiding under some desks with his game. I threw my hands up in exasperation. Another little girl had some difficulty integrating at first–the kids ranged in age from 2 to 13 and most didn’t know each other from Adam–but about halfway through the event, she was out there tugging her little heart out with her team.

My son, of course, was there the entire time, from set-up to clean up, the price he pays for being the teacher’s kid. He even tortured his poor old mom with some balloon popping fun. There was no doubt he had a great time.

But when we got home, he was a regular gloomy Gus. He was disappointed that not one of his classmates came to the event. He asked me why he couldn’t be just like everyone else and have friends that come over and visit.

That was a two part question, so I addressed them separately, although the answers were somewhat related. I asked him if he had a good time. Of course, he did. I asked him what he thought his friends had done instead of coming to the event. Watched TV or played video games. I asked who actually lost out–my son or his friends. Well, his friends, because he really had a good time. So I said that no, he wasn’t like everyone else and probably never would be, because he participates in the opportunities life presents, and that wasn’t a bad thing.

Then to answer the second part of the question, I asked why he thought his friends didn’t come to visit him. The obvious reason is that we don’t live in town and coming to La Yacata requires a bit of effort, not because his friends did not want to play with him. He wasn’t entirely satisfied with that answer and said he would rather live in town.

I know that at his age (nearly 11) socialization is the end all and be all of his existence. I feel guilty as a parent sometimes that he doesn’t have any brothers or sisters to play with and that we live isolated from the bulk of the population. I also feel guilty that that way we have raised him creates a feeling of an outsider when all he wants to do is fit in. His values and priorities are different than the mainstream. I have tried to make him a citizen of the world, and I may have succeeded too well and made him belonging to nowhere.

Yet, as agonizing as he finds pre-adolescence, having gone through it myself, I know that one day he will discover that “the road to a friend’s house is never long” and that acceptance does not guarantee happiness. Meanwhile, I will love him unconditionally through the prickliness and tears and laughter and joy with the hope that it will be enough.