Who owns what? Phase 6 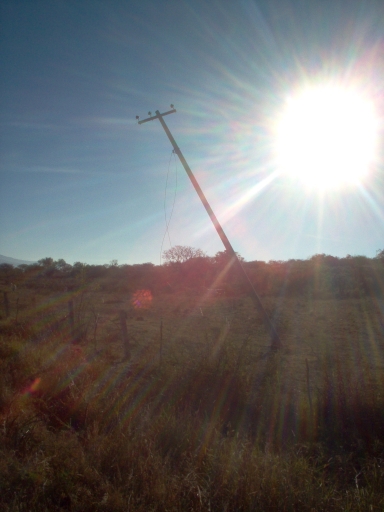 With the wires cut and stolen, the tension was reduced, but the posts were still leaning.

So another week or so passed. Then a group of men came and started marking the roads. We hadn’t sent them to do any measuring or marking and when the workers were asked who they were working for, it was “Ingeniero Ching” which led us to suspect Chuchi. They finished their lot markings,  all of manzana (section) 7-C which I knew to belong to one owner, not being Jesus, and went on their merry way.

Another week passed. We were out with the goats and happened across Chuchi with his plans and certificates. Seems he was making out new certificates for the lots he had marked. I called the owner and told his secretary that Chuchi was in this very moment selling lots. His brother arrived about 15 minutes later, then he himself, but Chuchi had already gone. They were both angry enough to go and visit Chuchi in his home.  Chuchi said that things would continue as they always had done and called the police on the brothers to have them removed from his home.

In addition to this, a man came the week previously to locate his lots. He had bought the lots from the engineer who put the tubes down for the sewer some 10 years ago. I checked the records and lo and behold, there was another registered owner. Seems Chuchi had given an entire section of lots to this engineer in lieu of payment. So I explained this to the man, who was angry, but decided he needed to go and straighten this out with Chuchi. So what happened to the money that the colonos (associates) paid for the work? Right into Chuchi’s pocket.

We have been working hard to contact the persons we know to be owners of land in La Yacata.  The son of the original owner decided to call a meeting, requesting copies of payments and certificates to try and find out how much money Chuchi had received.  Hopefully, we could use this proof to put a demanda (lawsuit) against Chuchi for non-completion of something or other.  My husband complains that we ought not to be working for free, but I felt that in the long run, we will benefit as members of the community there.  Volunteering doesn’t bother me, although personal funds were in mighty short supply just then.

Chuchi continued selling lots, even to calling and offering deals to prospective buyers.  A few have thought to investigate a bit further and been referred to us, so did not fall into the baited trap, but others either didn’t suspect or didn’t care.

Along the way, we had another community meeting and proposed that the original owner’s son be elected as president of the association.  As R had yet to register his presidency, this wouldn’t necessitate any additional paperwork, but might just be the motivation we needed to make some real progress.    In order not to completely alienate R and his cronies, we suggested that he be the secretary in place of el plomero, who really didn’t have time to devote to this endless stream of meetings.  Even so, R’s feelings were hurt.  I was unanimously reelected as treasurer.

It was quite a job organizing these receipts that come in, but we now had about 100 out of 650 that were more or less verified. We also decided that since Chuchi was still using the old certificates to sell and resell lots, that to protect our interests and the interests of the other rightful owners, we would issue new certificates signed by all members of the mesa directiva (community representatives).

The changing over of certificates took longer than expected. A full 6 months since we started and we were nearly half way through. The problem was contacting the owners. We had a tentative list of property owners and had made efforts through printed notices to contact those on the list, however, some had sold their lot, moved, or were currently in the US. Daily though, we had visitors to our house in La Yacata. Some on foot, some by moto, some by donkey or horse, some came on the bus, some in cars or trucks, and some have even come in taxis, just to visit us and bring their copies.

Then there was a problem with multiple owners of the same lot.  That has taken some doing to straighten out. We, or rather I, have had to tell a number of people that they had been defrauded and needed to register a complaint against Chuchi with the Ministerio Publico (Public Ministry) however, to date, I have yet to hear of any of these victims making a formal complaint.  It’s free, however, it is time-consuming, as is anything bureaucratic here in México.  There is also the fact that most of these owners are campesinos (farmers) and not well educated.  Some can barely write their own names.  To expose themselves and their illiteracy and the shame that they had been taken in by a glib talker, may be too much for them to do.  And so, those that have take more, and those that have not, continue to do nothing about it.

One response to “Who owns what? Phase 6”