The house gets a facelift

That’s not to say that there aren’t some other projects we’ve been working on. The cement, sand and gravel left over from the roof project was put to good use. We spent Easter vacation putting on a pestaña, (eyelash) on the front of the house. This entailed filling in the existing exterior ledge at an angle and smoothing it over, ready for tejas (roof tiles) which we haven’t purchased yet. For filler we used black pumice stone, easily found in our immediate area, because of it’s light weight. 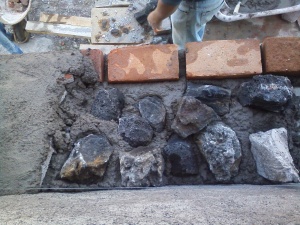 This was a 3 person job. My son gathered and tossed up the pumice stone. I filled and transported the buckets of mortar to the dump site out the window and my husband did the actual construction. Since we still had some cement and the scaffold was already rented, we went ahead and patched the front of the house too. Patching reduces water permeability and will allow us to paint it, which will happen whenever the budget allows for it. 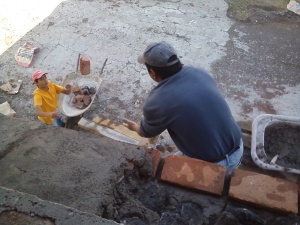 I’m pretty impressed with the results. Our home is starting to resemble my idea of a house. I think it looks quite friendly. Wouldn’t you agree? 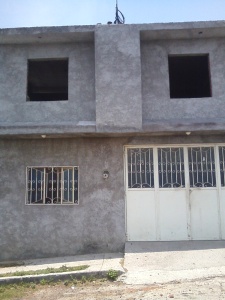