Welcome to the ‘Look At All The Women’ Carnival: Week 3 – ‘The Eclectic Others’

This post was written especially for inclusion in the three-week-long ‘Look At All The Women’ carnival, hosted by Mother’s Milk Books, to celebrate the launch of Cathy Bryant’s new book ‘Look At All The Women’. In this final week of the carnival our participants share their thoughts on the theme ‘The Eclectic Others’ (the third, and final, chapter in Cathy’s new poetry collection).

The Virgen de Guadalupe (Virgin of Guadalupe), a.k.a. Nuestra Reina de México, La Empresa de las Americas and The Protectress of Unborn Children, is the most revered religious and political image in México and her only noteworthy act was to appear on a hill top and instruct a peasant to build a shrine in her honor, make an image on a cloak appear miraculously and speak Náhuatl, oh and somehow also be the ever-virgin dark-skinned mother of Christ. (See  Christmas in Mexico—La Virgen de Guadalupe)

I say the position and title of Mother of México belong, not to La Virgen, but to another woman, one reviled in Mexican history so much so that her very name is used to mean traitor, one who prefers foreign to Mexican. (malinchista) Yet, this woman’s life story is one that women, especially Mexican women, can find evidence of a life well-lived despite the circumstances she found herself in.

La Malinche, Malinalli, Malintzin, known as Doña Marina to the Spaniards, was born sometime between 1496 and 1501 into a noble family in the Paynalla province of Coatzacoalcos, in the Veracruz region of southern México. She was named “Malinalli” after the Goddess of Grass, and later “Tenepal” meaning “one who speaks with liveliness.” When her father died, her mother married again and had a son. In order for the son to inherit her former husband’s estate, Malinalli’s mother sold her to slave traders but told the neighbors that Malinalli had died, even presenting the body of a dead slave girl to bolster the lie.

In the course of her early slave life, Malinalli learned to speak Mayan in addition to her native Náhuatl. Eventually, she became the property of the Cacique (ruler or chief) of Tabasco. During this period, Hernán Cortés arrived in Tabasco. The Maya gave the Spaniards food, cloth, gold, and slaves, including 20 women, one of whom was Malinalli.

In order for the new Spanish owners to take the women as their own, they were purified through baptism and given Spanish names. Malinalli was given the name Marina at her baptism in 1519. Cortés then gave the newly converted women to the highest-ranking officers. Marina was given to Alonso Hernández de Puertocarrero. After a month, when Alonso Hernández de Puertocarrero returned to Spain at Cortés’ orders, Marina became the property of Cortés. 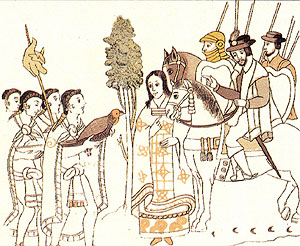 Marina began her career as a translator for Cortés at this point, first through Jerónimo de Aguilar who translated from Spanish to Mayan, then later without intermediary when Marina learned Spanish. She became known as Malintzin, the Nahuatl suffix “-tzin” denotes respect, among the indigenous people they visited and Doña Marina among the Spanish. The title Doña was used to indicate the bearer was a lady, nobly born. Both groups, therefore, recognized that she held a position that was more than a slave.

So where did the name La Malinche come from? Cortés was known as Malintzin-é among the indigenous people. Attempting to pronounce this Nahuatl name, Spanish-speakers rendered the soft Nahuatl tzin-é sound as ch; the result was Malinche. As Doña Marina was never far from Cortés, she became known as La Malinche, the feminine version of Cortés’ name. Some scholars argue that Malinche can be translated as Captain and La Malinche is the Captain’s Woman, or perhaps Cortés received his status through Malintzin and the titles should be reversed. He himself gave her some credit when he wrote in a letter to Spain, “After God we owe this conquest of New Spain to Doña Marina.” God, after all, did provide the Spanish with smallpox and greed which led to the decimation of the indigenous people. In comparison, Doña Marina played a much smaller role of translator, negotiator and adviser.

All accounts show that Doña Marina was extremely loyal to Cortés. This does not mean she was a traitor to her own people, however. It is clear from the records of the time that she saved countless indigenous lives by forging alliances between the Spaniards and the native groups. She also actively encouraged the Spaniards to negotiate rather than fight. She was not always successful in keeping the massacres from happening, though.

Doña Marina’s role in Mexican history was not limited to the political arena. She had a son by Cortés in 1522. Their son, Martin, was taken from Doña Marina and sent to live with Cortés’ cousin when he was two years old. In 1526, Doña Marina was married to Juan Jaramillo, although whether the marriage was by force or by choice is not clear. After all, Cortés already had a Spanish wife and couldn’t or wouldn’t marry the indigenous mother of his son. Cortés later took a second wife, who bore him a son also named Martin. The second Martin inherited all of Cortés’ estates in Spain and in New Spain after his death in 1547.

In 1527, Doña Marina had a daughter with her legal husband Jaramillo, named María. Her husband remarried the following year and attempted to disinherit their daughter. Although many scholars say that Doña Marina died in either 1527 or 1529, there are some who say that based on letters to Spain, she may not have died until 1551. Perhaps her death was faked and her child taken from her so that someone else would inherit her estates. It wouldn’t have been the first time for either event in her life.

I can only speculate what might have inspired Malinalli through her life’s journey. Perhaps she saw something more than what was and worked with what skills she had to make it real. Perhaps she despised the system that kept her a slave and worked to destroy it, only to find out that she had traded one set of chains for another.

The truth is that she birthed a new people, a new world, a new life, something more than what was before. She should be honored, not reviled for her acts. Like the Goddess of Grass that she was named after, Malinalli bent but did not break in the storm that ravished her country.

For more information about this incredible woman:

Look At All The Women is now available to buy from:

The Mother’s Milk Bookshop (as a paperback and PDF) – we can ship books around the world!

and as a paperback from Amazon.co.uk.

It can also be ordered via your local bookshop.

If you’d like to know more about Mother’s Milk Books — our submission guidelines, who we are and what we do — please find more details here:

Please take the time to read and comment on the following fab posts submitted by some wonderful women:

‘Heroines and Inspirations’— Cathy Bryant, guest posting at Mother’s Milk Books, shares two of her own powerful, inspiring poems, and the stories behind them.

‘Sensitivity’ — Marija Smits shares a poem, with an accompanying image, that gives a glimpse into the inner workings of a highly sensitive person.

Georgie St Clair shares her creative female heroines in her post ‘Creative Others: Mothers Who Have It All’

‘The Eclectic Others – Or What Would I Have Been Without You?’ — Kimberly Jamison posts to her blog The Book Word a thank you to the women of literature and history who have been in her life, shaped her life, saved her life and gave her a future.

‘Barbie speaks out’ — Ana Salote at Colouring Outside the Lines shares a platform with feminist icon, Barbie.

‘Her Village’ — An older (much older than most) first-time mother, Ellie Stoneley from Mush Brained Ramblings firmly believes in the old African adage that it takes a village to raise a child. To that end, she has surrounded her daughter with the love, mischief and inspiration of an extremely eclectic bunch of villagers.

Survivor writes about the inspiring life of La Malinche and her place in Mexican history at Surviving Mexico: Adventures and Disasters.

Sophelia writes about the importance of her community as a family at Sophelia’s Adventures in Japan.