A Day in the Life in rural Mexico State

Daisy shares a day in the life in a small town in the state of Mexico.

What is my typical day like? Well, it starts off pretty early in the morning, as I regularly get up around 4:30 am to teach Chinese students online. There are a million companies out there, some needing a degree, some not, but most paying between 15 and 25 dollars an hour. I am lucky enough (or unluckily enough, since those student loan payments are still a burden) to have a BA, but in addition, I got my TEFL off of Groupon for 39 dollars. I haven’t had it turned down once since most companies just want to be able to tell students (and their parents) that the teachers have a piece of paper.

But wait! What about me? Well, I have been living in rural Estado de Mexico–central highlands, altitude 8000 feet where I often wear sweaters in my house even in summer-close to Mexico City but quite countrified–for the last 8 years. My husband is Mexican and my two children (8 and 3) were born here. I never had a plan to move to Mexico but once life circumstances put me here, it was like I was made for it!

Compared to the families around me (a good proportion of whom I am related to by marriage) you might say my husband and I are a bit unconventional. I work from home, online teaching and WordPress support, while he is in charge of the kids. Since schools have a nasty habit of informing the parents the day before of some vital meeting or big project due, it’s nice to have someone not working. Plus, he made such a small amount of money for the long hours he worked, I worked really hard to convince him to leave his job and just do side projects when he was bored. It’s not always easy on his self-esteem since it he is the only stay at home dad most people have seen before, and it goes against the strictly defined gender roles of the area, but it works for us.

Working online has enabled me to really add to our creature comforts. There is nothing like the satisfaction of a hot shower, after taking bucket baths for several years. I used a contraption like this to heat our water; basically, electric coils wrapped around a block of wood. It is the same concept used to heat up water in an electric kettle, but it was a shock when I first saw it. It’s totally safe, you just have to remember to NEVER test the water by touching it! 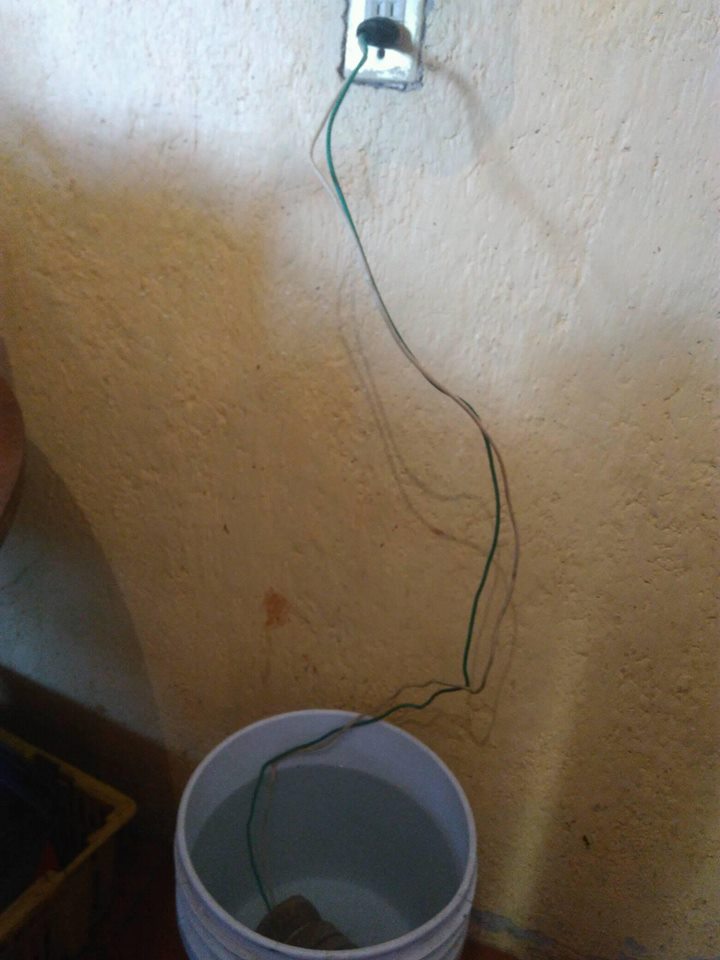 As I mentioned, I get up early, work a few hours with the Chinese schools, then do some hours with another online ESL company that has daytime hours.. I try to not work from 12 to 3, since that is the main meal time in Mexico. I cook while he goes and picks up the kids. Then after we eat our main meal, I go back to work while he helps with homework and coaches his soccer teams. We don’t eat any processed foods, and I buy all our vegetables, meat, and fruit and local mercados (markets) or shops, not in the grocery store. It just seems fresher to me, and I like buying from the exact same person I have been buying from for the last 8 years, and knowing I am supporting that individual instead of a corporation.

If it is the weekend, you might catch us at a party that we can fully enjoy, knowing we helped pay for it. Cooperation is still alive and functioning in my area, where there is a great big circle of party love going around and around. I am proud to be asked to be the madrina (godmother) of the bouncy gym, tents, etc since these same people did the same for me when I had my daughter’s tres años presentation (3-year-old presentation). I only paid for the food!–which was still a lot, considering it was for 300 people! I know that some people have not had good luck with this sort of setup, but it works very well where I live–and I really think it strengthens the ties that bind the community together. When it works, it is a great deal–entertainment for the whole family, food, and drinks, for about 1500 pesos–the same amount you might spend at a semi fancy restaurant. I still consider myself lucky I landed in an area where people dance cumbia instead of grupero or norteño.

I often rage on expat pages because of their ignorance of how difficult life is for average Mexicans. I think that they have a Pollyannish attitude about corruption and crime, such as murders and kidnappings that can fall heavily on rural areas, but which don’t usually affect expats living in tourist areas.  Even though I am lucky enough not to live in a narco area, my house has been broken into several times here, and we have a big problem with assaults on buses. If you are a woman in an abusive relationship….good luck. I have seen several cases where the police refused to file charges, even with physical evidence of abuse. I think the issue is the impunity. Hardly any crimes are solved here, and people don’t feel they can rely on the police to help them. That is the big difference to me.  I think what happens with the Pollyanna folks that if you have everyone asking you constantly why you would go to such a dangerous place, you want to defend Mexico’s honor but if you are here, you want to defend the people who are suffering and not getting help from their government. Having said all that though, I feel quite safe and  I love that my children can play outside in a great big mob of 20 cousins with no supervision; I love that they can explore their independence by walking to the store alone (well, with 5 cousins in tow). Yes, we have tablets and TV, but the majority of their time is spent outside playing, which lines up perfectly with my beliefs about how to raise emotionally resilient and communicative children.