Who’s on first? in Spanglish 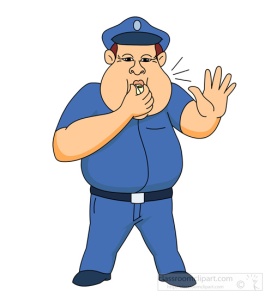 So last night, my husband gets home around 10:30, a bit worse for wear and unlocks the door. Before he can even pull the motorcycle in, a police vehicle arrives and he is accosted. He wobbles in the bedroom,wakes me up and says the police are here. WTF? So I stumble around looking for my glasses and drift to the front door, pink fluffy PJs and all. There seems to be some doubt as to whether or not my husband lives here. I’m a bit confused, groggy from sleep and ask what this is all about.

The short chubby police officer has his light right in my eyes. I’m sure it’s a technique they teach at asshole school. He says “Recibimos un reporte de que una casa fue robada aquí” (We received a report that a house was stolen here) or at least that’s what my foggy brain heard. I think what he meant was “Recibimos un reporte que se meterian a una casa para robar aquí” (We received a report that someone had broken into a house in order to steal things). But since he said what he said my question was “¿Cómo robaron una casa?” (How could someone steal a house?). I had visions of a house being jacked up and carted away. No lie! But my brain dismissed that as preposterous because the houses in La Yacata are made of stone, cement, and brick–much too heavy to haul away in the back of a pickup much less my husband’s motorcycle.

The light bearing policeman amended his comment. “Se metieron a robar algunas herramientas.” (They broke in to steal some tools) Again, my imagination went into cartoon mode and I saw the big bad wolf breaking into a house to steal a hammer. He may have meant the rebar and other construction materials that many of the half-finished dwellings in La Yacata have. But that’s not what I understood.

There was still some doubt as to whether my husband lived here. As I was obviously in my pajamas, I guess they decided I was a legit resident. Who wears pajamas to steal tools at some random abandoned house? My husband whips out his driver’s license. I have no idea why he did that as his license does not have La Yacata as his residence since we have no street names. (See Getting Legal–a driver’s license) Officer Chubs took it and asked him his name. I guess he was convinced because he did no more than instruct my husband to pull his motorcycle inside.

My husband could not leave well enough alone. He wanted to know who had called in the report that there was a robbery in progress in La Yacata. Officer Chubby mumbled something about it being anonymous and hopped back in his vehicle.

Remember, my husband was still tipsy, so the moment he gets the motorcycle inside, he accuses me of having called the police. I just want to get back into bed, but he follows me. He wants to know why I called the police. I said I hadn’t, but he wasn’t convinced. I tried to use logic and asked if he had been breaking and entering, but logic doesn’t work on a drunk (in case you ever feel compelled to try it).

He is determined to get to the bottom of this, so he called 060 which is like the dispatcher number. Or at least that’s what he thinks he called. Remember, he’s a bit impaired at the moment. Some woman answers the phone and he asks who called in the report that there was a robbery in progress in La Yacata because there was a patrol car outside. He asks a couple of times and I think the woman just hung up since it wasn’t an emergency. Like she was going to give out that information anyway.

So this morning, now that I’ve gotten my beauty sleep, I think this whole incident is hilarious, especially since nothing bad happened. I believe that the patrol truck followed my husband from the main road, determining that he was drunk and hence susceptible to extortion. He put a knot in their plan by going into the house before they could do whatever it was they were planning, maybe stop him for his tail light being out or something. So the story of there being a report on a B&E was pulled out of thin air to give their presence some legitimacy. When I came to the door, they realized there would be a witness, and a gringa witness at that, so the plan to collect a little Xmas bonus had to be scrapped.

My son, who had stayed snuggly in his bed during this altercation, said he couldn’t believe what happened, especially my obvious misunderstanding of the spoken Mexican Spanish. Well, so sue me. There are just some things that I don’t get, even after 10 years, especially being awoken from a pleasant sleep to talk to police who were obviously up to no good. (See Christmas in Mexico–Aguinaldo)

Tagged as mordida, police corruption in Mexico, police in Mexico, safety and security in Mexico

4 responses to “Who’s on first? in Spanglish”